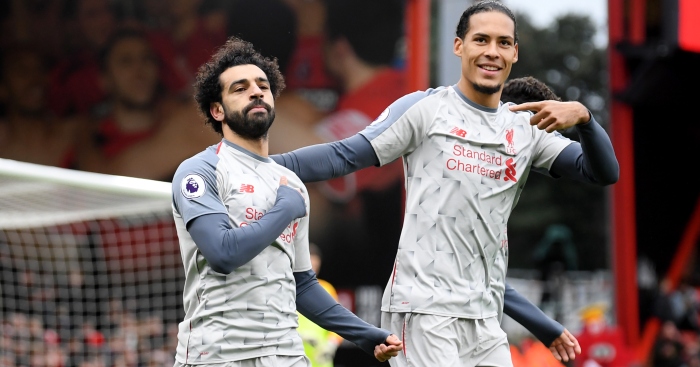 “It clicked again. He’s there.”

That was Jurgen Klopp’s verdict on Mohamed Salah prior to the dismal trip to PSG almost a fortnight ago. Three goalless games followed but the Egyptian belatedly proved his manager’s point during an unexpectedly serene cruise to the top of the Premier League table at Bournemouth.

Salah has certainly been feeling his way back into form over recent weeks. By his own ridiculous standards, his was an iffy start to the season. Not only were the goals missing but his touch lacked the razor-sharp edge of last term.

The Reds star could offer strong mitigation. Salah has been worked into the ground during 2018 while breaking records for Liverpool and carrying on one bad shoulder the expectation of a nation to the World Cup.

The Egypt icon scored three goals in his first 11 games of the season while he shook the weariness out of his legs. Salah was also tasked with becoming accustomed to a new role. In an attempt to stiffen his rearguard, Klopp has dabbled with different formations. The experiments have yielded staggering results, with Liverpool’s previously-porous defence becoming not only their greatest strength but also the most effective unit in Europe.

Klopp’s 4-2-3-1 or 4-4-2 have seen Salah play a somewhat more selfless role as the spearhead of this Liverpool team. A small tactical tweak has had larger consequences, especially for a player not in peak condition. But at the cosy Vitality Stadium, Salah looked as comfortable in his position – and his body – as he has since the spring.

This was the first time this season that the game looked too simple for Salah. Bournemouth failed to offer the stubborn resistance expected of them, especially during a first half in which Liverpool looked braced for a now-expected burst of early Cherries intensity that simply never came.

But any disappointment in Eddie Howe’s side should not tarnish how impressive Salah was. Each of his three goals offered different layers of proof that his form is back.

7 – Mohamed Salah has now scored the opening goal of the game on seven occasions in the Premier League this season, at least two more times than any other player. Sharp. #BOULIV pic.twitter.com/tgrcTj0K8s

Bournemouth will rightly argue that Salah’s opener should have been ruled out for offside, but it was the perfect centre-forward’s goal. Salah offered a target which Fabinho hit with his pass and bounced the ball off in a single touch to his strike partner Roberto Firmino. Asmir Begovic failed to field the Brazilian’s awkward effort and, after creating the opportunity, Salah was first on the spot to make sure it was taken.

His second highlighted the determination and single-mindedness that drove him to 44 goals last term. After collecting Firmino’s pass, Salah engaged his tunnel vision on the way to goal. Cook tried cynically to stop him by targeting his Achilles with his studs and with most other forwards, the outcome would be a free-kick and a booking. But Salah didn’t feel the blow until after he had rolled the ball into the bottom corner, killing the game before the second half had really begun.

Cook was run ragged all afternoon by Salah and as his subsequent dizziness perhaps contributed to his own-goal. The Bournemouth defender was again left choking on Salah’s dust when the striker grabbed his hat-trick goal.

Salah’s third was the most pleasing of the lot for Klopp. Walking the ball into the Bournemouth net after using strength, then speed and finally skill to put Cook and Begovic – twice – on the floor showed the swagger was back.

After struggling in those opening 11 games, Salah has nine goals in the 11 since. The perception was that Salah was has been sat in the slipstream of his team-mates while Liverpool moved through the gears, but with the forward now approaching top speed, Napoli and Manchester United will struggle to keep up in the coming week.