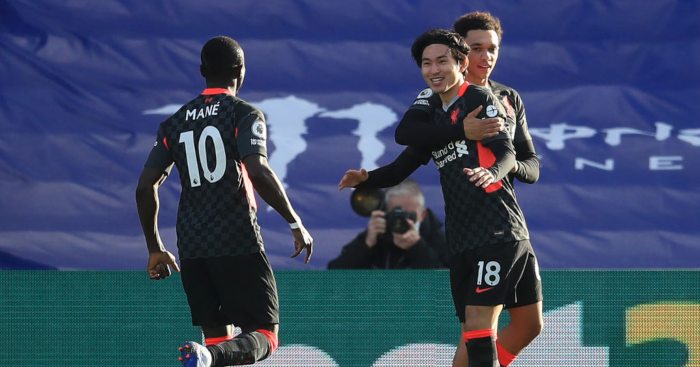 Jurgen Klopp highlighted the importance of Takumi Minamino to his Liverpool squad by starting him over Mohamed Salah in a 7-0 win over Crystal Palace on Saturday. The Japan international paid back the German manager’s faith and helped increase the Reds lead at the top of the tree in time for Christmas.

There was a lot of excitment surrounding the arrival of Minamino this time last year after he swapped RB Salzburg for Liverpool. If you’d watched his performances that season in the Champions League in particular, you would have been impressed with what you’d seen. The 25-year-old contributed two goals and three assists, including a goal at Anfield, as Salzburg finished third in a Champions League group with Klopp’s men and Napoli. Added to his Champions League exploits, his five goals and six assists in the Austrian Bundesliga made him look like an exceptional bargain for £7.25m.

Although his first year at Anfield probably hasn’t gone as he would’ve wanted, Klopp has never doubted that he would come good eventually. When asked about Minamino’s lack of game time in November, Klopp claimed his “time will come, no doubt”. That chance came against Palace with his only other Premier League start coming in a 1-1 draw against Brighton, where he was deployed in a three-man midfield. He struggled to get into the game at the Amex Stadium last month but there were no such issues at Selhurst Park on Saturday.

2:05 – This is Liverpool’s earliest Premier League goal in away game (125 seconds) since November 2014, when Rickie Lambert scored after 90 seconds in a match against Crystal Palace at Selhurst Park. Repeat. pic.twitter.com/V5f8oFXCWp

Klopp even dedicated his programme notes ahead of their victory over Tottenham to Minamino, he said: “I’m not usually a fan of singling people out but I think Taki Minamino is someone I want to highlight. Taki has been sensational for us since he came. His attitude is of the highest level always. Commitment to improving is total. He has had to be patient and at times I can imagine that’s been quite difficult. His lack of starting opportunities until now is not because of anything he is not doing well, it’s because the players in his position have been so consistent in their delivery for our club.

“But Taki points the way for everyone when it comes to setting an example. He gives everything he has, each day he is with us. Recently we have used him in central midfield and he has embraced this so positively. This is what we need from everyone if we have any chance of having a successful season. When an opportunity presents itself, throw yourself into it. For the team!”

He certainly threw himself into it against Palace. Minamino looked a lot more comfortable on the left-hand side of a front three alongside Roberto Firmino and Sadio Mane, with Salah left on the bench. The Japan international probably wasn’t the best player on the pitch for Liverpool, with Firmino taking that accolade but his contribution was vital. Liverpool opened the scoring through Minamino after only three minutes, his lovely delayed finish laid the foundations for a stunning victory for the Reds. Palace had a handful of good opportunities over the next 15 to 20 minutes and the match could’ve gone in a different direction if it wasn’t for his early effort. It was Minamino’s first goal in his 18 Premier League appearances and he will be hoping for many more days like this. In that role, he certainly looks a great addition to Klopp’s winning machine.

7 – All seven of Liverpool’s goals were assisted by different players (Mane, Firmino, Robertson, Alexander-Arnold, Salah, Matip & Oxlade-Chamberlain), the first time in Premier League history seven different players have assisted a goal for a team in a match. Feast.

Mane, who distressed Palace’s backline throughout, added a wonderful second for Klopp’s men on 35 minutes and from then on it was an awful afternoon for Roy Hodgson and his side. The Senegal international ended his longest run without a goal after going nine matches without scoring. Liverpool’s finishing was clinical but Palace didn’t turn up in the second half as the Reds ran riot. Firmino knocked in a lovely third before he and Henderson took the score to 5-0. Salah grabbed two more off the bench and is one of the main reasons why Minamino will struggle to get a consistent place in their side, without injuries.

This was a performance of champions from Liverpool which has taken them six points clear of second-placed Tottenham, who play Leicester City tomorrow. The Reds haven’t been as clinical in recent weeks but that was more like the Liverpool from the last couple of seasons. It’s bad news for Spurs and bad news for the rest of the league, with many of the opinion that the title race could be closer this season. If other clubs fail to respond this weekend it could another one-sided title race. Over to you, guys.