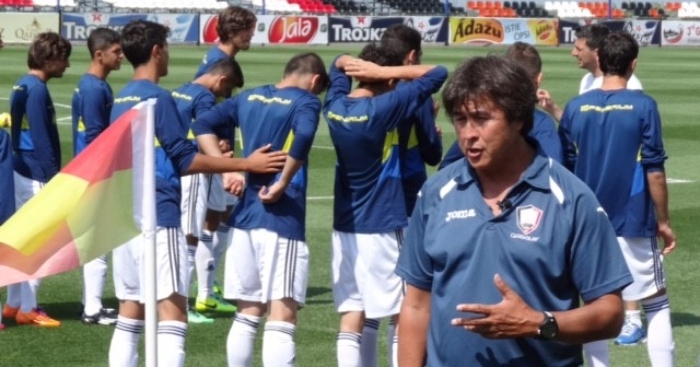 When FK Gabala crashed in their third goal at Moldova’s Sheriff Tiraspol stadium towards the end of last year, it signalled that this is a youth team that means business on the European stage. Ultimately, German giants Hertha Berlin would send FK Gabala out of the competition, but this season’s performance showed encouraging signs of progress. Sheriff’s senior team have utterly dominated Moldovan football – winning 10 of the previous 12 league titles, in comparison to their opponents, who had won none. However, if you want to see the direction of travel, the youth team is where to start and in Gabala’s case, there is a lot to be excited about.

As a remote town in the Caucuses, Gabala is not your traditional setting for developing a professional youth academy, capable of producing players able to compete on Europe’s highest stage. Indeed those were my thoughts when I first arrived. However, thanks to a patient and committed effort by Gabala FK’s President Tale Heydarov and his team, a side that once upon a time barely a stadium now boasts the most productive youth academy in all of Azerbaijan.

Today, FK Gabala academy graduates account for 70% of the Azerbaijan national team, allowing the club to reasonably claim to be the ‘nation’s youth academy’. This has translated into tangible success, with the country’s UEFA coefficient improving ten places since the start of the decade. In this season’s UEFA Nations League, the senior team lost just one of six games. They continue to dream of a place at Euro 2020.

Historically there are only a handful of examples of club youth academies dominating their national game in such a way. In England, Manchester United’s revered ‘Class of 92’ produced such England stars as David Beckham, Paul Scholes and Gary Neville. Elsewhere, Ajax’s ‘Class of 95’ gave the Netherlands world-beaters in the form of Patrick Kluivert, Marc Overmars and Edwin Van Der Saar. FK Gabala aren’t at those glittering heights yet, but their academy is showing signs of heading in the right direction.

Part of the credit must go to former Arsenal and England legend Tony Adams, who arrived as manager in 2010 and stayed on as Sporting Director for many years. In a recent article for Football365, as well as in his autobiography, he describes a club which lacked the basic infrastructure which befits a club on the fringes of European football. Once Heydarov ‘moved him upstairs’, Tony describes how building the youth academy was one of his main priorities, bringing me over from the comforts of Feyenoord to oversee the project. Working alongside Halim Ficici and Nail Karimov, who continue to work for the club, together we managed to build up Azerbaijan’s most successful and state-of-the-art youth academy.

When legendary Manchester United youth coach, Eric Harrison, sat down with Sir Alex Ferguson when he first joined, he pledged to give him quality youth players in return for proper resourcing. Adams adopted a similar approach, bluntly telling Heydarov that without investment in facilities, coaching and infrastructure, he could not bring about change. In Ferguson’s case, the result was the best youth graduates in the world. In Adams’ case, although progress can’t yet be fully evaluated, the results look promising.

The confidence Azerbaijan exudes regarding its football prowess is little short of remarkable, when you consider how relatively short-lived the professional game has been in the country. It bid to host the 2019 U-19 World Cup, it will play host to this season’s UEFA Europa League final – one of the biggest matches on the annual calendar – as well as holding four games at Euro 2020, including a quarter-final tie.

The domestic league goes from strength to strength, with attendances on the rise, facilities improving and a growing number of higher-profile, foreign players choosing to ply their trade in Azerbaijan. Whilst a more diverse pool of players is crucial, the work of clubs like FK Gabala is essential to ensuring talented Azerbaijani youngsters are handed the opportunity to develop and grow. As the country forces it’s way up the European footballing hierarchy, Azerbaijan’s football leaders want to ensure domestic players are leading the way.

The moment when players step on to the hallowed turf at the Baku Olympic Stadium during Euro 2020, they will be watched by millions across Europe and the world, and it will be a significant milestone in the journey of Azerbaijani football. The national side will have their best opportunity in a generation to join the international footballing elite at Europe’s most prestigious tournament. The pioneering work of academies like FK Gabala, under the assured leadership of Halim and Nail, will have made this moment possible. I’m glad I played my small part.