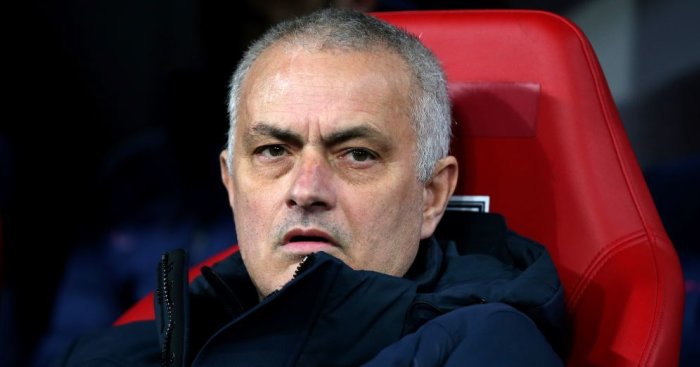 Jose Mourinho has just publicly criticised Tanguy Ndombele following Tottenham’s 1-1 draw at Burnley, claiming the record signing “has had enough time to come to a different level.” Roy Keane and Dion Dublin are ready to give their verdict on Ndombele and Mourinho in the Football365 studio. This is a discussion that never happened, in a studio that doesn’t exist. Gary Lineker presents The Full Time Whistle…

LINEKER: Well, Jose was certainly not holding back there, clearly unhappy with Ndombele’s performance in that first half. Is he maybe being a little bit harsh?

KEANE: Are you joking?

Dublin shifts uncomfortably in his seat.

LINEKER: (smiling) He’s 23 years old, just arrived from France, his first season in the Premier League, he’s not been given a lot of opportunities…

KEANE: And after that performance I think it’s clear why he hasn’t – it was shocking. He’s a professional footballer, Gary.

LINEKER: Yes, but as I said he is a young man and…

KEANE: (interrupts) Young? How old is he? 23? I moved to Manchester United when I was 21 and won the league and FA Cup in my first season. And I can tell you if he’d put in that kind of performance at Manchester United he wouldn’t have played again for Manchester United. I think Jose let him off lightly; I’d have hammered him.

DUBLIN: As in Homes Under the…never mind.

KEANE: And what are his teammates doing? I’d have given him a good slap after five minutes. Where are the leaders on the pitch?

DUBLIN: I disagree with Roy.

Lineker, wide-eyed, looks at Keane then back to Dublin.

DUBLIN: Those players are going to see that interview, see him having a go at one of their teammates, and think ‘he hasn’t got our backs’.

KEANE: It’s not a case of him not having their backs, Dion. The very least he expects is for his players to run around, put a tackle in. Everyone was raving about this boy at Lyon and saying what a good deal it was for Spurs, but we haven’t seen it. It’s like when you buy a house and then find there’s damp hidden behind the wallpaper.

LINEKER: You both played under Sir Alex at United, how would he have reacted to that first-half performance from Ndombele?

KEANE: (frowns) What do you mean we both played at Manchester United?

DUBLIN: I was there when you joined Roy.

Keane looks at Lineker, who nods.

KEANE: He wouldn’t have played like that at Manchester United, there’s no way. We would have let him know that’s not acceptable at Manchester United – I’ve got a few ways of letting a player know when they’re not pulling their weight. And the manager – as much as we didn’t get on – we saw eye-to-eye on a lot of stuff. He wouldn’t have let him anywhere near the pitch. Bit like Dion, I guess.

Dublin smiles and shakes his head.

KEANE: Maybe he should go back to France, I’m sure PSG would take him, what’s another overpaid waste of space to them?

LINEKER: Well, now seems like a good time to cross to Robbie Savage, who was on commentary at Turf Moor.

Savage appears on the screen in the studio.

SAVAGE: Evening fellas. It was more like ‘Turf Bore’ today (laughs at self).

Silence in the studio.

LINEKER: Err, Robbie…you’ve just seen that interview with Mourinho, do you think he was right to come out in public and criticise Ndombele, or do you think maybe he should have saved his thoughts for the dressing-room?

SAVAGE: As you know different managers have different methods of dealing with their players, Gary – Mourinho has never been one to hold back. But I agree with Roy: his teammates have got to take responsibility, they’ve got to get hold of him. That sort of performance would never have happened when I was coming up with the Class of ’92 at United.

SAVAGE: Me, Becks and Scholesy would never have allowed that to happen.

KEANE: Has… has everyone played for Manchester United?

LINEKER: Thanks for that Robbie (video link cuts off). He didn’t play for them Roy, he left for Crewe before he made an appearance.

KEANE: You’d think he was part of the bricks and mortar the way he talks about it.

DUBLIN: (puts arms in the air) Seriously? Bricks and mortar?

LINEKER: Well, as always – Roy, Dion, thanks for your company, but that’s all we’ve time for on Football365. Good evening.

Lineker nods at the camera and smiles until the LIVE light goes off.