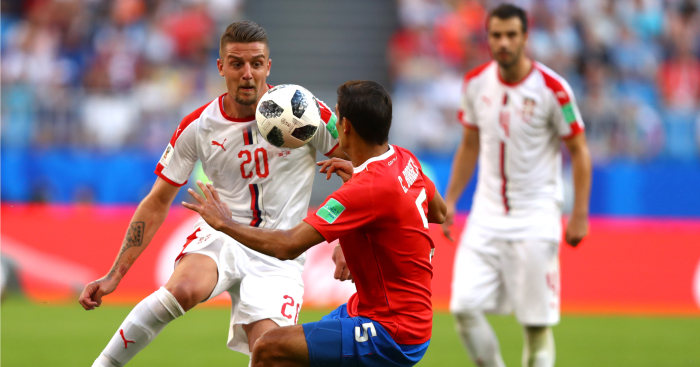 If this is the start of something special in Serbian football, with young, technically gifted players finally let off the leash, there’s nothing quite like the comfort that lies in experience. Mladen Krstajić’s first ever competitive match as a manager was decided by a majestic free-kick from his new captain. Aleksandar Kolarov left English football as a comedic figure, a pillar of banter. He’s become a serious footballer again in Rome.

Of all the European teams in this tournament – and perhaps even all 32 countries – Serbia are the hardest to judge. They have never previously got past the group stage of a major tournament, either as Serbia or Serbia and Montenegro, and hadn’t even qualified for one since 2010. Placed in a group with the teams ranked second and sixth in the world, plus a Costa Rica side that knocked both Italy and England out of the last World Cup, expectations might have been low.

But the opposite is true. Serbia won the Under-19 European Championship in 2013 and the Under-20 World Cup in 2015. As with England, there is real hope that a crop of likeable young players can create a close-knit mood and flourish after years of underachievement.

Unlike England, almost every one of them will prove themselves outside their home country. Lazio’s Sergej Milinković-Savić is the great hope, primed for a move this summer that will make him one of the most expensive players in the game’s history. Andrija Živković has impressed at Benfica and is 21, while Aleksandar Mitrović is still only 23 and helped Fulham into the Premier League last season.

Given the sprinkling of experience around them, Serbia’s squad appears to have a perfect balance. Kolarov is one of five players aged over 30 in the 23-man squad, but Nemanja Matic and Dusan Tadic are both 29 and familiar to Premier League supporters. Branislav Ivanovic and his enormous rump are somehow only 34 years old.

If the squad can be easily split into the experienced and youthful, the same generally applies to their characteristics. In Ivanovic, Kolarov and Matic, Serbia have enough steel to build a significant railroad bridge. Ahead of them are a group of capable technical attacking players who can counter at speed.

If Milinkovic-Savic is the poster boy, it is a fitting role for he strides both camps. At six feet, three inches tall – his father was a professional footballer and his mother a professional basketball player – he has a striking presence. Yet that belies a turn of pace and dribbling ability that you might expect from a slighter, flightier player. As with all physically strong and technically proficient central midfielders (think Mousa Dembele), it is damn hard to shift him off the ball.

Milinkovic-Savic was the game’s best player. This was also his first senior competitive start in international football, so you can see why Lazio were determined to wait until after the World Cup for his asking price to be decided. Add on another £10m, and counting.

On the opposite bench, there is no secret to Costa Rica’s tactics. Óscar Ramírez might as well hand around a pamphlet to assorted media and opposition coaches. Costa Rica conceded two goals in five matches at the 2014 World Cup when reaching the quarter-finals – one was a penalty against Uruguay, and the other a 91st-minute equaliser from Sokratis Papastathopoulos when Greece threw men forward in search of a goal.

Defending is not just part of Costa Rica’s strategy – it is their footballing raison d’etre. The difference between 2014 and 2018 is that Costa Rica’s counter-attacking threat has been lost. Ramirez’s team is worrying one-dimensional, and must now most likely beat one of Brazil or Switzerland to avoid finishing bottom of the group.

Serbian teams of years past would have been thwarted by such defensive solidity, held at arm’s length until they eventually fell out with the opposition, each other and the referee. But Krstajić’s team pushed players forward on the counter, kept their heads and fully merited their victory. If the goal came from a set piece, Mitrovic spurned two clear chances either side of that goal. Other than a first-half Giancarlo González header, Costa Rica barely threatened.

One of the greatest frustrations of Serbian football has been the tendency for politics and bureaucracy to hamper progress, and this World Cup campaign has hardly steered clear of controversy. Slavoljub Muslin, the coach who guided Serbia to the top of a qualifying group containing both Ireland and Wales, was almost immediately sacked. Muslin was criticised for not affording the country’s young talent enough time on the pitch. The underlying accusation was that there is no option: Milinkovic-Savic must start.

But if the pessimist would worry that structural change so close to a major tournament can cause uncertainty and that inexperience equals risk, coach Krstajić is an optimist. “I’m honoured to be on the bench at the World Cup. I’m sleeping calmly, you can be sure,” he says. There was a freshness to Serbia against Costa Rica that has been lacking for too long.

Development need not be measured on the evidence of a single tournament – Krstajić is joined by Gareth Southgate in singing from that hymn sheet. But Serbia finally have a squad in a position to actively progress in a major tournament, rather than passively struggle against elimination. If they can avoid the self-inflicted wounds of tournaments past, a bright new day may break.