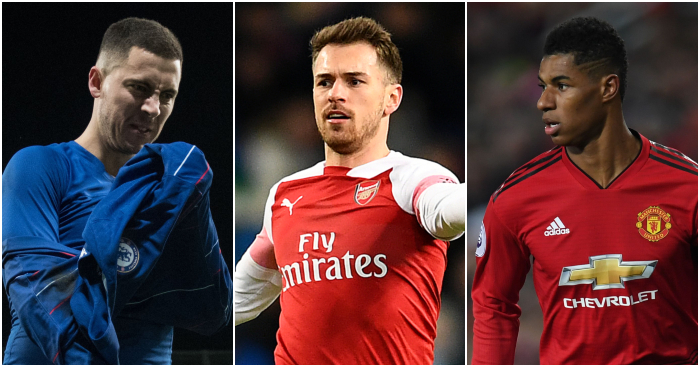 It is hardly what Jean-Marc Bosman had envisaged. If his initial rage against the machine was the first flap of the butterfly’s wings, Aaron Ramsey‘s move to Juventus is the entire swarm migrating to Italy.

The Welshman has embraced the chaos theory that began before he was even born, when Bosman first lobbied to leave Belgian first-division club RFC Liege for French second-tier side Dunkirk in 1990. Those slight tremors barely registered at the time, but soon developed into an earthquake that continues to wreak havoc upon the transfer market.

Sir Alex Ferguson infamously declared that “all hell broke loose” in the aftermath of the 1995 ruling. Bosman would surely agree: he effectively sidelined his entire playing career to fight for a basic human right, with a five-year court battle almost bankrupting him, forcing him to live in his parents’ garage for two years and leading to struggles with depression and alcoholism.

Ramsey, meanwhile, was invited to a party with a bored, long-term partner and has left locking arms with a model club. Where Bosman was offered a new contract at a quarter of his former salary after trying to force a move to a lesser side, one of his many beneficiaries will become the highest-paid British footballer in history for a European giant without ever actually expressing a desire to leave.

It is perhaps the final and most damning of Arsenal chickens to come home to roost before flying the coop. An era marred by mismanagement and characterised by corporate negligence off the pitch has cost the club yet another important player on it. The loss of a 29-year-old Alexis Sanchez last year was at least theoretically offset by the arrival of Henrikh Mkhitaryan; Ramsey at his peak is basically being swapped for Stephan Lichtsteiner at his nadir.

It is a staggering situation, and a decision Ramsey will have pondered for as long as his hometown suggests. Yet it ruthlessly exposes Arsenal’s lack of foresight and planning. Sol Campbell’s point of stressing that he “could have earned more money by going abroad” at his 2001 Highbury unveiling seems prescient. The recent thoughts of the man who signed the centre-half feel prophetic.

“I think in the future you will see that more and more – players going to the end of their contracts,” Arsene Wenger said in July 2017. “Because the transfers become so high even for normal players that nobody will want to pay the amount of money that is demanded.

“I am convinced that in the next 10 years, that will become usual,” added the Frenchman, whose claim that having three players in Sanchez, Mesut Ozil and Alex Oxlade-Chamberlain on expiring contracts was “an ideal situation” rather undermined a typically erudite prediction.

Bosman transfers might never become the norm that Wenger expects, but Ramsey could be the new trendsetter. In the 24 years since that ruling was passed surprisingly few players have utilised it at the absolute peak of their careers: Arsenal plucked Cesc Fabregas from Barcelona when he was 16; Kingsley Coman, Paul Pogba, Andrea Pirlo and Dani Alves were 18, 19, 32 and 33 respectively when they joined Juventus; Gianluca Vialli and Ruud Gullit were 31 and 32 when they made Chelsea their final football forays; Henrik Larsson was 33 when he moved to Barcelona; and Gary McAllister’s Liverpool salvo came when he was 35.

Most successful free agents have either been young or old enough for the comparatively low amounts of money involved to be worth the gamble. After much of Ajax’s 1995 Champions League-winning squad utilised the Bosman rule in its infancy, there have been scant exceptions to prove the rule that players in their prime move for high fees. Robert Lewandowski (25 at Bayern), Campbell (26 at Arsenal), Steve McManaman (27 at Liverpool), Michael Ballack (29 at Chelsea) and now Ramsey are rebels with a lucrative cause.

The irony will not be lost on Bosman, who was 25 and at his peak when he first sought to leave Belgium, and 31 and practically retired when he earned a right he could never truly enjoy.

But the rise of player power and agent influence suggests more will follow Ramsey’s gilded suit. Liverpool and Tottenham are rare examples of clubs who have largely maintained control amid the chaos, protecting themselves through squad-wide contract extensions. But many others are facing the prospect of players honouring their deals then moving elsewhere for a better wage and signing-on bonus, with new suitors unencumbered by transfer fees. Clubs must decide at least 12 months before whether they wish to stick or twist, either cashing in when they can or losing valuable assets for nothing.

Ramsey’s departure will be a warning that Chelsea must heed over Eden Hazard, Tottenham have to hear when it comes to Christian Eriksen and Manchester United ought to keep in mind with Marcus Rashford and David de Gea. Each of those deals may have 18 months remaining, but Arsenal were ‘planning swift negotiations’ with Ramsey and eight others a year and a half ago. As things stand, Nacho Monreal will be the last man standing of those nine players come August.

Real Madrid, Barcelona, PSG, Juventus and indeed their own domestic rivals will be watching on, happy to wait for the first chance to offer vastly inflated wages without having to worry about transfer fees.

Resting on laurels is no longer an option, and many of the Premier League’s finest talents are now approaching the expiration of their contracts safe in the knowledge that even the idea of being a free agent is less like a bargaining chip and more like owning the entire casino.

“They were caged animals; I freed them,” Bosman reflected four years ago on how he changed the entire transfer landscape for players at the start and end of their careers. Ramsey might well be leading the new wave of nomads in their prime.