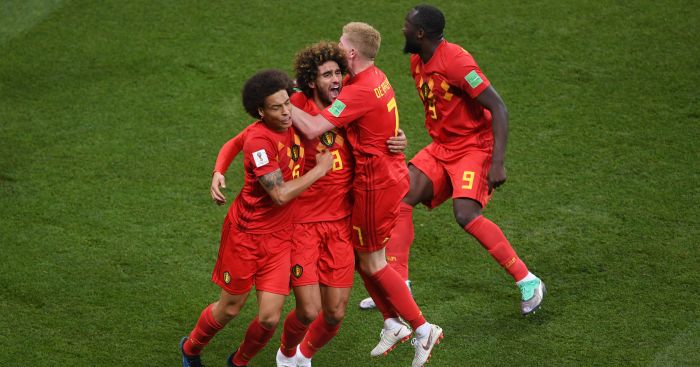 Fortune favours the brave, but it can also kick them square in the face. Japan, buoyant and then broken and then somehow buoyant once again, won a corner in the final minute of added time. Of course they should have taken it slowly, waited for the final whistle and regrouped in extra-time. Four, five, six even seven blue shirts jogged forward and into the penalty area. They wanted their winner. Eight seconds later, they had lost.

The counter-attack was supreme, started by a quick roll of the ball from Thibaut Courtois to Kevin de Bruyne, former Genk teammates reigniting that old spark. De Bruyne streamed forward, aware that each fraction of a second wasted would allow defenders to recover their ground. His pass to Thomas Meunier was played in stride and arrived in stride, because that is what De Bruyne does.

Meunier’s ball was simple, played into the feet of Romelu Lukaku somewhere around the penalty spot. Belgium’s striker, their record goalscorer, had his moment. Lukaku had flashed a header wide earlier in the half, a wretched miss. Redemption?

Redemption, but not as we expected. Rather than collecting the ball, spinning and shooting, Lukaku allowed Meunier’s pass to roll through his legs. Somehow, in the manic pulse of those final few seconds, he had the wherewithal to realise that Nacer Chadli had made ground behind him and was the better option.

The best touch of the match wasn’t even a touch at all, but a non-touch. The vision, clarity of mind and selflessness from Lukaku, all deserve their own assist. Chadli slipped the ball passed the hapless Eiji Kawashima, and a nation rejoiced in its own resurrection.

Watch Lukaku's run. Drags the defender inside to create space for Meunier and then dummies it brilliantly for Chadli. Brilliant work. pic.twitter.com/RKseQLdX7q

The only thing this magnificent, rollicking World Cup had lacked was an extraordinary comeback, but this is not a tournament to leave you wanting for long.

Before Monday evening, a team had taken a two-goal lead on 19 occasions; all 19 had ended in victory. Before Monday evening, the last time a team came from 2-0 down to win a World Cup knockout game was Germany against England in 1970. Belgium, stunned by a five-minute Japanese salvo in which they scored twice, dug themselves out of the deepest hole.

If the bigger picture was wonderful, disorganised chaos, the mechanics of this absorbing night were just as fun. Genki Haraguchi arrowed the ball across Thibaut Courtois before Takashi Inui did the same from even further out. Karma punished Courtois for his boast that he would have caught Adnan Janzaj’s shot against England; pride comes before a dive. Jan Vertonghen scored the longest-range header in recorded World Cup history (at least since 1966). The only predictable moment was Fellaini’s stooping equaliser, super sub for country and club.

Sunday had brought us four goals in 240 minutes as we briefly returned to the usual plane of tense, cagey knockout football. Monday evening brought us four goals in 26 second-half minutes as the 2018 World Cup again lurched to the point where sublime meets ridiculous. The fifth in stoppage time was the umpteenth occasion in the last fortnight that you’ve caught yourself staring into the television in captivated wonder.

Japan coach Akira Nishino admitted after his side played out the last ten minutes of a 1-0 defeat to Poland that he had no plan for that eventuality. His grand idea was to cross fingers and hope for the best. But Nishino made up for that temporary vacuum against Belgium. He instructed his players to press high and counter-attack at speed, believing his team could overload on the break if they were defensively resilient. It worked beautifully, Belgium left helpless against the sheer power of belief. This was Cameroon vs England at Italia ‘90, remixed for the present day.

Belgium will need to play far better than this to trouble Brazil, but the focus deserves to be on the subsequent climb rather than fall. If there are doubts about the squad’s trust in Roberto Martinez, this was proof that there is still a shared desire to right the wrongs of Euro 2016.

Watching Belgium play below their best can be a frustrating pursuit. Almost two years into Martinez’s reign, this is still a team of component parts too often existing in inglorious isolation. Eden Hazard, De Bruyne, Dries Mertens and Lukaku hold the ball up, make passes, complete dribbles and take shots, but it all seems to happen through some force of individual will, rather than sweeping team play.

Yet that is what makes their comeback so baffling. When pressure was low, so too was cohesion and therefore performance level. When concern became full-blown crisis, and heads could have been lost, Belgium suddenly clicked. They saved their best passage of cohesive offensive play for their final attack of the match.

Dwelling for too long on the ‘why’ has become a foolish pursuit during this World Cup. Major tournaments usually tighten up? We’re currently averaging 3.5 goals per knockout match. Major footballing nations will dominate? Not a bit of it. Roberto Martinez can’t transform a lost cause? Watch and wait.

This World Cup has continuously confounded expectation, inexplicable and illogical. Both are intended as compliments, for nothing is more sure: ignorance is bliss.