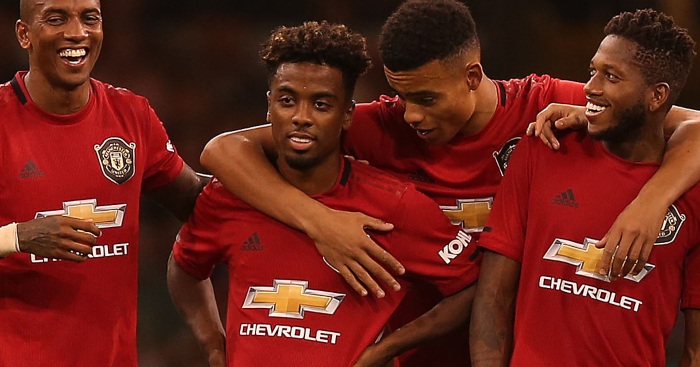 While scores of Manchester United fans across the globe on Tuesday night were eagerly awaiting the latest update on the club’s attempt to sign Christian Eriksen, 435 hardy souls traipsed to Rotherham to see why they might not have to.

It was reported in the afternoon that the Red Devils were pushing hard to recruit the Tottenham playmaker having walked away from negotiations with Paulo Dybala for a variety of good reasons. By the evening, word had probably reached Ole Gunnar Solskjaer that Eriksen’s heart might not be in it, as it would if Real Madrid were the ones calling. At the same time, in South Yorkshire, Angel Gomes was demonstrating that, should United fail to land a playmaker before tomorrow’s deadline, then it won’t be the end of the world. Actually, it might be for the best.

Gomes was part of United’s Under-21 side which played their first game in the EFL Trophy – a North Group H encounter before 3105 supporters in a sparse New York Stadium where Neil Wood’s team triumphed 2-0 over a senior Rotherham side well fancied to make a swift return to the Championship this term.

Alongside Gomes, captain for the night, were James Garner and Tatith Chong, all of whom travelled to Australia and the Far East with Solskjaer’s first team this summer. A fourth touring youngster, Mason Greenwood, was absent from the squad in Rotherham, reinforcing the suspicion that the precociously-talented 17-year-old will be involved with Solskjaer’s first team when the Premier League campaign kicks off on Sunday.

If the other trio had been disheartened by their summons to Leasing.com Trophy duty, it didn’t show. All three recognised this as another opportunity to show that senior opposition holds no more fear than their more familiar foes in Under-23 football.

Against battle-hardened, experienced Football League campaigners, the 18-year-old pulled the strings, took the knocks and drove United forward from every conceivable starting position. From the first whistle, Gomes was frequently finding pockets of space but the imposing shadows of Richard Wood, Jake Cooper and Jamie Lindsay didn’t stop him demanding it whenever room was tight.

Gomes was most dangerous when receiving the ball under pressure – in any area. Wood’s side have clearly been schooled and instructed to play out from the back and Gomes was the recipient of numerous passes from keeper Matej Kovar, who looks more comfortable in possession than some of Solskjaer’s senior centre-backs. When Rotherham pressed Gomes, so often all it took was one shimmy or touch and the first man was beaten. When Wood and his Millers mates stood off Gomes, he was able to turn and penetrate with pass or dribble.

A closer look at the rapid move which almost led to a third #MUFC goal! pic.twitter.com/jldqMKDj4L

Rotherham captain Wood could have been forgiven for feeling confident in the tunnel at 6:55pm when he looked down upon his United counterpart. Gomes is a full foot shorter than Wood and the England Under-19 international would have to peer up even at Ryan Fraser, the Premier League’s shortest player who stands two centimetres taller.

Perhaps Gomes will have a spurt – but it doesn’t matter. Fraser has shown that size doesn’t matter in Premier League combat and Gomes certainly has that low centre of gravity that makes the likes of Eden Hazard and Raheem Sterling so hard to pin down.

There is plenty of evidence beyond this single performance that Gomes is ready for first-team football and, most importantly, he needs first-team football. Much like Garner and Chong, Under-23 Division Two football will do little for him this season. Nor will a few appearances at Lincoln and Doncaster in the EFL Trophy in the coming months. United have to find a way to get these boys in among the muck and bullets of senior matches.

That could be via loan periods and some of United’s talented youngsters would certainly benefit from such arrangements. But Gomes, Garner and Greenwood are capable of learning on the job in Solskjaer’s senior squad.

The United boss has made a big deal of promoting the youth as part of the club’s heritage that he plans to restore. Last season it was easy: offering the odd late substitute appearance, almost as a token gesture, provided some bright spots on the bleak overall landscape of United’s season. Creating a pathway for these youngsters to become first-team regulars is a far more complex task, especially while fans are clamouring for immediate and tangible improvement, powered by big-name replacements for last season’s flops. It was not a concern for Solskjaer’s predecessors because the supply of talent had all-but dried up. Marcus Rashford came through but his emergence was almost an accident. Now, the academy has got the stream flowing once more and Solskjaer needs to ensure there is no logjam.

Should Eriksen, Dybala or any other playmaker turn up at Old Trafford tomorrow, it presents Gomes with yet another obstacle to overcome. Including Gomes and Greenwood among Solskjaer’s options for the three behind a central striker – presuming that will be his preferred formation – United are pretty flush. Daniel James is fresh on the scene; more is expected of Jesse Lingard and Anthony Martial; Juan Mata remains useful; and, you never know, Alexis Sanchez might surprise us all by offering something other than apathy and disgruntlement.

Eriksen would improve United, of course. But at what cost beyond the £60million it would take to tempt Daniel Levy into strengthening a direct rival? There have already been whispers that Gomes could look beyond the borders for first-team football, in similar fashion to Jadon Sancho, with PSG and Barca both said to be willing to give him a platform if United aren’t.

With a year left on his contract, now is the time for Solskjaer to demonstrate his faith in Gomes. That can only happen amid a longer-term view beyond just the transfer deadline. Yes, United need another midfielder. But the void exists deeper than where Gomes could thrive.