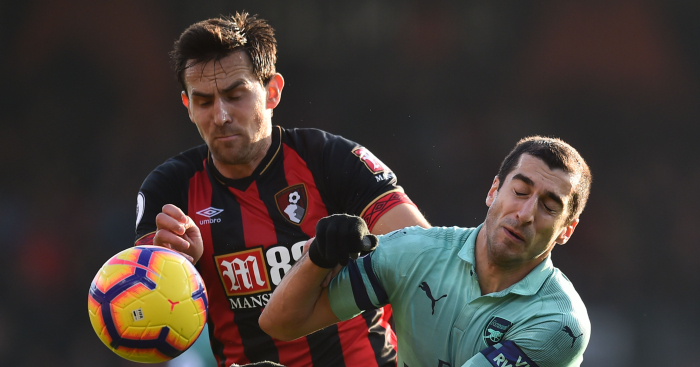 If Henrikh Mkhitaryan is right that the “culture” has changed at Arsenal, he had better start putting together a contingency plan soon. As gladly as Arsene Wenger suffered fools in north London, his successor has shown scant regard to reputation. No place is safe under Unai Emery.

“Now people are believing more in ourselves because we are playing a bit differently,” Mkhitaryan said last month. “We are giving them confidence and playing the way they want us to play. We are scoring goals, winning games and it is the best feeling for the supporters.”

We. Us. Ourselves. It was the end-of-year speech from an unpopular boss trying to take credit for his staff’s work, the paint salesman patting himself on the back for playing a part in Pablo Picasso’s latest masterpiece. Arsenal’s 17-game unbeaten run has undeniably been a team effort, but Mkhitaryan has been far more hindrance than help.

As the Gunners edged past Bournemouth on Sunday, it was difficult not to wonder what he thought of his contribution to the cause. Did ‘we’ earn those three points? Was it a good result for ‘us’? Did ‘we’ give a good account of ‘ourselves’?

There is indeed no I in team, but neither is there room for passengers at Arsenal any longer. Yet at Bournemouth, Mkhitaryan forced himself into the car, struggled with his seat belt and dozed off for the entire journey as his teammates safely navigated these potentially treacherous roads. Fittingly enough, Mkhitaryan played like he had only woken up a minute or so prior to kick-off.

The Armenian started as he meant to go on, misplacing a pass within the opening 15 seconds to give Josh King a run at the Arsenal defence. From there, it was a lesson in how to be as ineffective as possible. Mkhitaryan struggled to properly weight a pass all afternoon, offering almost no assistance to a team struggling to find a foothold.

Even when Arsenal did enjoy periods of dominance, Mkhitaryan’s fecklessness was only highlighted more. He had seven shots, only one of which was on target. He somehow managed to block another himself, capitalising on Pierre-Emerick Aubameyang’s excellent break with a terrible first touch before hitting the ball against his standing foot.

Mkhitaryan resembled the brother whose older sibling had been forced to bring him along for a kickabout. He could not cope with the pace of the game, nor the demands placed on him by Arsenal’s formational switch. He has now failed to score or assist a goal in 16 of his last 20 matches, and one goal and no assists in his last nine games at club level. For a side who have not lost since August, such ineptitude is genuinely quite impressive.

There was one flash of light to pierce the mundane, as Mkhitaryan robbed Jefferson Lerma to create a second-half chance for Aubameyang. But it was difficult to make out the silver lining, so dark was the cloud that came immediately before and after it.

That Arsenal were able to accommodate such a poor performance is testament to their character and resilience. Lerma’s opening own goal was fortuitous, while King’s equaliser was exquisite. Arsenal have still not led a Premier League game at half-time this season, but they battled to win all three points by full-time.

It might have been so much easier had they not had to carry a dead weight around all game. Arsenal players might have been able to coast under previous management, but inadequacy will only be tolerated for so long now. This Mkhi mouse will surely find himself trapped out of the side soon.