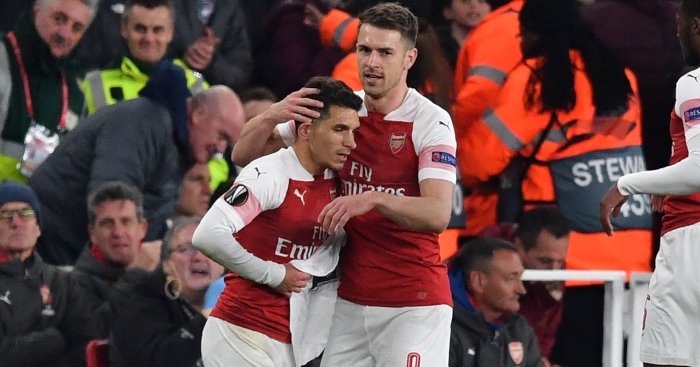 How typical of Arsenal to follow one of their worst performances of the season – away at Everton – with one of their most complete displays to outclass Italy’s second-best side. And, this really is classic Arsenal, Unai Emery appears to have found a winning formula just too late to yield the potential rewards.

Against Napoli in the tie of the Europa League quarter-finals, the third-favourites opened up a two-goal advantage over the second-favourites courtesy of first-half goals from Aaron Ramsey and Lucas Torreira. It was the first time these two goalscorers have been paired together in the base of Arsenal’s midfield and Emery was treated to a taste of what could have been had the Gunners felt able to compete in the race to sign their own player.

At least Ramsey seems determined to finish his Arsenal career with a flourish and when he goes to Juventus in the summer to play alongside Cristiano Ronaldo, the Welshman may well depart with a tinge of regret that he did not get to team up more often with Torreira. Although they have been named together in the same XI on eight previous occasions this term, the absence of Granit Zhaka and the visit of Napoli allowed Emery to field Ramsey and Torreira in a partnership for the first time; the combination made bitter-sweet viewing for Arsenal fans.

Ramsey and Torreira set the tone for a performance only the most optimistic of Arsenal fans might have hoped for, especially in the wake of their tame surrender at Goodison Park on Sunday. But, same old Arsenal, this is a side which enjoys its home comforts and Napoli struggled to live with the Gunners amid a frenetic start at the Emirates.

Both goals came from pressing Napoli either side of the halfway line and breaking at break-neck speed once possession was won. Firstly, Ramsey left Torreira to guard the back four, bouncing the ball back to Mesut Ozil before hurtling into the box, where the midfielder was able to sweep home after Ainsley Maitland-Niles’ composed turn and touch before a quarter of an hour had passed.

Ten minutes later, it was Torreira’s turn to go. The Uruguayan was given a sniff of possession inside the Napoli half which he pounced, while Aubameyang and Lacazette parted ahead of him. Rather than lay off a simple pass to either striker, however, Torreira chopped the ball from his right to left foot, took out Fabian Ruiz and opened up a 20-yard shooting opportunity. It was hardly the cleanest strike and one which may have rolled the wrong side of the post from an Arsenal perspective, but Kalidou Koulibaly – who had already been forced into a couple of last-ditch blocks – failed to form an impenetrable barrier on this occasion, instead deflecting the ball beyond the helpless Alex Meret.

For the entirety of their shift together, Ramsey and Torreira worked in tandem to supplement a forward line featuring all three of Ozil, Lacazette and Aubameyang. Rarely did both go, and when the ball was surrendered – Napoli had 58 per cent of the possession – both were able to retreat to provide the kind of shield Arsenal’s rearguard has so often lacked.

8 – Since the start of last season, Aaron Ramsey has been directly involved in eight goals in the Europa League (6 goals, 2 assists), more than any other Arsenal player. Swansong. #ARSNAP #UEL pic.twitter.com/EuiZkpnUQi

Only just before the break and occasionally in the second half did Napoli cause Emery’s defence concern, but it was great enough for the Gunners to feel relieved and somewhat fortunate to be taking a clean sheet to Naples next week. Rarely did the visitors play through Ramsey or Torreira but because the midfield pair pressed high, Arsenal’s back three had to no choice but to squeeze up too, leaving space for Napoli to take the direct route. Chipped passes in behind Nacho Monreal led to glorious opportunities for Lorenzo Insigne and Piotr Zielinski, both of which were squandered.

On this evidence, you might be forgiven for forgetting that Carlo Ancelotti’s side lost only one game – a narrow defeat at Liverpool – in a desperately difficult Champions League group also featuring PSG. The Italians, who sit snugly in second place in Serie A, were very much second best on another miserable trip to London and while a two-goal deficit flatters Napoli, that will be the only regret for Unai Emery.

Ancelotti admitted it was “a very bad” start for his side but the three-time Champions League winner took heart from the fact that Napoli remain in the tie when potentially Arsenal could have been out of sight. Before Thursday night, Napoli have not faced as many efforts on their goal in the first half of any other game this season, while Ramsey and Aubameyang missed glorious opportunities in the second period to establish a lead the Gunners could not blow, even with their away form.

No side in the Premier League has demonstrated a greater contrast between their home and away form and Emery must now decide on how to approach next week’s trip to Stadio San Paolo. Xhaka will probably return alongside Torreira and Arsenal may well resist the temptation to press in the way which earned them their advantage. But Emery must surely know by now that he cannot rely on this defence to sit on any lead. If the manager is brave, he may well find attack is his best form of defence. And Arsenal really should make the most of Torreira and Ramsey together while they still can.