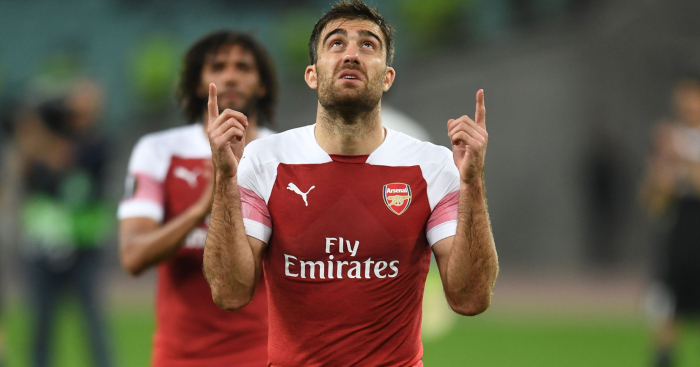 You wouldn’t blame Unai Emery if the Arsenal manager carried a grievance over the start he was handed by the Premier League fixture computer. So it would be understandable if he felt that the Gunners had been entitled to ride some luck in the weeks since.

Having been pointless after two games and the toughest of starts against Manchester City and Chelsea, Emery’s men have embarked upon a winning streak which was extended to eight games by a 3-0 victory over Qarabag. Such a positive run, fuelled by 22 goals scored at a rate of 2.75 per match, might suggest that the new manager has already found his winning formula.

Emery has tinkered and tweaked with each passing match, mostly with the midfield and attack where his experiments have yielded some positive results. Alexandre Lacazette and Pierre-Emerick Aubameyang are scoring and creating, though the latter might not be overjoyed at his wider role in the frontline, while Emery is delighted to have Danny Welbeck breathing down the necks of his first-choice strikers.

Now Emery has to switch his attention to his defence, which prior to the trip to Baku, had remained consistent in formation, if not form. The Gunners have made only two changes to their back four throughout seven Premier League matches with Shkodran Mustafi and Hector Bellerin having played every minute, while Nacho Monreal started the opening game on the bench and new signing Sokratis Papastathopoulos missed the weekend’s win over Watford.

Despite that consistency of selection and their current winning streak – Arsenal’s best for eight years – their defensive record remains a source of concern for Emery. The Gunners sit in fifth place just four points off the leaders, but all four teams above them as well as Wolves, Watford and Crystal Palace have all conceded fewer goals. And the stats suggest it could have been worse for Emery.

Arsenal’s goal has seen 96 shots attempted upon it – only six teams have allowed more – while 40 of those have found the target. Fifteen of their Premier League rivals have shielded their goal more effectively.

So as well as taking the opportunity to freshen up the personnel in his defence as part of nine changes to his XI, Emery also took a look at a different system in an effort to better protect new goalkeeper Bernd Leno. He won’t have liked a great deal what he saw.

Though Qarabag attempted 12 shots of which four were on target, a better opponent than Azerbaijani champions would have made far more from other promising positions they were allowed to wander into. When their touch was up to standard, fortunately for Arsenal, Leno enjoyed a fine game in his third start for the club. The German keeper, who will get a run in the Premier League now owing to Petr Cech’s injury, made a couple of saves in either half, with two low blocks in the first-half especially impressive. Leno will take a great deal of confidence from his own performance, if not that of those around him.

18 – Sokratis Papastathopoulos is the 18th different player to score for Arsenal in the Europa League since the start of last season, seven more than any other team (excl. own-goals). Opener. pic.twitter.com/VtgImFZapd

Sokratis was again Arsenal’s leading light in a defence that concerned Emery enough to revert to a back four. In neither system did Sead Kolasinac thrive and though the Bosnian was understandably rusty after a two-month absence, it does not seem that his positioning or awareness has improved from a period of watching from the sidelines. Mohamed Elneny, who has not played in the Premier League this season and did not make the bench last weekend, was brought in from the cold to screen the back three but the midfielder did little to improve his prospects of greater involvement.

Aside from the scoreline and Leno’s performance, there were other positives for the Gunners. Sokratis, Emile Smith Rowe and Matteo Guendouzi all notched their first goals for the club, with the young duo’s rate of progress offering perhaps an unexpected bonus for the new manager. Alex Iwobi is also continuing to grow in confidence under the new manager and the Nigeria attacker could be the one to benefit most from Aaron Ramsey’s current contract predicament.

But Emery will spend much of the five-and-a-half-hour flight back to London pondering how best to plug the holes that still exist in his defence. The new manager has a month during which Arsenal face Fulham, Leicester, Sporting Lisbon, Crystal Palace and Blackpool to make the necessary improvements before Liverpool provide the test on November 3 to measure what progress has been made from that trickiest of starts.