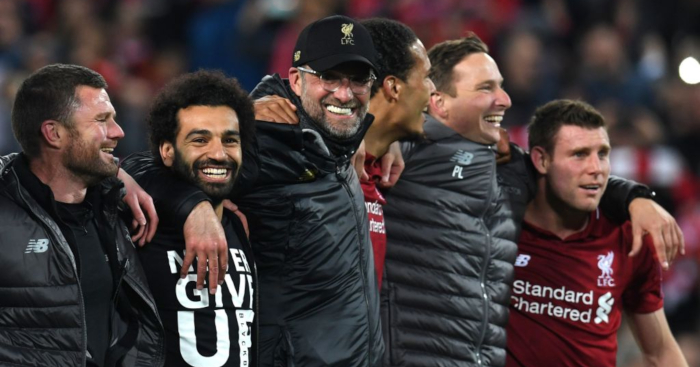 They were told it would require a ‘miracle’. That no team had ever recovered from a three-goal first-leg deficit in a European Cup semi-final to advance. That this was destined to be one of the greatest, most bittersweet empty-handed seasons in history.

They were told that Roberto Firmino was injured and Mohamed Salah was unavailable. That Barcelona had conceded three times or more in a game just once all season, and even then only lost 4-3. That beating this side was possible, but simultaneously quashing Lionel Messi to the point of silence was not.

There was a reason we noted Barca’s woeful recent away record in Champions League knockout ties, but also a reason that was mocked and derided as wishful thinking, as forlornly hoping for pigs to fly over hell as it froze over. Liverpool had overcome the odds and scaled the most daunting mountains before, but this was too outlandish a plot, too implausible an outcome. It simply made no sense.

Credit to @F365 who nailed it pic.twitter.com/xim5MdfZ7o

Football often doesn’t. Liverpool started the second leg of a Champions League semi-final at three goals down against a team containing perhaps the greatest player in the history of the sport, having seen their Premier League title hopes evaporate 24 hours prior. While their opponents rested their entire starting XI at the weekend, the hosts fully exerted themselves until the final whistle against Newcastle four days before. If the scoreline was not enough of an advantage, Barca held superiority in terms of fitness levels and the availability of their strongest warriors.

Messi was flanked by Luis Suarez and Philippe Coutinho, supported by Ivan Rakitic, Arturo Vidal and Sergio Busquets. Divock Origi started his sixth game of the season and ended it duly accepting Anfield’s adoration. Xherdan Shaqiri started his first Champions League match since October and ended it with a wonderful tie-levelling assist. James Milner started the game as a battle-hardened, unflappable central midfielder, and ended it as a sobbing, sodding left-back.

It was precisely the sort of game, the kind of occasion, the type of atmosphere, that could reduce a 17-year veteran, a man who has been playing for more than half of his life and has experienced the highest highs and the lowest lows, to tears. It was difficult to contemplate as a viewer; to comprehend it as a player was simply overwhelming.

Even when Liverpool opened the scoring so soon through Origi, progression was a speck in the distance. Alisson was forced into two good saves shortly after as both sides succumbed to the sheer magnitude of the game. Possession traded hands more times than either manager would care to remember.

By half-time, the job was not even half done. Liverpool led, but only by a single goal. If Shaqiri’s passes had been a little sharper; if Milner’s feet were a little faster; if Vidal hadn’t been such man possessed, the gap might have been more pronounced. The Reds had balanced the desperate need to attack with the requirement to defend admirably, yet Barca were still in control.

At least they were in theory. Roma led 1-0 at half-time of their Champions League quarter-final second-leg against the Spaniards last season, with Edin Dzeko opening the scoring after six minutes; Liverpool were made to wait seven before Origi struck. The finish line was still within Barca’s reach on both occasions.

The Reds could only hope history would repeat itself. “When you suffer this kind of defeat, the analysis can be straightforward or difficult,” Ernesto Valverde said after that Roma collapse. “They pressed aggressively and we didn’t deal with that very well. It’s been a bad day because we haven’t been capable of dealing with the situations they’ve put us in. They stopped us playing our own way.”

It took until the 58th minute for Roma to double their lead then; it took until the 56th minute for the Reds to treble their half-time advantage here. And Luis Suarez can claim his first assist in a Liverpool shirt since 2014: his pantomime villain act was the perfect foil for Anfield to bounce off, he failed to create a single chance all game and the injury he inflicted upon Andy Robertson was his pièce de résistance.

The left-back did not emerge for the second half after falling victim to the Uruguayan’s questionable sprinting technique. His replacement was a stroke of genius from Jurgen Klopp, as Georginio Wijnaldum came on and Milner moved into defence. Within just over ten minutes, Liverpool were unfathomably level.

Thirty-one seconds separated his two strikes, the second of which came just four minutes and 40 seconds after Suarez missed the most presentable of chances to surely end the tie as a contest. Ian Rush is now the only player to score more European Cup semi-final goals for the Reds than Wijnaldum, and Klopp is now the only manager to ever guide an English club to three finals in his first three seasons of European competition.

It seemed curious that the game the German chose to draw pre-match inspiration from actually ended in glorious failure. His Dortmund side almost overturned a 3-0 deficit against Spanish opposition five years ago but could not clear the final hurdle against Real Madrid.

Liverpool did so in the most brilliant way on Tuesday evening. Trent Alexander-Arnold, who had carved the second goal out of persistent, hard-working, stony excellence, laid on the fourth with some remarkable clarity and speed of thought to find the sublime Origi. Iago Aspas can no longer lay claim to the most famous corner ever taken at Anfield.

Therein lies the genius of Klopp: his methods are unorthodox and his messages unconventional, but the results are so often inarguable. Many will question his lack of trophies since 2014 and his record in finals, but he will get another opportunity to rectify those laughable issues emphatically next month.

It really should not be possible. At the start of last season, one solitary member of Liverpool’s first-team squad had ever featured in a Champions League semi-final. And Joel Matip, handyman of that 2011 Schalke side, was quite unthinkably deputy to Dejan Lovren.

Only six other players had even featured in the knockout stages, with Daniel Sturridge and Philippe Coutinho’s respective eight and ten-minute cameos the only quarter-final appearances. Yet the addition of final-four frequenters Alisson and Fabinho has helped push this side towards an unthinkable glory. Consecutive Champions League finals is an absolutely astounding achievement from an utterly astonishing side.

Sunday is likely to bring a fair amount of disappointment, but the dynamic of the Premier League’s final day has shifted completely. The home game with Wolves might previously have been a dead-rubber, one final chance to celebrate the ridiculousness of their overall campaign and to regret what might have been. But Liverpool can now play with the freedom of knowing that their dream does not end there.

This remarkable journey will not culminate on Merseyside, but in Madrid. After the miracle of this night and of this season, they deserve nothing less.