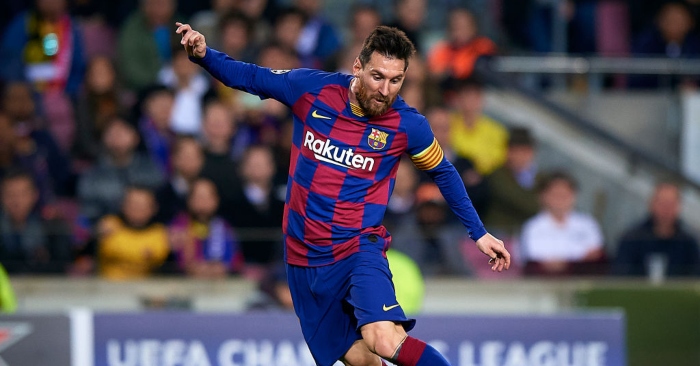 So, the derby of curious dysfunction in Camp Nou. What would ordinarily be a gleaming European fixture promised a more voyeuristic spectacle on Wednesday night. These are not teams in good health and this was a chance to watch them expose each other’s flaws.

That might sound like a strange description of Barcelona, who are top of La Liga and have lost just three times all season, but Ernesto Valverde’s side are an ideology mess. They have an over-reliance in all the obvious places and though they’re still winning, it’s not with any coherence or conviction.

Or confidence. Or style recognisable as their own.

It took less than a minute for the first ocasió de perill against Borussia Dortmund. Sergio Busquets’ prodded pass was followed by a looser, even more uncertain touch from Ivan Rakitic and Dortmund broke, three on three, into an entire half of space, before Marc-Andre ter Stegen denied them the lead with a fine save.

It was typical of what Barca have been this season, but still no less shocking. It’s so incongruous. It’s not so long ago that visiting teams used to curl up into a ball at that ground, hoping against expectation to escape with their dignity. That was true even in the Champions League, even when the proper stars came to visit. So to see the home side carry that fear themselves and almost serve up the game’s first goal through self-sabotage was just bizarre.

Borussia Dortmund don’t have it much better at the moment, though. Their legs still haven’t stiffened up after taking that dreadful pummelling from Bayern Munich at the beginning of the month. Unfortunately, part of that defeat’s sub-text remains very relevant indeed: Jadon Sancho is still seething at having been substituted in the first half – scapegoated as he saw it – and Dortmund’s most valuable and exciting player is heading for the exit.

Squad disharmony isn’t completely alien to their fans; Pierre-Emerick Aubameyang had a mighty sulk before leaving for Arsenal, but – again, like Barcelona – the mood around Dortmund seems at odds with what their culture has been for so long. In recent years, Dortmund has become one of those places where things just work: the scouting, the transfers, the team and, Peter Bosz aside, the managerial appointments.

Less so at the moment. In fact, Lucien Favre might not have even made the flight had his players not dug their way out of a 3-0 hole at home to Paderborn last weekend. It was descriptive of his team’s state that, even when presented with those early chances and with Barcelona’s knees knocking, they couldn’t hand the initiative back quickly enough.

And Barcelona did capitalise, with one of those slick Leo Messi-Luis Suarez combinations which belonged to a different time. One-nil, then two a couple of minutes later. Matts Hummels shovelled the ball to nobody, Suarez and Messi came flying back towards him, and the latter floated away and round the back of the defence, dancing through to finish the game before half-time.

So those bits were normal, but everything else played out in a completely different key.

Sid Lowe wrote an excellent article about this for The Guardian earlier in the week, describing Barcelona’s various ailments and neuroses. What stood out most, however, was this quote, from Antoine Griezmann.

“I try to read my teammates’ movements, but it’s difficult. It’s all new for me. I still don’t understand the runs of Suárez, Messi or Dembélé. I still lack the confidence to pass or shoot, but it will come.”

It’s an understandable issue – he’s only been at the club for a few months. But it’s a comment that resonates because it could have been spoken by so many other players. In fact, other than when the ball is being spirited between Messi and Suarez, Barcelona’s football is full of intermittent pauses and inaccuracies. It doesn’t make them a bad team, but it is suggestive of a lack of harmony and understanding.

These are subtle differences rather than major flaws, but they were there against Dortmund. In passes which went behind players, rather than to their feet and into space. Also in the extra touches and slow pivots with the ball.

They didn’t even play badly. Actually, at 2-0 and with Dortmund finished, the passes did start to zip around and the third goal, which Griezmann scored after a fine move, was one of Wednesday night’s best. But it still came with an asterisk, because it depended on Messi at its critical stage and without his beguiling little touches and final, lethal pass, it would have developed in a way that even that fragile Dortmund defence could probably have contained.

That’s broadly fine, because who doesn’t want to watch him do those things? But at some point this relationship changed. Messi has always been brilliant and he has always stood out within this side, regardless of who else was in it. But while those teams benefitted enormously from what he was, they never seemed entirely beholden to those special abilities. Barcelona didn’t begin and end with Messi in the way that they do now.

And they really do. Totally and completely. If a Barcelona move doesn’t draw on his influence directly, then it lacks speed, craft and precision. When he injects himself they look vaguely like themselves again. When he doesn’t, they look like a group of players with no chemistry. That’s the problem; that’s what’s alien. They look so loose and frayed at the seams. The players are good enough, but they’re not bound together in nearly the same way or, seemingly, by the same ideals.

Pining for the past is tedious. But the aim isn’t to mourn the loss of Xavi and Iniesta, Dani Alves and the rest, or to mither on pointlessly about how peerless that group was. Instead, it’s to question how Barcelona lost all the ideological warmth which used to fertilise their talent. It’s to wonder where their ideas are and to query whether they really extend that far beyond Messi.

How is he having to perform this role at this stage of his career?

He should be playing almost at walking pace now, with the young and vibrant making their knifing runs around and ahead of him. What should be in evidence now are Barcelona’s attempts to preserve him for as long as possible. They should be saving his legs, keeping him out of tackles and drawing down on his resources of class as little as possible. At 32, his dynamic moments should be a nostalgic treat for the Camp Nou crowd, not a staple of every game out of necessity.

People who pay proper, week-to-week attention to the club will know better. For those of us who just occasionally glance at it, however, this situation seems almost sad. Like watching an ageing musician being pushed out onto the stage, night after night, and being asked to sweat through a two-hour set list that never changes. On Wednesday night, that was good enough. He cranked out a few decent solos and hit enough of the high notes to the keep the attention away from the rest of the band. Everyone went home happy enough, they saw what they wanted to see.

So, yes, Dortmund were beaten and Barcelona have now qualified for the knockout stages. That’s a nice, comforting headline, perhaps, but it would be in no way true to the texture of this situation, nor descriptive of its many oddities.