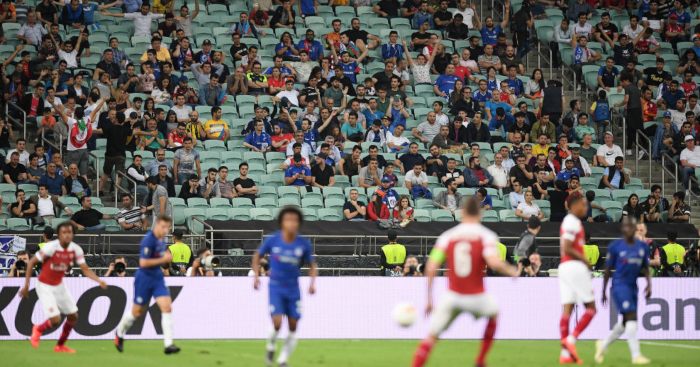 UEFA president Aleksander Ceferin was addressing the Oxford Union on Friday evening and, faced with questions about the logistical issues created by the recent Europa League final in Baku, he played a whole stack of familiar cards.

“We have to develop football everywhere, not England (and) Germany only.”

These are lines from the old FIFA script. In the days and weeks following the decision to host the 2018 and 2022 World Cups in Russia and Qatar respectively, a common response was to diminish the growing controversy as sour grapes – as an indignant squeal among established footballing nations, furious at having to share a game they considered their own.

That’s been forgotten in the wake of the revelations since. FIFA’s Executive Committee was exposed as a gang of pirates, Sepp Blatter was forced into resignation – and then exile – and the 2010 vote is now remembered with an entire paragraph’s worth of asterisks. But it’s interesting how well that initial deflection worked and how easily it seduced the world with its false narrative. The English, again, were making trouble because they hadn’t got their own way.

US Attorney General Loretta Lynch may not have been particularly fond of the English either, but that wasn’t reason enough to ignore an entire battalion of smoking guns. When the charges came down and the Swiss police marched on the Baur au Lauc, the result was an image which could never be re-framed or spun. Handcuffs for the executive committee, and a shaming perp-walk for FIFA. Perhaps something unhealthy had been at the root of objections to Russia and Qatar, but the issues were real enough.

Aleksander Ceferin’s UEFA is not Sepp Blatter’s FIFA; there’s no suggestion of impropriety. Nevertheless, at times of public relations crisis, it’s disheartening to watch him scrambling for Blatter’s old playbook. When faced with questions about the Europa League final that he’d rather not answer, his instinct is to point an accusatory finger towards the English.

UEFA began that process before that final in Baku was even played, responding to Arsenal’s written concerns about the event with a snide, politically charged line about the need for the game to be shared equally across the continent. As ‘men of sport’, surely Arsenal understood and would not object.

The trouble with that position is that it’s built on a lie. Or, at least, it’s based on the acceptance of UEFA’s generous self-determination. They see themselves as European football’s great, benevolent hero, slipping into that costume whenever there’s a new market to penetrate and the need to cast someone else as an enemy of footballing democracy.

“So you should see the happiness, the humbleness of people when they see live the superstars they like.”

This was the basis of Ceferin’s explanation for Baku. It was an event for people, for the man on the street. UEFA’s mission is to gift-wrap the game and deliver it around Europe, to challenge the orthodoxies, to share football’s warming glow. Where he actually witnessed such a response is an interesting question, though, given that 16,000 Olympic Stadium seats remained empty during Chelsea’s defeat of Arsenal; 16,000 seats that were unfilled even after tickets had been given away for free in a city of over two million people; 16,000 seats which were full when Chelsea played Qarabag in 2017, and again when Roma visited six weeks later.

This aching demand for imported, foreign football in Baku seems to have been built on a misconception. Or maybe that human factor was never really considered at all and is only now being weaponised to defend an event which, really, was an aesthetic nightmare. Ceferin delivered a European final which forcefully excluded the supporters of the two teams who earned the right to be there and is now trying to justify that by referencing the needs of a public who were themselves just an afterthought.

The opening paragraph of UEFA’s assessment of Azerbaijan’s bid confirms as much.

‘The Association of Football Federations of Azerbaijan (AFFA) wants to celebrate its passion for football and help UEFA and its commercial partners to access new markets and broaden their commercial appeal. The AFFA sees hosting the 2019 UEFA Champions League final as an opportunity to generate excitement across Azerbaijan and eastern Europe generally ahead of UEFA EURO 2020 and has produced a very creative and professional presentation of its vision, concept and anticipated legacy.’

‘New markets’ and ‘commercial appeal’ was the basis for this decision; it’s all there in writing. Hardly a revelation, of course, but still a reality which demands that Ceferin should temper his aggression and accept that, on this occasion, the balance struck between fans’ rights and his organisation’s commercial imperatives was horribly askew.

The potential balm would be such honesty. People understand that major finals are now a currency of political capital. They grudgingly accept that. They also recognise that sponsors and their various objectives inform all of these decisions and have done for some time. They tolerate that, too. What they object to, however, is being treated as an inconsequential statistic for the sake of appeasing those brands and politicians, and then being deceived as to why.

It’s insulting. Particularly given that anyone with a working internet connection can discover that Mastercard had big, public plans to roll out its cashless payment facility in Azerbaijan this year. They are a Champions League rather than Europa League sponsor, but as part of UEFA’s family of partners, Baku presumably worked very well for them indeed.

That’s fine, it’s not a smoking gun, but it is something that football’s administrators should be transparent about. Pretending, instead, that this controversy draws its energy from phantom English contempt is unhelpful, cheap and misleading. Arsenal and Chelsea fans wanted a proper response, a sincere mea culpa, but what they got – and continue to receive – is empty rhetoric and a UEFA President who persists in playing his generalisations about the English to the global gallery.

The Football Association did not support his bid for election in 2016; they backed Michael van Praag instead. Ceferin has clearly not forgotten, but carrying such a grievance is not befitting a man in his position. It certainly does not justify his blithe rejection of the issues raised by Baku and the concerning precedents which it has set.

And those are issues which will reappear very soon. Next year, Baku will host four games at the pan-European Championship – three group matches and a quarter-final. The chances of the draw sending a big nation to Azerbaijan are extremely high and when that happens, when thousands of Dutch, Italian, Spanish or Portuguese fans encounter the same trials and costs suffered in 2019, it will not be possible to depict that controversy as a confected melodrama, or just as another false complaint from an embittered island. When that happens, he’ll need a proper explanation.

That characterisation of English arrogance is hard to bear. Partly because it’s not unfair, of course. England is an insular nation and the Premier League’s financial primacy does create the perception of it being the centre of the football world. But that doesn’t disqualify English fans from the conversation, nor does it invalidate any concerns which are raised in a British accent. The Russia and Qatar decisions in 2010 did spawn a lot of disappointment and at the heart of that certainly lay some entitlement, but sports washing was no less of a problem and migrant worker abuse no less of a humanitarian crisis as a result.

Baku is not a comparable situation, but some of the attitudes it has exposed are very similar. It cannot be true that there’s no case to answer just because the English are the ones making that case.

It represents a gross mis-characterisation. The fallout from the Europa League final has involved the perpetuation of the myth that English fans want the game to move specifically around them. As if, given the choice, Arsenal and Chelsea would have preferred to contest the game at the end of the Piccadilly Line. These are fans who have spent the last eight months travelling all over the country and continent and doing so cheerfully. Away support is predicated partially on adventure and, within reason, each European season begins with the desire for trips to new places.

Importantly, though, that adventure comes with the caveat that those fans don’t want their loyalty exploited, and they don’t enjoy being treated as if they don’t matter, as if their ticket can be sold to someone else with no consequence. And that is the accusation levelled at UEFA now. It is the issue that Ceferin understands perfectly well but is now feigning ignorance towards.

“If we have two Azerbaijani teams playing in London nobody would complain. They would come and play without any problems. We decided a year and a half ago that we play in Baku, which has a modern stadium of 70,000. I think there is only one stadium in England that is bigger. They had to watch the game at 11pm because of the time difference but nobody complained.”

Ceferin is an educated, intelligent man, a former criminal defence lawyer with over a decade of administrative experience in football. He would understand what is meant by a false equivalency and he will know, also, that his non-sequitur flippancy is entirely inadequate within the gravity of this problem.

At the end of May, he was interviewed by Der Spiegel about the human rights abuses in Azerbaijan. They were rightly blunt and aggressive in their questioning, asking whether the decision to stage the Europa League final in Baku legitimised those abuses. His response was outrageously glib.

“The human rights situation is a problem. But there are issues with human rights in other European countries as well. Do you think that fans in Baku don’t deserve to see live football because of that?”

These were not phantom grievances concocted by disgruntled English (or German) football clubs or supporters, but pressing concerns raised by Amnesty International. The organisation’s UK director, Kate Allen, has referred publicly to the mistreatment of the LGBTQ community and to the political imprisonment of journalists. She was also insistent that Azerbaijan shouldn’t be “allowed to sports wash its appalling human rights record as a result of the football fanfare”.

But it was and it did. When they choose, football’s governing bodies celebrate their apolitical impotence. When they make decisions with a very real, very obvious political consequence, however, they somehow claim the same privilege. It’s an hypocrisy reflected in UEFA’s attitude towards its constituent public, too. When there’s a decision to justify, nothing matters more than those who love the game. When there’s a decision to make, nobody matters less.

That’s the appropriate lens. In neither its award nor reaction was the Baku final about the people of Azerbaijan and their right to watch live, first-class football. The issue at hand, as mandated by the single most pressing issue the sport faces, is whether those who created that society’s conditions deserved such a valuable commodity with which to embolden their position. Eventually, Aleksander Ceferin will have to answer that question with something more than bluster and bullshit.