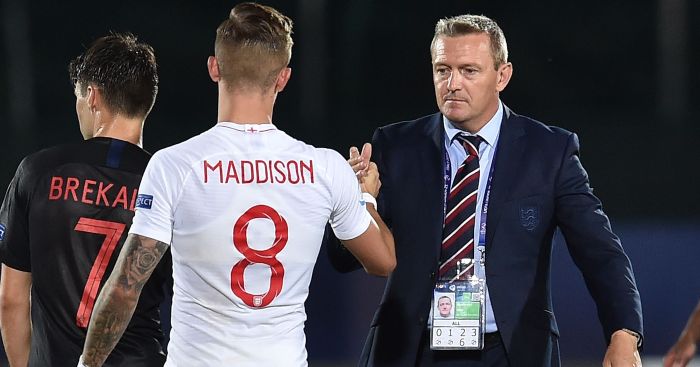 After England Under-21’s 4-2 loss to Romania in Cesena last week, Aidy Boothroyd’s post-match press conference ended with two questions that irked the England manager. The first was whether his new contract, handed to him on the eve of the tournament, contained any clause about performance in Italy – the insinuation was that he could not have met even the minimum target. The second queried whether he still believed that he was the right man for his job.

“That’s a private matter, but I will answer it,” Boothroyd began in response to the first. “No, there isn’t. This is about development.” The second question brought an even more emphatic answer: “I’m not going anywhere. They will have to carry me out.” One arm each and another person for the legs?

Boothroyd expressed surprise at questions over his future employment; he should not have been. Underage tournaments often become an ideological tussle between style and success, but at the Under-21 European Championship England produced neither. The pre-tournament joint favourites took one point from three matches (against Croatia in a dead rubber to decide who would finish bottom of Group C). They conceded nine goals in 270 minutes and saw their opponents miss two penalties.

If that all sounds a little depressing, prepare yourselves for the issues with style.

Boothroyd used a 4-3-3 formation that couldn’t be more different from Gareth Southgate’s version of the same shape. The centre forward was asked to play with back to goal and the wingers left isolated. England’s pass completion was the highest in the group stage, but don’t be fooled – it usually involved slow passing across the back before a more direct ball over the top was attempted. There were glimpses of quick passing play in midfield – usually when Phil Foden was on the pitch – but too often England became a muddle of component parts.

Boothroyd courted controversy with his team selections, and came close to admitting that he had got some choices wrong. Foden was England’s best player and goalscorer against France, but was left out against Romania in a must-win match to “manage his minutes”. Foden started just three Premier League games in 2018/19, and the decision reportedly confused several of the squad. Aaron Wan-Bissaka was dropped after the first game, while Dominic Solanke starting against France simply didn’t work. The substitutions, having been reduced to ten men, against France were startling.

England’s tournament was blighted by individual errors and lapses of concentration, but the system also left them vulnerable. Hamza Choudhury was excellent against France as a holding midfielder before being sent off, but his replacement Kieran Dowell is a passer more than a tackler. Without Choudhury, England were open to the counter attack. Romania identified and exploited that weakness.

Every manager must find a tactical strategy that works for them, but there is added scrutiny of the way England’s underage teams play. One of the key components of the ‘England DNA’ plan focuses on the style of teams. ‘How England teams play will be the strongest demonstration of the England DNA,’ the bumf reads. ‘Our aim is for all England team to demonstrate a consistent playing style based on the England DNA playing philosophy.’

That same England DNA document points to ‘tactical flexibility’, ‘counter-attacking’ and ‘retaining the ball to build the play’. Anyone who has followed Boothroyd’s career might raise an eyebrow at this juncture. At Northampton Town, his last domestic job before his close friend Dan Ashworth brought him into the England fold, Boothroyd was nicknamed ‘Hoofroyd’. It wasn’t intended as a compliment.

Nor too will Northampton fans have been surprised by England undoing their good work with a sending off. After the club had four players sent off in a run of four away league games under Boothroyd, former player David Artell tweeted that Boothroyd encouraged ‘murder tackles’ in training and believed he was responsible for the club’s indiscipline.

If Boothroyd’s appointment – and friendship with Ashworth – was initially controversial, he did make strides in 2017 when England reached the semi-finals of this same competition. But in hindsight, drawing with Sweden and beating Slovakia and Poland was merely matching expectation and England were fortunate to avoid Italy, Germany, Spain and Portugal in the group stage draw. With a better squad and higher expectations in 2019, they fell flat.

Less clear is why the Football Association saw fit to extend Boothroyd’s contract on the eve of a major tournament. FA technical director Les Reed spoke of an exciting summer under Boothroyd’s stewardship and the manager continuing his excellent work. Would it have hurt to wait until post-Italy to determine whether an extension was logical?

“Not only has he achieved successes on the pitch with the U21s but he has played a fundamental role in developing our group of young players, with many not only making the step up into the senior team but becoming regular members of the England squad,” was Reed’s assessment of Boothroyd’s tenure, but that’s a little rose-tinted. Trent Alexander-Arnold, Callum Hudson-Odoi, Ruben Loftus-Cheek, Marcus Rashford, Jadon Sancho, Declan Rice and Dele Alli, all in recent England senior squads and all still eligible for the Under-21s, have played a combined total of seven U21 games under Boothroyd. Beware overplaying his impact on their progress.

"We have to take the positives out of the way we play the game."

Aidy Boothroyd reflects on England's 4-2 loss to Romania U21s which sees The Three Lions exit the European U21 championships at the group stages. pic.twitter.com/vySC3yxQlH

This is not all on Boothroyd. He is a manifestation of an England coaching culture that must develop if we are to service our young players appropriately. Boothroyd is a product of his environment. There is not a long list of domestic coaches knocking on the door for this job, no long list of obvious candidates. Figures are hard to come by, but by last documented count (2013), there were 2,140 UEFA Pro licence coaches in Spain more than 1,000 in Germany. England’s number? 203.

Meanwhile, the fight for pathways at Premier League only gets harder. The percentage of starting spots given to English players dropped to 30% in 2018/19, and 19.9% at top-six clubs. Southgate is insistent that we must somehow arrest the slide through “grown-up conversations”. He believes that the proportion of English players might drop to 15% within a decade.

If the stability of high-level coaching with the international setup only becomes more important in those trying circumstances, England now face a personnel crisis too. England’s Under-16s currently have no head coach. Nor do the Under-17 team after Steve Cooper and Mike Marsh were appointed by Swansea City. England Under-18s will lose their manager this month when Neil Dewsnip steps down from the role. That leaves Keith Downing (Under-19), Paul Simpson (Under-20s) and Boothroyd. If this upheaval was what persuaded the FA to retain Boothroyd, they are doing so for the wrong reasons.

Away from the pitch, all change too. Ashworth has left for Brighton, head of talent identification Richard Allen left in October 2017 and Jonny Zenimer, the head of people and team development has also departed. Reed is the new technical director, joined by Dave Reddin (head of performance) and Matt Crocker (head of coach and player development).

The pressure is on that trio to recruit and nurture proficient coaches to fill the gaps, and the jury is out. Reddin has already overhauled the Talent ID programme and forced key personnel to reapply for their jobs. Last October brought accusations of a bullying culture as exclusively revealed by the Daily Telegraph.

If England have not quite wasted all of the goodwill accrued during 2017 by its underage teams, that is only due to the performance of the senior team since. Behind the scenes, the Football Association must fight to ensure that progress and the process do not disappear out of sight. If we are only as good as the standard of our coaches, there are difficult decisions to make. And that starts with their Under-21 manager.