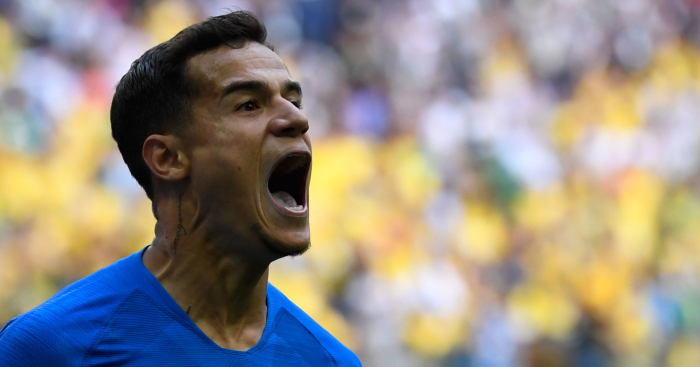 As the minutes ticked away at the Saint Petersburg Stadium, England must surely have been keeping a close eye on proceedings. Brazil have not failed to advance past a first World Cup group stage since 1966, but a draw against Costa Rica would have left them on the brink in Group E. Fifty-two years of hurt was coming to an end; football was coming home, and not to its usual residence in South America.

Even the greatest football teams and most talented players can be reduced to the most straightforward, reductive approaches. Costa Rica could not match up against Brazil on quality alone but managed to thwart the Selecao through organisation and work-rate. If there has been a theme of this World Cup, it was played out in real-time here.

Óscar Ramírez’s side had almost made it out; they could see the light at the end of the tunnel. But Brazil managed to block their exit just as they started to step through. After 90 minutes of intricate flicks, one-touch passing and thrilling counter-attacks, Brazil resorted to the Sunday League playbook: a cross was lofted into the penalty area, Roberto Firmino beat two defenders in the air to head down for Gabriel Jesus, and his poor touch quickly morphed into a fine pass for Philippe Coutinho to finish.

The sheer relief etched on the face of every Brazil player was striking. This squad arrived in Russia as favourites, not restricted by questions over their manager like Spain, France or Belgium, and possessing a more rounded selection of players than Portugal or Argentina. While victory in 2014 could lead to German complacency, Brazil’s 7-1 semi-final humbling at their hands is a wound from which they are still recovering.

“Brazil are better prepared in a number of ways,” said Paulinho earlier this week. “That is just part of football – in four years you learn a lot of things.” And that is undeniably true. Brazil have learned that they have more than one leader, one lynchpin.

The idea that experience is only ever a good thing has long been scoffed at. It is an oversimplification, a lazy assumption. Brazil are not worse off for having just six survivors from their 2014 squad in this one, with the other 17 embarking on their first World Cups. Those unencumbered by the pain of Belo Horizonte are more likely to prosper.

“We need to take responsibility and our heads have to be in the right place,” said Coutinho after his strike in the 1-1 draw with Switzerland last week. The 26-year-old was not even close to making that 2014 squad, only returning to the side in September of that year, his first recall since 2010. He, as any Brazilian, was damaged by that Germany defeat, but on a less personal, inhibiting level to some of his teammates.

Time is a great healer, but so is victory. The tears of Neymar – targeted throughout and again the recipient of the most fouls – after the game were questioned and derided. But this is a player who carried the hopes of a nation on his shoulders four years ago before his body failed him; the triple threat of expectation, responsibility and guilt weighs heavy. Costa Rica ensured his lasting mental scars from missing that game had physical ones to match.

By the time Neymar added a certain gloss to the scoreline with Brazil’s second, a curse had been lifted. An unprecedented run of four World Cup games without victory was close to reality, and with it yet more pressure. The second goal was a cork released from the champagne bottle.

This was not quite champagne football, of course. Brazil were the better side, if not completely lopsided. Each of their five first-half chances were created by Marcelo, Coutinho and Neymar, the heart of this team beating down its left-hand side.

Tite clearly noticed the imbalance, and sought to redress it with the introduction of Douglas Costa for the ineffective Willian at half-time. Brazil created three chances in the first 15 minutes of the second half: the right-hand side of Fagner, Paulinho and Costa accounted for all of them.

It was almost enough, but not quite. Jesus crashed a header against the crossbar, while Neymar and Coutinho forced saves from the excellent Keylor Navas. But with each missed shot, each misplaced pass and every foiled dribble, the exasperation levels rose.

Neymar was, as ever, front and centre. His rough treatment reached a crescendo when he collapsed in the penalty area after a slight tug of his shirt, with the referee pointing to the spot. A further VAR check confirmed that our eyes doth not deceive, but Neymar certainly does: his dive was the final call for help from a player running out of ideas.

Tite was fortunately not hindered by the same issue, and deserves great credit for rescuing a result. Costa opened up the game in place of Willian, but the introduction of Firmino was integral. He provided a much-needed focal point, a platform from which Brazil could finally express themselves. He brings something no other player in this squad offers, and is surely in contention to start the next game.

This was their first win at the tournament since edging past Colombia in the quarter-finals four years ago. The demons have not quite been exorcised, but Coutinho has started the painstaking ritual.