Maurizio Sarri saw some positive signs at Wembley. But he won't emulate Pep Guardiola without help from his club... 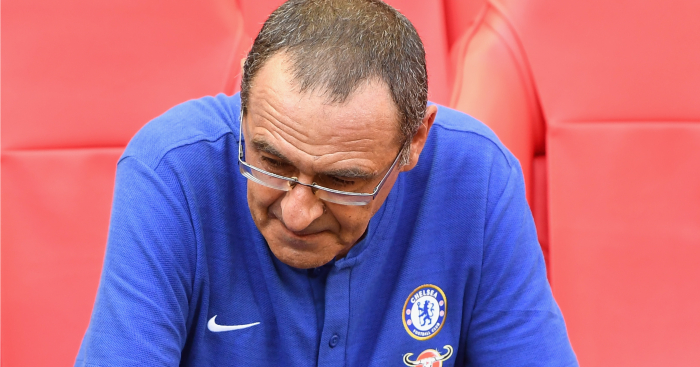 Neither Maurizio Sarri nor Pep Guardiola have missed an opportunity to gush over the other prior to their meeting at Wembley. The mutual appreciation dates back to even before Guardiola spoke last season of his belief that Napoli were playing the best football in Europe, which came as no surprise. Sarri’s Napoli were built in Guardiola’s image and so too will be Chelsea.

The Blues’ Community Shield defeat offered further proof of that, though Sarri’s previous body of work was evidence enough. This was the first real glimpse we have had of the new manager’s preferred 4-3-3, matching up to City’s well-oiled machine, but the contrast was as stark as you would expect between a team starting their third season under Guardiola and a depleted side that has been afforded only three weeks with Sarri.

The season’s curtain raiser was akin to watching one of the greatest bands at Wembley being supported by their own tribute act. But with the exception of Jorginho, Sarri had little idea prior to kick-off whether any of the performers thrust upon him were suited to his tastes.

After the 2-0 defeat, there are perhaps even more question marks in Sarri’s mind. There were some signs of encouragement at Wembley for the Blues as they begin their rebrand, but the new manager, dressed seemingly in a Chelsea-branded boiler suit, has a mountain of work before him.

Sure, Sarri will accentuate the positives. He wants his sides to build from the back and pass their way around, or ideally through, their opposition and the Chelsea players showed a willingness to follow the manager’s instructions. It took until the 74th minute for City to nudge ahead in the passing count, with Sarri’s side making 526 passes – a 33% increase on the 395 they made during the clash with City at Stamford Bridge last season.

The quality of their passing was better too. At Wembley, they completed 87% of their passes. That’s a better success rate than all but three Premier League games last season – the home wins over Brighton and Stoke, and the away victory at Huddersfield.

Those tallies represent a good foundation to build upon. Like City, Chelsea were clearly instructed to pass through even the highest of presses and although they were rarely caught out – when they were, they were not punished – it still looked forced, at times excruciatingly, in contrast to City’s slick possession rotation around their own goal.

Sarri’s men will inevitably become more comfortable with that approach as the season progresses and confidence builds. The Italian boss will be somewhat satisifed in that respect with what he saw, but the step from possession to penetration is a far greater leap to make. If Chelsea are cutting back on the back-to-front passes, then they will have to become more incisive if they are to find a different route to Alvaro Morata.

The centre-forward managed only 20 touches during three-quarters of a game on the pitch and only one in the City box, which was a wayward shot. That overall figure was the lowest of any starter, yet no one else in either XI was dispossessed more than Morata. The Spain centre-forward’s performance was labelled “a disgrace” by pundit Richard Dunne and one of Sarri’s most urgent matters to address this week must be the recruitment of a goalscorer. It won’t be the one he wants, though.

"If they let Hazard leave, they're finished!"

Kante? Courtois? Hazard? Willian? 🤔@rioferdy5 and @chris_sutton73 believe Chelsea must hold on to their star players to achieve anything this season. pic.twitter.com/iXlU3TYzpS

A centre-half is also on Sarri’s wishlist, though already he will have sussed that such desires too often remain unsatisfied by whoever takes the lead on Chelsea’s recruitment. David Luiz was brought back for his first Chelsea match in precisely six months and despite the Brazilian saying he wants to stay at Stamford Bridge having outlasted Conte, his performances must improve. Too often, both he and Antonio Rudiger played as though they still had a third centre-half to cover for them. Chelsea won’t face opponents as incisive as City every week, but the defensive line still requires significant remodelling.

When Conte recognised that problem six games into his Chelsea reign, he reverted from a back four to a three. The previous manager found a system that suited the players at his disposal. Sarri is far more wedded to his shape and he faces the perilous task of imposing a formation on a group of players perhaps not entirely suited to it.

If he is to be successful, Chelsea will have to learn the lessons taught to everyone by today’s Wembley winners. Guardiola struggled during his first season and although there was enough shoots of positivity, the manager labelled a trophy-less campaign a disaster. To remedy the problem, City showed patience and demonstrated their faith in his methods in the form of significant transfer funds.

Chelsea have little choice but to offer Sarri similar time and resources if the Italian is to come close to replicating Guardiola’s success.