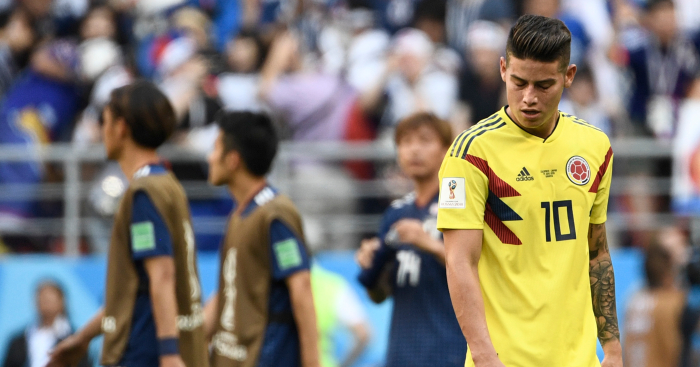 “I think this World Cup won’t be the same as the last one,” suggested Carlos Sanchez last week, both stating the obvious and foreshadowing his own fate. The midfielder was one of the unheralded stars of Colombia’s memorable run to the quarter-finals in 2014, the defensive foil for James Rodriguez’s heroics. His performances were good enough to earn a move to the Premier League. Aston Villa remember him not so fondly.

Four years on, Colombia have joined the party again; Sanchez was once more on the guest list. And so insistent was he in his claim that Los Cafeteros “don’t feel ourselves favourites” in Group H that he took it upon himself to offer expected whipping boys Japan a foothold in their meeting on Tuesday.

Just three minutes had passed when an uncharacteristic mistake from Davinson forced Carlos into an uncomfortable situation, the 32-year-old throwing an arm up to block Shinji Kagawa’s goalbound shot. The Steven Taylor-esque collapse to the ground failed to deceive Damir Skomina, the latter Sanchez was dismissed, and Kagawa converted the penalty.

This World Cup had to wait 15 games for its first red card, but it was certainly a significant one. The script before the game had Colombia cast as the aggressors, skillful and hard-working, with Rodriguez and Radamel Falcao the protagonists – even if injury did consign the former to a place on the bench. Japan were not quite here to make up the numbers, but theirs was supposed to be a bit-part in the wider production.

Sanchez saw to that. His intervention boosted Japan, and doubled the weight on Jose Pekerman’s shoulders. Rodriguez’s inability to prove his fitness starved Colombia of their key player and creator, meaning the responsibility would have to be divided. Juan Quintero was his direct replacement, but Juan Cuadrado, Jefferson Lerma and Jose Izquierdo would have to share the burden too.

Quintero succeeded where Cuadrado in particular failed miserably. The former cleverly slotted a free-kick beneath the wall and just through Eiji Kawashima’s grasp in the 39th minute, but Cuadrado simply had to be substituted nine minutes earlier. He had been terrible, reducing the ten men of Colombia to a generous nine-and-a-half. His decision-making was abhorrent, matched only by Sanchez’s at the start of the game.

It left Pekerman in an unenviable position. Only three outfielders have played more than 45 of his 78 games in charge: Sanchez (62) had been sent off, Cuadrado (62) had been necessarily sacrificed, and Rodriguez (61) was unfit. His three musketeers had, to varying degrees, failed him. After the headache of Rodriguez came the stomach pains of Sanchez and the stubbed toe of Cuadrado. Pekerman was in trouble.

He reacted as well as he could. The introduction of Wílmar Barrios helped shield the defence, while Quintero was granted more space on the right. But it is telling that Colombia did not have a single shot in the 51 minutes after the equaliser; they could only mask their one-man deficit for so long.

By the time Yuya Osako handed Japan the lead once more, Colombia were running largely on fumes. David Ospina, the only player who has made more appearances under Pekerman (65) than the aforementioned unholy trinity was laughably poor, watching as the header sailed over him and into the back of the net. The Unfantastic Four had finally assembled.

Rodriguez had been introduced but was struggling to keep the pace, his only telling contribution being a frustrated booking five minutes from time. Falcao worked hard but had no chances to convert. Japan defended well, and deserved their victory in the circumstances.

The problem for Colombia is that they were circumstances entirely of their own creation. A World Cup campaign that started with a 2-0 qualifying victory over Peru in October 2015 was put in serious jeopardy three minutes into the competition proper by one of their own players. World Cup fates are decided on moments; Sanchez ensured this was not Colombia’s finest.