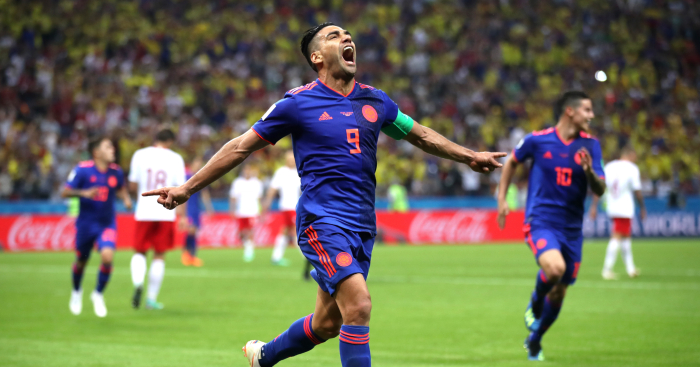 Between 1998 and 2010, 46 teams lost their first match at the World Cup – only four of them got to the knockout stages. Opening-day defeat leaves no margin for error. That can crumble even the strongest unit.

Colombia’s game against Poland was the first knockout match of this World Cup. After surprise defeats to Japan and Senegal respectively, the two highest-ranked teams in Group H knew that defeat would cause their instant elimination. Given the age of certain key players within these two squads, it would provoke a rafts of retirements and the sacking of the manager. England is not the only country for whom disappointing early exit causes root-and-branch review.

But if these two nations entered the pitch in the Kazan Arena as under-pressure equals, Colombia and Poland dealt with the shadow of the sword of Damocles in entirely opposite ways. Colombia, undone by an early red card and penalty in their opening fixture, made atone for Carlos Sanchez’s error. They were rampant in front of 30,00 supporters. Only Russians, Brazilians and Argentinians have bought more tickets than them.

Colombia’s front four is truly a thing of great wonder. Radamel Falcao is playing in his first World Cup at the age of 32 but held the ball up with the strength of two or three men. He took his goal with outrageous ease, like watching an expert burglar twinkle toe his way into a country house and steal the silver.

Juan Cuadrado created space for himself with his movement and got round the back better than a John Barnes rap. James Rodriguez, unable to start against Japan, pulled the strings and delivered a wonderful dinked cross for Yerry Mina’s goal as if the 2014 World Cup ended a fortnight ago. By the time he had curled the ball round for Cuadrado to score the third, you expected a giant moth to land on James’ shirt and wink at him in recognition.

Juan Fernando Quintero is the mystery member of this Fab Four, a footballing Doosra. He almost gave up the sport entirely in favour of music, but made the right choice. Quintero is like nothing else in this World Cup, described best as Xherdan Shaqiri on double-speed mode. Between him and Falcao, there is more talk of resurrection than during Easter week.

As for Poland, they are comfortably the biggest disappointment of this World Cup. We poked fun at Germany, but they may well grow stronger. We watched open-mouthed as Argentina threatened to implode, but their problems were well-documented before this tournament began. Poland were sold as the perfect balance of experienced and youthful. For every Jakub Błaszczykowski and Łukasz Piszczek, a Dawid Kownacki and Piotr Zieliński.

Adam Nawalka’s team had the top scorer in European qualifying but conceded too many goals for the manager’s liking. Nawalka attempted to make Poland more secure, with a low block and direct football. In doing so he removed everything that made them interesting to watch and most of what made them successful.

Robert Lewandowski, who scored more times in qualifying than most nations, may as well not have travelled east. So starved of service was he that he began to roam into his own half after just ten minutes and barely registered a touch in the opposition penalty area. If this team was built to service a magnificent centre forward, the exact method wasn’t clear. Long balls from panicked defenders to a striker with no teammate within 30 yards? This was more Panama than Poland.

While England and Belgium are supposedly making plans about where to finish in Group G, both would do well to avoid this Colombia team. The weight of support is breathtaking (every time the camera panned to the crowd another child was staring in starry-eyed wonder) but so too is the ceiling for their attacking potential.

The destiny of this group is far from decided, but Colombia know that victory over Senegal will take them through. From early adversity in their first game, something special could still build. Those four teams to lose their first group game and still progress again: Turkey 2002, Ghana and Ukraine 2006, Spain 2010. An eventual quarter-finalist, semi-finalist and winner included.