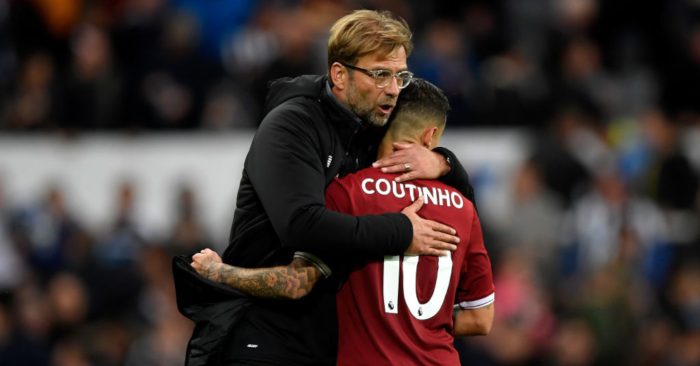 ‘Liverpool may have lost Coutinho but they have gained the opportunity to see the very best of Klopp,’ wrote Daniel Storey last January, in a piece we are now duty-bound to call prophetic. As we all agreed and he wrote: Liverpool had received the second biggest fee in football history for a player who would not even make a World XI. Indeed, he would have struggled to make the bench. Little over a year later, most people would leave him out of a second or third World XI, including most Barcelona fans, frustrated that the Brazilian remains their club’s record purchase.

It’s obviously not an exact science, but The Guardian naming four Liverpool footballers above Coutinho in their top 100 footballers list in December feels about right. By this December, he may well have been usurped by one or two more, even if he adds the Champions League to two La Liga trophies while the Reds remain bereft of silverware, as still seems the likeliest scenario. The truth is that his move – made for the kind of money that looks ever more ridiculous in the HD of hindsight – has benefited Liverpool far more than their Champions League opposition. Liverpool sold a luxury player they did not really need to a wounded club that wanted to make nothing more than a narcissistic statement. It was a beautiful gift very gratefully received by the Merseyside club, who duly used the money to upgrade their weakest areas. This is the red house that Philippe helped to build, the proceeds from his sale proving far more valuable than any swerving shot from distance.

Jurgen Klopp was incredibly lucky to inherit Coutinho – not because he fitted into his vision for Liverpool, but because he really did not. He worked with him, and made him valuable at exactly the right time when Barcelona were in the market for something valuable, but ultimately he was a playmaker in a team that had no real need for a playmaker. As Klopp himself had said in 2016: “Think about the passes you have to make to get a player in a No 10 role in a position where he can play the genius pass. Counter-pressing lets you win back the ball nearer to the goal. It’s only one pass away from a really good opportunity. No playmaker in the world can be as good as a good counter pressing situation.”

Imagine the joy of your most valuable player being basically dispensable. Imagine the joy of your most valuable yet dispensable player being roughly the same price, combined, as the finest centre-half and goalkeeper available on the market. When people write theses about how second-tier clubs can take advantage of the football food chain, they will cite Liverpool’s transfer business from the last 18 months. Sporting directors dream of this perfect scenario: sell a cheaply bought player for a barely believable high price and yet somehow emerge with a far better team. Yes, Liverpool have spent above and beyond that fee received from Barcelona, but their net spend over the last four years is still lower than that of Bournemouth. And the jewel in the crown of that transfer business is undoubtedly the sale of Coutinho, who moved for approximately three-and-a-half Mo Salahs.

And the uncomfortable truth for Coutinho is that his dream move has been a relative disaster. There have been goals – 21 in total – and there have been trophies, but Coutinho is utterly unloved and even more dispensable than he ever was at Liverpool. Not dynamic enough to play on the wing and not comfortable enough in possession to play in central midfield, the Brazilian is the marquee signing without a permanent place in the side. He largely lines up on Barcelona’s left side but has completed 90 La Liga minutes just once in the last three months; the revelation that the Spanish giants turned down a desperate-to-join Kylian Mbappe to sign first Ousmane Dembele and then Coutinho – both for over £100m – suggests possibly the worst piece of high-level transfer business of the last decade. And they could regret it for the next decade.

Meanwhile, Liverpool are on the verge of their second consecutive Champions League final with no regrets at all about their latest foray into life as a selling club. They weighed up the pros and cons of bowing to pressure from Spain and from the player himself and eventually found that one list was twice as long as the other. And they have earned the right to do the same again if serious moves are made for Sadio Mane, Salah or Roberto Firmino this summer. Right now, Barcelona would take any one of that triptych over the man who has spent the last year enhancing Klopp’s reputation rather more than his own.