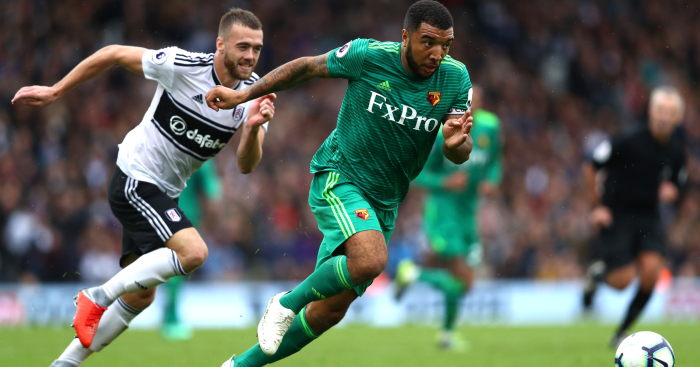 Troy Deeney doesn’t fit the template of what Gareth Southgate wants an England player to be. The manager said so himself but the Watford forward’s form is prompting suggestions that the Three Lions’ leader may have been a little too rash.

It is not as though Southgate is blessed in the striker department. Currently, he can only count on a worn-out Harry Kane; Marcus Rashford, who is used in a different position for Manchester United; and Danny Welbeck, who isn’t used often enough by Arsenal.

Slavisa Jokanovic, the ex-Watford manager who had to prepare his side to face Deeney at Craven Cottage today, is among those calling for Southgate to give the 30-year-old an opportunity: “I expect this player will one day play for England, he deserves it.”

Deeney’s display suggests the Fulham boss made a valid point. After suffering their first defeat of the season, Watford showed no signs of a hangover – as Javi Gracia predicted – as they took the game to the Cottagers. The home defence appeared as ragged as you might expect of a rearguard that has shipped the most goals in the Premier League so far this term, with Deeney linking up seamlessly with strike partner Andre Gray and Will Hughes running from deep off the right flank.

Traditionally a battering ram of a centre-forward, Deeney is showing it’s not too late for an old dog to learn some new tricks. Gray led the Hornets’ line with Deeney dropping deeper to connect Gracia’s midfield and attack and for the first hour, Alfie Mawson and Calum Chambers were flummoxed. Mawson, already on a booking after being outmuscled by Deeney, was put out of his misery at half-time as part of a double substitution, and it was only after Jokanovic tinkered that the hosts began to feel their way into the game and earn a point.

If Southgate doesn’t see Deeney as a potential international No.9, the England manager certainly won’t fancy him as No.10. But his role at Watford allows him to showcase what he could offer as the furthest man forward. “I think that we play slightly differently,” said Southgate when comparing his side with Watford, but Deeney is demonstrating that he is more than just a thorn in the side of centre-backs – he can link up as part of a double act or even a trio.

That was a problem during England’s run to the World Cup semi-finals. In their toughest battles against Colombia and Croatia, Kane was completely isolated and unable to connect with Raheem Sterling, Jesse Lingard or Dele Alli. That is not to say that Deeney would fare better than Kane in the same conditions, and Southgate’s insistence on playing from the back doesn’t bode well for the Watford striker.

But it is not like the England manager to close his mind to alternatives and, as Deeney suggests, he could offer “a different dimension”. If England’s Plan A, centred around building play up from the back, is foiled then there is no shame in having a Plan B involving a more direct route forward.

Aside from Kane, there is no one else in form and available to Southgate to perform that role. The England manager is wedded to the idea of promoting from the youth ranks but Tammy Abraham and Dominic Solanke are nowhere near ready to make the step up.

And, also as Deeney himself has mentioned, there are worse role models for England’s young players. The striker, who served time for affray in 2012, has matured, even more so in recent months since turning 30 in the summer, when some self-analysis saw him shift a stone to leave him in the best shape of his career, which is evident in his form. He has been open enough to discuss at length, amongst many other topics, his mental health and the benefits a modern approach to his wellbeing have brought.

Combine that with the rough, tough, more old-school edge on the pitch, and it’s hard to see why Southgate wouldn’t benefit from at least inviting Deeney to be a part of his squad, if not for the Nations League double header next month then the clashes with USA and Croatia in November. If the Watford skipper continues his current form, Southgate will have to think very hard about reconsidering his stance.