There are many reasons to have a pop at Jose. Letting De Bruyne, Salah etc go is not one... 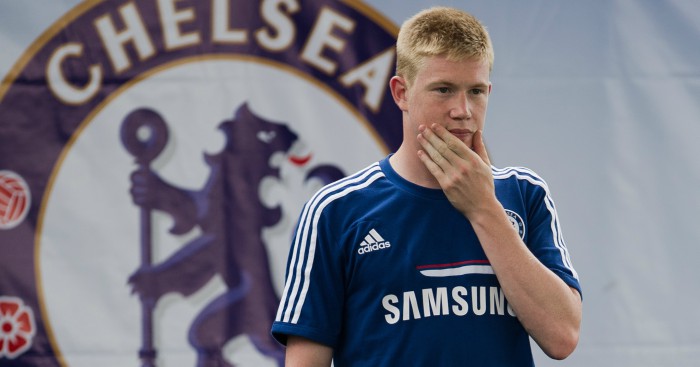 “I would give everything for him. I would leave that pitch in a coffin for him and every player felt the same.” Maybe not every player, as John Terry later hinted, but the former Chelsea captain’s point was clear: Jose Mourinho’s judgement deserves to be trusted.

The Monday Night Football conversation, though, soon turned to what many consider to be Mourinho’s greatest mistakes and biggest weakness: allowing talent like Kevin De Bruyne, Mo Salah and Romelu Lukaku to slip through his fingers. Should Chelsea regret how they cast aside perhaps £300million worth of talent? Jose’s disciple toed the part line: “Not really, because at the time they didn’t make our team stronger.”

“Let’s not forget we were one of the best teams probably the Premier League has ever seen, in the early days when they arrived. So they were coming into one of the best sides which was even more difficult. When they come in can they make a big enough impact to sustain and keep their place? No, it’s very difficult to do.”

Terry needs correcting on one point. When De Bruyne signed Chelsea were indeed Champions League holders but Roberto Di Matteo’s side were by no means ‘one of the best teams the Premier League has ever seen’. By the time he and Salah made their debuts, Mourinho’s most pressing concern was making the Blues competitive with the Manchester clubs and Liverpool, who were about to embark upon a thrilling title push.

But, as uncomfortable as many may find it to discover themselves in agreement with Terry, the broader point he makes about the likes of De Bruyne not making the grade at Chelsea is absolutely correct. Mourinho and the club hierarchy did let some incredible talent walk away from Stamford Bridge. Two of our Top 10 Players of 2017, in fact. But those decisions were made for the right reasons at that time.

De Bruyne’s situation deserves context. The Belgian was not an academy graduate, like Terry, who ever felt a strong bond with Chelsea, nor did the club ever feel he deserved more patience or appreciation than any of their other senior recruits. When Chelsea paid Genk £7million for De Bruyne in January 2012, he already had two senior Belgium caps. By the time he made his Premier League debut 18 months later, age 22, after a season at Werder Bremen, he had 13 caps and would have played at Euro 2012 had Belgium qualified.

So it was entirely reasonable for Mourinho to judge De Bruyne in comparison with the other five attacking midfielders at his disposal at the time: Eden Hazard, Oscar, Juan Mata, Salah and Willian, who moved to Stamford Bridge after the opening weeks of the season, while Andre Schurrle also performed in a wide role on occasion. In between those deals, De Bruyne was handed starts in two of Chelsea’s first three Premier League games.

By his own admission, De Bruyne did not excel in those appearances. During his Premier League debut on the opening day of the season, he offered an assist in a 2-0 win over Hull which earned the Man of the Match award from Sky. ‘I played a good game, but I won’t say I played brilliantly,’ he admitted in his autobiography. In Chelsea’s third match, at Old Trafford against David Moyes’ Manchester United, Mourinho trusted him with a place on the right.  ‘I didn’t perform that well,’ he reflected and was deservedly hooked midway through the second half.

Even before his debut, De Bruyne was thinking of leaving Chelsea. He had agreed terms with Jurgen Klopp’s Borussia Dortmund to replace Mario Gotze but Mourinho reassured him that he would be given opportunities, and limited though they were, the Belgian did not seize his chances. His attitude also failed to impress the manager, who did not feel that De Bruyne was reacting to his situation in a positive manner. Mourinho stated as much during a Champions League press conference at Steaua Bucharest – a trip which De Bruyne missed after a poor performance when handed another start at Swindon in the League Cup.

The fact that De Bruyne admits he trained harder, losing three kilos and two per cent of his body fat, after that public rebuke suggests Mourinho made a fair point. De Bruyne simply did not deserve to play in front of Hazard, Oscar, Mata or Willian. As he has admitted, sitting on the sidelines ‘drove him crazy’ and he pressed ‘in a friendly way’ for a permanent transfer, not another loan, which history suggests Chelsea would have sanctioned.

“At the beginning, Mourinho opposed a transfer. He wanted me to fight for my place,” revealed De Bruyne, but the player was insistent. Chelsea were, and still are, accused of stockpiling players, but on this occasion, they granted the wish of a fringe player who did not yet possess the traits to excel in the first team. With Wolfsburg prepared to pay £20million, what else were Mourinho and Chelsea to do?

Of course, hindsight without proper context does not show either the club nor the manager in a positive light. But allowing De Bruyne, as well as Salah and Lukaku in similar circumstances, to leave was the right decision. The only other alternative was to play De Bruyne ahead of other stars until he found some form. At what potential cost?

Management in the modern game, for Mourinho and almost anyone else, is at most a two-season business. In an ideal world, every manager should feel comfortable enough to consider the future alongside the present, but almost none are afforded such a luxury. When the demands upon Mourinho and his peers are to win and win now, why should he put blind faith in a player that no-one anticipated would reach 2017’s astonishing levels, especially over others who had proved more worthy of his trust?

It is a fact of life in football that the development pathways of a club and a player do not always run parallel to one another. As Manchester United and Paul Pogba discovered. In which case, if there is a scenario in which all parties can part on reasonable terms, as happened when De Bruyne departed Chelsea, then everyone is happy. It was the right move at the time and that particular chapter in history should not be rewritten to suit anyone’s narrative.

There are plenty of sticks with which to beat Mourinho. You cannot include among them De Bruyne, Salah and whichever other young talent failed to break through under his watch.