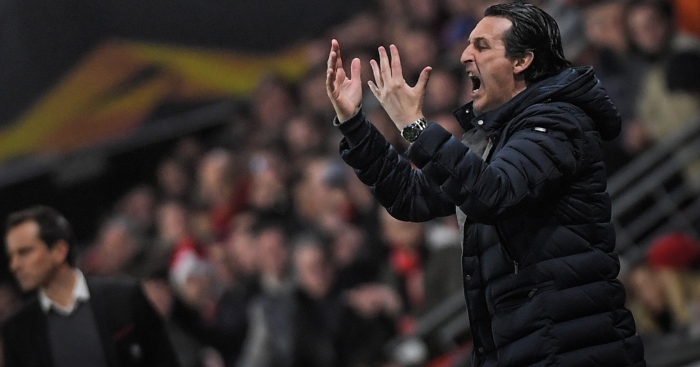 Unai Emery has done a creditable job in trying circumstances since taking over at the Emirates. But, evidently, the manager is yet to find a remedy for Arsenal’s tendency to self-implode.

Four days on from a north London derby the Gunners chucked away at both ends, Emery watched his side capitulate in France in the face of an eager Rennes team as deep into a European competition as they have ever been. Alex Iwobi’s early opener gave Arsenal a platform upon which to build but, instead, the ground caved in after a familiar show of ill-discipline.

Two bookings within seven minutes for Sokratis Papastathopoulos left Arsenal a man light for the final 50 minutes while a thunderbolt from Benjamin Bourigeaud – following up his own poor free-kick to unleash an unstoppable half-volley – from the subsequent restart also deprived Arsenal of their lead. Prior to the Greek defender’s dismissal, Emery’s men were comfortable. After, they wilted.

Neither Emery nor his players appeared clear on a plan to cope with a deficit of manpower. Shkodran Mustafi was the obvious candidate to step into Sokratis’ role, but Henrikh Mkhitaryan was the rather more surprising choice to fill in for Mustafi at right-back while Ainsley Maitland-Niles remained perched on the bench.

Arsenal switched to a 4-3-1-1, which left Mkhitaryan – and Nacho Monreal on the opposite flank – horribly exposed, especially with Hatem Ben Arfa allowed the freedom to roam across the Rennes front line as he pleased. Having chosen not to react at half-time, Emery took eight minutes to respond to Rennes’ raids down the wings, and with Monreal having a particularly hard time up against rising star Ismailia Sarr, it was thought that Matteo Guendouzi might offer the Spaniard more cover than Iwobi.

Emery thought wrong. Monreal’s torture continued while Guendouzi watched on – at times, almost literally. The young midfielder, back on home soil, was culpable for both Rennes’ second-half goals. The hosts’ second with which they took the lead came from a lucky break which Guendouzi was too slow to chase down. Sarr was offered too much time to cross, while Monreal had not enough to adjust his body position to do anything but divert the ball beyind the otherwise-excellent Petr Cech on his own homecoming.

Emery could present that concession as a stroke of bad luck, but Rennes’ third was a mess entirely of Arsenal’s making. With two minutes to go, a one-goal deficit would have been a satisfactory outcome given the circumstances. But the gullible Gunners gave away possession after Monreal had taken a throw-in by the Rennes’ corner flag and within two quick passes, the hosts had switched play and created a five-versus-four as they sought to extend their advantage.

A counter-attacking masterclass from Rennes! 😮

Substitute James Lea Siliki chose the perfect time to deliver the cross of the night, but it hardly needed to be postage-stamp precise. Having burned off Guendouzi and Lucas Torreira with disturbing ease, Sarr could easily have adjusted his run and still met the delivery without competition. The only Arsenal player who showed the necessary haste in their retreat was Aaron Ramsey, who had been brought on for Pierre-Emerick Aubameyang – another questionable move on Emery’s part.

Aubameyang turned in another below-par performance, perhaps the worst yet, on an evening the centre-forward was presumably looking to atone for his late penalty miss in the derby last Saturday. Perhaps his was a thankless task after Sokratis’ exit and Aubameyang might complain about the quality of service on the all-too-rare occasions he received any, but Arsenal’s top scorer offered so little threat on the counter-attack that Emery decided to sit him next to Mesut Ozil for the last 20 minutes. Presumably that is where he will stay when Manchester United rock up at the Emirates on Sunday, but Emery has no choice but to hope Aubameyang can get his act together in time for the return leg next week if Arsenal are to have any chance of overturning a two-goal deficit in Europe for the first time since 1970.

Perhaps Aubameyang, like his team-mates, is feeling the effects of a run that has seen Arsenal play five games in 15 days. By this time next week, it will be six in 22. After that, they have a two-and-a-half-week break. But any repeat in the next two matches of the dereliction displayed in their last two could see all their good work wasted before they can catch their breath.