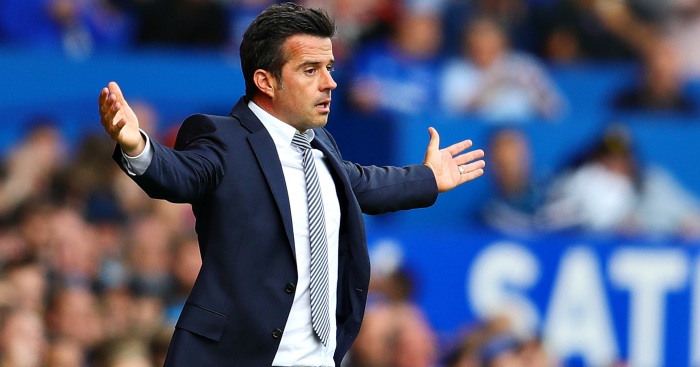 “It is so easy to create a crisis inside Everton Football Club.” Indeed, Marco Silva is making it look like child’s play.

The Toffees boss was in bullish mood ahead of the visit of Sheffield United but after another lacklustre 90 minutes played in the absence of any specific plan, Silva was a lot more subdued upon facing further questions over where this Everton team is heading.

On today’s evidence, and that offered during the opening six games of the season, that destination might not be the top half, let alone the top six. A 2-0 defeat to the Blades, who kept Everton on a lead all afternoon despite allowing them 70 per cent possession, is another damning indictment of the lack of progress Silva is making with his players, who appear to have stopped listening to the Portuguese manager.

Either that, or Silva is not getting his message across. Neither is a great look for the manager of a team expected to upset the establishment in the top six.

Silva bemoaned individual errors once more and they were certainly a factor against United, with Jordan Pickford stitching up Yerry Mina for the opener while Mina himself was at fault for the second goal which prompted a mass exodus from Goodison Park. Haplessness has become such a recurring theme that it can no longer be put down to misfortune.

As Sheffield United demonstrated to Everton, good organisation and a togetherness can cover for such mistakes. The fact Everton are being punished so often for theirs says as much about the unit as the individuals within it.

There were holes in Silva’s plan from the start. Everton started with Fabian Delph as a holding midfielder with Morgan Schneiderlin slightly further forward trying to link up with Richarlison and Bernard, while Gylfi Sigurdsson wandered everywhere except where he might have been of any use.

Only Bernard offered any guile yet it was he who was replaced 10 minutes into the second half, when Silva began throwing all the sh*t he could muster at Sheffield’s United wall in the hope that some of it might stick. With 20 minutes remaining and all three substitutions made, Everton had Richarlison, Sigurdsson, Moise Keane, Cenk Tosun, Alex Iwobi and Theo Walcott all on the field though apparently without any idea of what shape they might form.

"It was a bad result and in the second half it was a bad performance."

Marco Silva was not happy with his Everton team's display today after losing at home to Sheffield United.

United capitalised on the chaos to extend their lead through Mousset. John Lundstram took Mina for a walk to the right touchline before playing a simple pass into the path of Mousset making a simple run which escaped the attention of the rest of the Everton defence. A nutmeg on Pickford later and Everton were down and out.

There were 11 minutes remaining, but no hope. Few grounds do angry like Goodison Park, but the Everton supporters could barely muster the energy to scorn. Instead, many just headed for the exits having seen their side lose for the fourth time in the last five against newly-promoted sides.

When Silva begins his latest inquest, what he will find is a side which has conceded two goals in each of the last five matches in all competitions (Villa, Wolves, Lincoln and Bournemouth had their fun before the Blades came to Goodison) while at the other end, they have scored five in six Premier League games having fired blanks in half of them.

His verdict is likely to consist of more questions than answers before a tricky Carabao Cup trip to the other side of Sheffield in midweek. Since leaving Estoril in 2014, Silva has managed five clubs, with 53 games being the longest of any of his reigns – he hit the half century with Everton today. This is a manager who is yet to prove that he can retain the attention of any squad beyond a season or so and all the signs suggest the Everton squad is switching off Silva too.