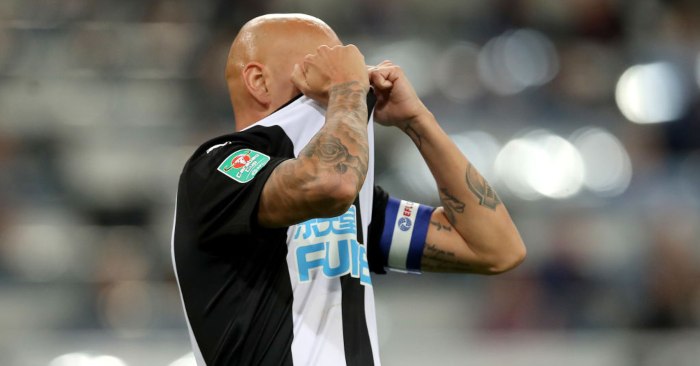 With Craven Cottage basking in mid-May sunshine for Fulham’s final 90 minutes of a dismal campaign back in the Premier League, Jonjo Shelvey nonchalantly brought down Matt Ritchie’s out-swinging corner and stroked a half-volley beyond the reach of Sergio Rico. A familiar feeling for Fulham fans: the 16th home game out of 19 in which they had conceded a goal. An unfamiliar one for Shelvey: his first goal of the season on the final day.

The last time Shelvey netted for Newcastle was almost a year before, on April 7, 2018, when calls for the midfielder to receive a call-up to Gareth Southgate’s World Cup squad were gathering momentum. A handful of strong performances at the back end of the season was not quite enough to earn Shelvey one of the remaining spots in Southgate’s 23-man squad. Many would argue it’s a theme symptomatic of Shelvey’s career to date. No doubt a talented player but blessed with neither the consistency nor application to stand out at the highest level.

Rafa Benitez, who worked with Shelvey for the best part of three years and joined shortly after the midfielder signed from Swansea on a £70,000-per-week salary, would testify to his underwhelming creative output. What many Newcastle supporters would perceive as a disappointing return on goals and assists wasn’t and still isn’t offset by effort and endeavour.

Shelvey was an instrumental part of the Newcastle squad which made an instant return to the Premier League in 2016/17, but the Championship does not provide the same calibre of defensive organisation from teams looking to deploy a low block. Shelvey’s impressive return of eight goals and five assists in the promotion-winning campaign has been followed by just three goals and four assists since August 2017.

Although Shelvey is capable of a defence-splitting pass, too often he picks up possession from a deep-lying central area and looks for the Hollywood ball into the final third. With Newcastle having precious little possession, both under Benitez and more recently under Steve Bruce, the Spaniard tended to favour a midfield axis of Isaac Hayden and Mohamed Diamé. Both players could break things up and spring a counter-attack with a short incisive pass.

Coming into the 2018/19 campaign, Benitez deemed Shelvey fifth choice in the club’s midfield pecking order, behind both Ki Sung-Yeung and youngster Sean Longstaff as well as Hayden and Diamé. Whilst a recurring thigh injury hampered the first half of his season, the playmaker often became surplus to requirements post-Christmas. It’s no coincidence that Newcastle’s remarkable upturn in form between January and May saw Shelvey make just two starts and four appearances from the subs’ bench.

The signing of Miguel Almiron prompted a switch to a less constrained, more attacking style of football which Shelvey simply lacked the fitness to play. He seemed a dispensable luxury in a rigorously drilled and formulaic Benitez side, especially with his tendency to pick up cheap bookings.

But it was hoped that Bruce’s man-management skills and personable approach would bring out the best in him this season. When Shelvey described Bruce’s arrival as “a breath of fresh air” during the club’s pre-season tour of China, both he and Newcastle fans were hoping that this campaign would provide a new chapter for him to rediscover the form which can make him unplayable.

However, even for Bruce, his lack of mobility has become an increasing concern. After being dropped a few weeks ago for Newcastle’s surprise 1-0 away win at Spurs, Shelvey’s displays since – against Liverpool and Brighton respectively – have been largely anonymous. Things seemed to boil over in the goalless draw with Brighton as Shelvey appeared to question Bruce mid-game in an all-too public display of frustration. Bruce, bemused as anyone inside St James’, couldn’t make out what Shelvey was complaining about.

The noises coming out of the Newcastle camp this week are that he will be dropped by Bruce for the trip to Leicester on Sunday – along with Almiron. Hayden, who produced a steady display against Brighton, looks set to retain his place and it is expected that Ki will be a like-for-like swap with Shelvey.

The glass-half-full Newcastle supporter will point to the goal which Shelvey created for himself in the defeat at Norwich – a brilliant shimmy followed by a curved effort into the far corner beyond ex-Magpie goalkeeper Tim Krul. But realists will know that these fleeting moments of magic are increasingly few and far between.

Whether he has burnt his bridges on Tyneside remains to be seen, but judging by the early weeks of this season, Shelvey may have run his last Newcastle race and fallen flat on his face.