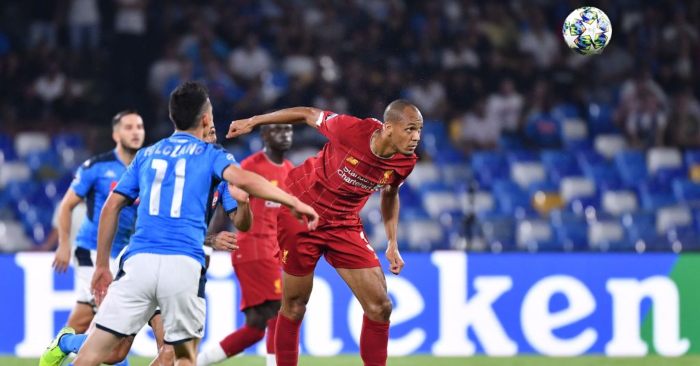 This week is the anniversary of Fabinho featuring at No.1 in our list of summer signings who already looked a bit pointless. We did extensively caveat his inclusion – we had been badly burnt by Andrew Robertson – but at that juncture he had not played a single minute in the Premier League. He was holding hands with Fred at the top of that list and their fortunes then appeared to be running parallel; a year later, they have undeniably diverged. While Fred remains a spare part in Manchester, Fabinho is fast becoming the glue that binds Liverpool.

“He came from another league, a completely different system and we have a good team together so that takes time, but the plan is still he will make us better so, from my point of view, it’s all fine. I know the situation is not like people expected. I can’t change that,” said Jurgen Klopp. We kind of believed him, but wondered how Fabinho could possibly improve a Liverpool side that had won their first five Premier League games. It turns out that he could. He has. He does. After being physically strengthened and tactically brainwashed at Melwood, Fabinho emerged as a player ready to contribute to an astonishing season. And contribution has since become domination; Klopp will not repeat January’s mistake of fielding a Fabinho-less midfield against Manchester City.

Against Napoli on Tuesday night, he was nothing short of immense. This was a masterclass, Fabinho calmly playing chess when all around him seemed determined to enjoy an error-strewn game of basketball. He was precise in the pass (he misplaced just one in a faultless first half) and impeccable in the tackle, with his appetite for the press seemingly insatiable. But this is exactly what we have come to expect from the Brazilian, who has transformed the weakest, stodgiest element of this Liverpool side.

In the absence or displacement of N’Golo Kante and Fernandinho, Gary Neville sees Fabinho as the Premier League’s finest defensive midfielder, a compliment we could not possibly have forecast a year ago. “Fabinho at the moment is the best,” he said this week. “He steps up the pitch and wins the ball. And most importantly he doesn’t just pass it sideways to the centre-backs; he plays vertically.”

Had every Liverpool player shared Fabinho’s level of concentration and attention to detail in Naples, Liverpool would have returned home with at least a point. But others were sloppy, others were wasteful and then others were downright negligent as the defence was first impeccable and then ultimately responsible for a late collapse that allowed Napoli to score twice in the final ten minutes. Castigating either Virgil van Dijk or even VAR is pointless as this was not a performance anywhere near as poor as the one we saw last October; Liverpool’s chances of retaining the Champions League trophy will not pivot on a couple of mistakes in the first and toughest group game.

There should be no real inquest and certainly no blame attached to either Adrian – who pulled off one extraordinary save – or Fabinho, who barely misplaced a pass, barely mistimed a tackle and produced the raking ball of the game. Vertically.