Is this the season that the status quo of British football management changed? If so, praise be... 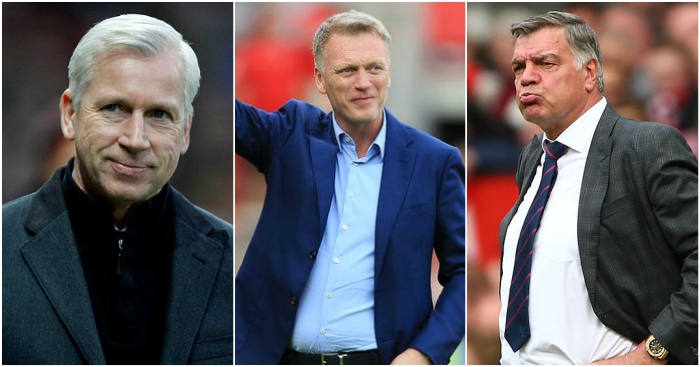 Between August and January, 16 British coaches were sacked by clubs in the Premier League and Football League. By April, nine of those were already back in work within English football’s top five leagues. The fair is in town, and the sound of the merry-go-round is being carried on the breeze.

You can make a pleasing chain of these British managers just by running through the recent history of a few clubs: Pardew leaves Palace for West Brom, who have just sacked Pulis. Pulis joins Middlesbrough, who have sacked Garry Monk. Monk joins Birmingham City, who have recently sacked Harry Redknapp.

Let’s go again: Roy Hodgson left Fulham, and they replaced him with Mark Hughes. Hughes was sacked and joined QPR, who were replacing Neil Warnock. Then QPR sacked Hughes, who went to Stoke City to replace Pulis, and then appointed Redknapp. It’s probably only a coincidence that both of these daisy chains of mediocrity end with Redknapp. Probably.

That’s the end of the games; time for another fact: There have been 15 mid-season managerial appointments in the Premier League since the beginning of 2016/17. Ten of those 15 have been British managers aged 45 and over. If there is a managerial merry-go-round, one strata of the industry has its own queue-jump tickets.

At this point, it’s worth remembering the words of Allardyce to Richard Keys, whose confusing rhetoric of ‘more jobs for domestic candidates’ does not seem to extend to television presenting and punditry gigs in Qatar.

“I think you are almost deemed as second class because it is your country,” said Allardyce. “It is a real shame that we are highly educated, highly talented coaches now with nowhere to go. The Premier League is the foreign league in England now.” If British coaches are indeed an endangered species, so too are dogs, sheep and cows.

Yet if the quantity of these British managers is high, what of the quality? Pardew has been sacked by West Brom after a record-breaking run of woe. Allardyce has lost what goodwill he had at Goodison through meagre results and miserable aesthetic fare. Hughes inspired Southampton’s worst performance of the season in his first game in charge. Paul Lambert has made Stoke worse in attack and little better in defence. David Moyes may well keep West Ham up as the tallest dwarf, but 24 points from 20 league games hardly merits a victory parade.

There are British managers achieving excellence – Sean Dyche, Chris Hughton and Eddie Howe are three. But each of those have been permitted to build a project within a club that had no expectation of Premier League consolidation. The others are firefighters, not project managers. Right now, you wouldn’t trust them to rescue a cat from a tree.

This is as much a question of young vs old as British vs foreign, or perhaps even football Establishment vs football proletariat. Arsene Wenger last week accused those demanding his departure from Arsenal of ‘age discrimination’, but English football is closer to comfortable care home than Dignitas clinic.

Fourteen of the 92 English league managers are aged under 40, compared to 18 aged 55 or over. In the Premier League, there have been only six managers under the age of 40 in the last decade, compared with five amongst the Bundesliga’s 18 clubs right now. Half of those six Premier League managers were forced to achieve promotion to gain their status. The three exceptions in full: Garry Monk, Marco Silva, Andre Villas-Boas.

This is not a question of opportunity. Thirty-six of the 92 English league clubs have changed their manager in the last six months, an astonishing number. Thirty-six openings for young coaches to get a chance. Yet in the top two divisions, there is precious little progress. That’s exacerbated by a lack of promotion through the divisions. Owners are predisposed to mistrust lower-league success.

The argument against comes in the form of the five exceptions to the mid-season Premier League Brit-athon over the last two seasons. Those other five appointments: Marco Silva (qualified success), Claude Puel (success), Javi Gracia (too early to tell but closer to success than failure), Bob Bradley (failure) and Carlos Carvalhal (success). Add young coaches being promoted through the leagues to this crop, and you finally have a healthy coaching environment.

It is dangerous to predict that anything will improve quickly or improve at all, given the insularity and dogmatism that still pervades English football. I might be here in exactly 12 months’ time, singing from the same hymn sheet to another set of empty pews.

But there is also reason to believe that change, finally, might come. If the progress achieved by young managers in lower leagues has not altered the mindset of Premier League decision-makers, extreme underperformance by their tried and trusted might. Having been indoctrinated to believe that experience, even experience of failure, is better than inexperience, doubts are surely creeping in.

It is the cliche that defines English football’s in-built insularity: ‘Be careful what you wish for.’ Fear change, fear difference, fear new ideas.

Yet 2017/18 could go down as the Premier League campaign that turned the status quo on its head, where it was finally better the devil you didn’t know quite so well. If that does indeed force a change in the Establishment of British football management, then praise be.