Well. A pulsating, enthralling match in which Arsenal finally had the last word. Is that a mood-changer? 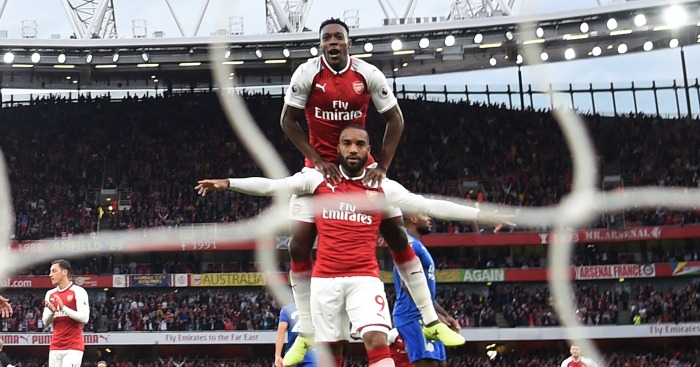 Missed it, haven’t you? The Premier League’s reputation as ‘the best league in the world’ will continue to be open to tedious debate, but there is nothing quite like the mania of an English football match in full thunder. At times this felt like that stage show production of William Shakespeare’s 37 plays condensed into 97 minutes. By 9.40pm, namesake Craig was witnessing the tragedy.

Two goals in the first ten minutes, two more in the last ten. If that gives the impression that the action was skewed towards both ends of the game, the 70 minutes in between were the type of raucous fun that makes the summer wait worthwhile. The transfer sagas can be pushed into the shadows; real football is back.

It was the Daily Mirror’s John Cross who tweeted before the game that he was pleasantly surprised by the lack of ‘Wenger Out’ scarves on the way to the Emirates Stadium. For most of the first half, that felt like tempting fate. Had Cross or anyone else in the stadium left after 43 minutes of the first half, they might have been able to pick up a good deal. Had they done the same after 36 minutes of the second, they could have opened a stall.

There are valid doubts about Arsenal despite their second opening day win in eight years, of course. Having blamed the uncertainty over his own future for Arsenal’s frustrations last season, Wenger selflessly signed a new two-year contract in June in order to eliminate those ‘eternal’ uncertainties. There will be few at the Emirates Stadium who were astonished that one sweep of the club-branded fountain pen did not solve Arsenal’s problems.

Alexandre Lacazette may have settled nerves and lifted the mood with the joint quickest goal of any Premier League season, but attacking endeavour has rarely been Arsenal’s problem. By the time Shinji Okazaki and Jamie Vardy had been allowed unforgivable space in the penalty area to give Leicester the lead, groans rang around the Emirates and 2016/17 felt an awfully short time ago. A defence organised by Steve Bould still fails to grasp the importance of tracking runners and staying touch-tight on corners.

One of the reasons for Arsenal optimism was their late-season switch to a three-man defence, but at times on Friday night a much-vaunted formation looked woefully unfit for purpose. Holding was asked to play as the passing central defender stepping out from the back, and struggled. Granit Xhaka was asked to be the passing pivot in front of the defence, and set up Leicester’s second goal. The Swiss midfielder owes his club a vast improvement on last season’s performance level. Things can only get better.

And yet better they did. Wenger’s ineffective substitutions last season earned him censure from his own supporters, but the introduction of Aaron Ramsey and Olivier Giroud transformed the game, the pair scoring the equaliser and winner. Shakespeare’s decision to bring off a central midfielder in Matty James and give striker Kelechi Iheanacho his debut looked dim in hindsight.

It is impossible to overstate the difference between defeat and victory for Arsenal. As the camera panned to a seemingly disinterested Alexis Sanchez when the home side were trailing, rival supporters will have delighted in this unfurling, evolving calamity. As Giroud fell to the ground and was mobbed by adoring teammates and applauded by adoring supporters, an entire mood changed. The sweetest triumph is the one earned after staring disaster square in the face. Arsenal are flawed, but weren’t floored.