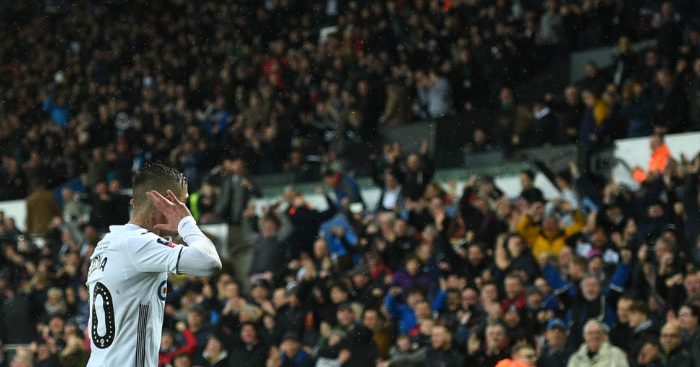 So close, and yet so far. Manchester City’s late winner inevitably means Swansea City will feel the greater distance more profoundly this evening, but tomorrow morning, once the immediate sting of agony has dissipated, they will hopefully be able to take some comfort in the first two words of that aphorism. Forget the result; that was a performance to be proud of.

This game shows that ultimately, for all we mythologise our clubs’ histories, when the whistle blows to start the game, it is all about where you are now. Forget Swansea’s recent years in the Premier League. Forget their 2013 League Cup win. Forget that Swansea are mid-table Championship side, and forget their recent defeats to West Brom, Norwich, Sheffield Wednesday and Leeds.

This evening, for 58 minutes, Swansea City’s players were a squad of heroes, leading the reigning, defending, and leading Premier League champions. Forget that the visitors had just won a Champions League knockout game 7-0 and have lost just once since Boxing Day.

And they deserved it. Cameron Carter-Vickers threw himself in front of everything; Kristoffer Nordfeldt saved with his head and his wrists and his feet; Wayne Routledge provided experience and direction; Daniel James and Bersant Celina offered thrust and pace and impetus, and, in the latter case, a beautifully-struck goal against his former club: forget Wednesday night’s embarrassing slip as he ran up to take a penalty.

In every area of the pitch, Swansea had men doing their jobs properly and enjoying the challenge. The sight of Connor Roberts trotting away from a minor altercation with Oleksandr Zinchenko, laughing his little tits off, was wonderful. Forget that Manchester City’s starting lineup contained eight players who went to last summer’s World Cup; Swansea were winning and they were loving it.

Difficult though it may be, try to to forget, too, about the absence of VAR, regardless of how ludicrous it may be that it is used in some games and not others, or that both Manchester City’s penalty and winning goal would almost certainly have been ruled out had the video referees been present in south Wales. It affected the result, but not the quality of Swansea’s performance, or the pride their fans should have in their side.

After all, games and performances like that are why so many of us have fallen in love with football in the first place. The reason we love underdogs is because we all want to believe that we stand a chance even when we’re up against talented geniuses; that hard work will allow us to have our day, at least once in a while. We want to forget that the world often doesn’t work that way, and for 58 minutes, Swansea allowed us to do that.

Ultimately, regardless of whether the penalty should have been awarded or the winner should have been allowed to stand, Manchester City recovered well enough late in the game to deserve their victory, as one might expect. But in games like this, we can forget about the idea that there can only be one winner, and that where there is a winner there must be a loser. There were no losers here tonight.