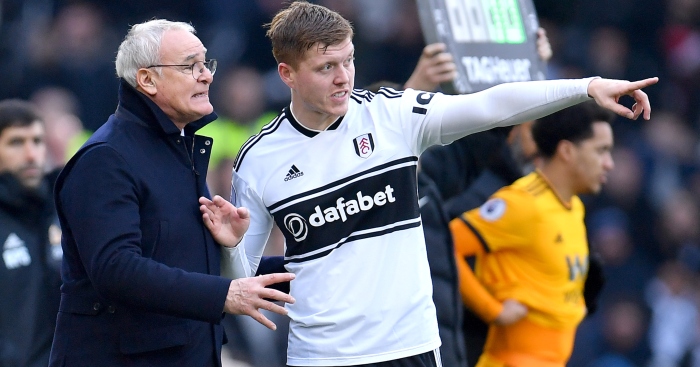 Fulham moved off the bottom of the Premier League table for the first time since Claudio Ranieri arrived at Craven Cottage and, after emphasising the importance of not losing on Boxing Day, the Cottagers granted their manager that Christmas wish. But the 1-1 draw with Wolves still felt like a defeat in the baubles.

Today’s disappointment, though, unlike so many that have gone before is a sign of further progress at Fulham under Ranieri. Only three Premier League sides to sit at the foot of the table when the turkeys are cooked on Christmas Day have survived and though hope was in short supply around Ranieri’s appointment, the veteran boss has provided reasons for optimism as the Cottagers enter the New Year.

Their greatest encouragement? Fulham’s defence no longer looks like crumbling at the first whiff of danger.

Ranieri’s rearguard, statistically, remains the ropiest in Europe’s top five leagues. Under Slavisa Jokanovic, they conceded 2.58 goals per game, a pattern of form that would see them ship just two short of 100 had it continued for the remainder of the season. Ranieri has halved that amount during his seven games in charge, though the improvement was by no means immediate.

It took until Saturday, Fulham’s 18th game of the Premier League season and their sixth under new management, before Ranieri could tease a clean sheet from his men. That came against Newcastle’s blunt attack in a game already forgotten by anyone unlucky enough to witness it, but in face of Wolves’ threat, the Cottagers again offered a more robust defence of their goal and appeared good value for consecutive shut-outs until Romain Saiss bundled home his first Premier League goal with Fulham only five minutes from victory.

Ranieri switched to a three-man defence at Newcastle and the early results of his experiment appear most encouraging. Tim Ream, Alfie Mawson and Denis Odoi combined to deny Newcastle a single shot on target at St James’ Park last weekend, while Wolves made Sergio Rico dirty his gloves only four times today.

Regardless of whoever makes up Ranieri’s defence, and whatever shape they form, Fulham’s midfield is making a better fist of protecting them. And Jokanovic should take some of the credit for that.

During his final game in charge, the 2-0 defeat at Liverpool, the former boss removed Calum Chambers from the defence, where he was having no more joy than anyone else, and shifted him into a holding midfield role. He has remained there ever since, missing only one match – the 4-1 defeat at Old Trafford when Ranieri could not explain his side’s lack of effort and application in the absence of the Arsenal loanee.

Andre-Frank Zambo Anguissa has not been seen since that woeful defeat to Jose Mourinho’s side due to a combination of suspension and injury but the Fulham record signing will have a hard time winning back his place, especially since Jean Michael Seri appears to be belatedly finding his feet amid the hustle and bustle of the Premier League. Ranieri suggested Fulham fans should wait six months before judging the former Barcelona target, and his the manager’s patience once more appears to be paying.

Ranieri’s midfield most certainly has a different focus to Jokanovic’s engine room. Fulham passed their way to promotion last season and the former manager was steadfast in his determination not to alter that approach too greatly. In seven of Jokanovic’s 12 games in charge, Fulham had more possession than their opponent. They lost four of those matches, conceding 15 goals along the way.

Especially against Wolves, whose counter-attacking threat Ranieri was most wary of, the new manager has taken the approach that the opposition cannot break if Fulham don’t have possession to turn over. The hosts had less than 30 per cent of the possession against Nuno’s side, in keeping with the other games during Ranieri’s brief reign so far. Not once in seven games have they had a greater share of the ball than their opponent.

Luckily for Ranieri, he has a centre-forward who will graft to make the best of every sniff of the ball he gets. Aleksandar Mitrovic has scored only two goals in the last three months – both of those came in Ranieri’s first game in charge – but there is little concern around the Serbian’s form. The striker has had more shots than anyone else in the Premier League, with only Mo Salah and Harry Kane working the goalkeeper more often, though 12 strikers have had more big chances than Mitrovic, who has scored seven of the nine that have been created for him.

In the first half, Mitrovic bullied Wolves. He was desperately unlucky not to open the scoring with one chance he mustered for himself after leaving three defenders in his wake, and though the visitors did a better job at cutting off his supply line after the break, only a last-ditch, 90th-minute goal-line clearance denied the Fulham forward the winning goal after he had again taken on the Wolves defence single-handedly.

There is little doubt that the goals will come for Mitrovic, but you could say that with absolute certainty about any of Fulham opponents – until recently. The hugely-important visit of hapless Huddersfield offers another timely opportunity for the Cottagers’ defence to convince us all of their new-found resilience, which could take them out of the bottom three by Saturday night.