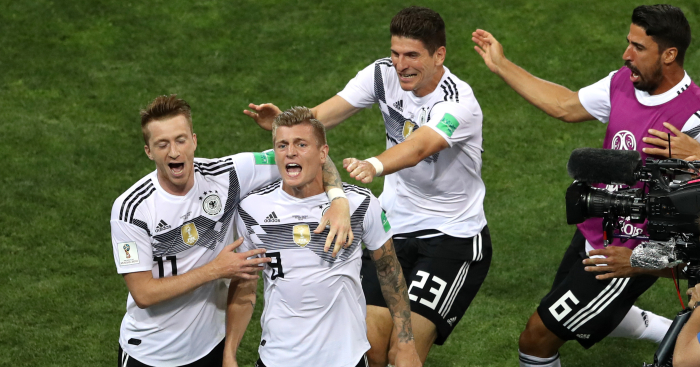 There was never a night or a problem that could defeat sunrise or hope.

What is the tagline of their sponsor again? Ah yes, Impossible Is Nothing. Perhaps we have all been played for gullible fools.

Four times in succession, a European winner of the World Cup has been humbled in the group stage. For 16 of the 96 minutes played, Germany were out. For 78 minutes, their fate was out of their hands. For two minutes, they were alive again.

In the warm air of a Sochi night, supporters of this once-great and maybe-still-great team had given up. They looked on with open mouths and wide eyes, as if trying absorb more of such an unbelievable situation and persuade their senses that what was happening was real.

And then, with a thousand different alarms bells ringing in each ear, Toni Kroos changed the present and the future with one majestic sweep of his right boot. In a sense, it now matters not what has happened, only what is coming. Beat South Korea in their final match, and Germany will march on.

This World Cup has had two distinct moments of professional greatness, two moments when football was stripped down to man vs ball vs goalkeeper. When Cristiano Ronaldo struck his free-kick against Spain, it guaranteed Portugal a point. Kroos did the same, but from a tighter angle and with heavier legs and against a goalkeeper who knew where the shot was going and with more pressure piled upon him by the sheer enormity of the situation. Never mind a point or three, it guaranteed his team their World Cup oxygen.

Quite how long the effects of this minor-miracle last depends on Loew’s side improving, and quickly. If it is distinctly un-Germanic to commit so many obvious tactical and technical gaffes as they did against Mexico, it is quite another for the same errors to occur twice in succession. Sami Khedira was left out but this time Kroos was left exposed in midfield, while Jerome Boateng played the Mats Hummels role of centre-back charging out like a fireman who has slept through his alarm. Boateng’s red card was less of a punishment and more of a mercy killing.

Again, Loew’s response to adversity was simply to throw more and more men forward. He ended with a 1-4-4 formation, and only Sweden’s lack of pacy counter attackers and sudden self-awareness of the magnitude of their potential achievement made Germany’s extraordinary late salvo possible.

Think too of the vanquished side, so hard to do even when Swedish bodies were lay strewn on the turf as if beaten in literal battle. Janne Andersson’s team outfought and out thought Germany for vast periods, though could never hope to outplay them. They were defiant in defence, but undone by one moment of foolish ill-discipline and one more of true magnificence.

This could still be a seismic German failure, then. For all the calamity surrounding Argentina, it barely registers against the shockwaves caused by Germany’s so-far lifeless defence of their crown. This is not a team built around one player or one coach. Neither is it an ageing squad nor one light on experience. Only three of the 23-man squad are over 30, but seven have more than 70 caps. Every one of those has a World Cup winner’s medal. Even if you did not pick Germany as your likely winner, and many did, nobody foresaw this.

There are great rumblings of discontent behind the scenes, laid bare in the tactical naivety of the team and decision-making of the individuals. Hummels was critical of tactics post-Mexico, but more tellingly said that the flaws had long been known to many within the squad. That does not speak of joined-up thinking or a happy tour party. They have not kept a clean sheet in seven matches.

But even if this title defence is to end in agony, you would rather agony was extended than administered in one heavy dose, prolonged until the final moment.  Germany are favourites to reach the knockout stages. Once there, Sochi panic may feel like a world away.

A team that made their dream seem unfeasible through defensive incompetence and attacking impotence somehow found a way. If winning while playing badly is a sign of a good team, Germany will win this and every other World Cup. And if legacies are decided partly by performance in the clutch moments, you can commission the Kroos statue now.