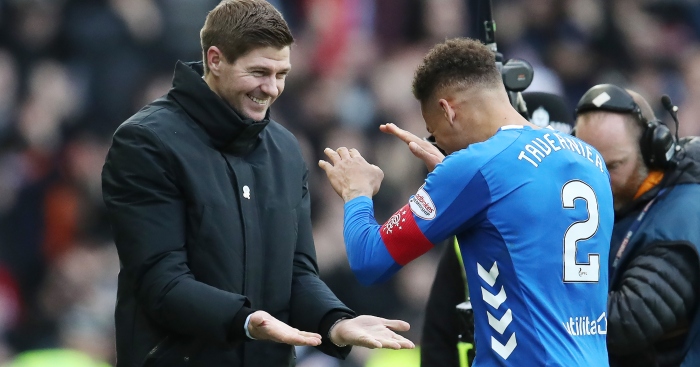 Brendan Rodgers probably still suffers flashbacks whenever he hears that Steven Gerrard has been issuing rallying calls and Rangers gave the Celtic manager more reason to shudder after satisfying the rookie manager’s request for ‘one last push’ in the Old Firm Derby.

Gerrard demanded that his Gers bring their ‘A game’ to a meeting that had the feel of a six-pointer for the hosts at Ibrox. Derby defeat, another one, would have left Rangers choking on the Bhoys’ dust while Rodgers and his players swanned off to the sunshine with a six-point lead at SPL summit. Instead, Gerrard’s men aced their second Old Firm test of the season to suggest that a title scrap may be waiting for the champions when they return to Glasgow in January.

You coukd be forgiven for thinking that fight had already been won if the celebrations at Ibrox were taken as an indicator. But Rangers thoroughly deserved this New Year party after recording a hugely-significant 1-0 victory.

Ryan Jack’s first goal for Rangers gave his club their first league derby win since their financial crash of 2012, a triumph which ends a run of 11 without a victory. Since Rangers edged the 2016 Scottish Cup final on penalties, Celtic have won the subsequent meetings 30-6 on aggregate.

But this weekend, and for the winter break, Glasgow is blue again after Gerrard squeezed every last drop of effort and intensity from his players in their 38th competitive match of the first half of the season.

The slender margin of victory in no way reflects Rangers’ dominance of their neighbours at Ibrox. After the sixth minute, Rodgers’ side could not muster a shot on target, with Andy Halliday putting his balls on the line – literally – to deny Olivier Ntcham in the late stages on the only occasion the home defence was really flustered.

Halliday set the tone for the Rangers performance in the first minute in his first clash Ntcham. The stand-in left-back sprinted 20 yards to thunder in with a sliding challenge to win a loose ball near the halfway line. It gave Celtic a throw but Rangers the momentum and his reaction to this small early victory suggested Halliday sensed it represented something bigger.

Halliday, Gerrard’s ‘unofficial captain’, was followed into battle by each one of his Rangers team-mates. Scott Arfield, ably assisted by Jack and Ross McCrorie, was similarly imperious in midfield, wiping the smirk off Scott Brown’s face by comprehensively winning their one-on-one clash. As tends to be the case, Celtic followed their skipper’s example, surrendering in every single individual battle across the pitch.

Give Brendan Rodgers his 1st Old Firm defeat as Celtic manager, in his 13th game (all comps)

Only Craig Gordon and perhaps Callum McGregor could reflect with any satisfaction upon their afternoon’s work. Young centre-forward Mikey Johnston, a 19-year-old winger filling in up front, will get a pass too after being left utterly stranded by his team-mates’ uncharacteristic sloppiness in possession.

In contrast, his opposite number, Alfredo Morelos was involved in everything. The 20-goal striker has yet to notch against Celtic and his appetite for a scrap too often manifests itself in an unhelpful manner for Rangers. But on this occasion, he perfected the perfect blend of sh*thousery, staying just on the right side of ref John Beaton while proving a major irritant for the visitors defence.

Much of Morelos’s best work was done off the ball. Gerrard identified Celtic’s strength in building from the back as a potential weakness and Rangers’ Colombian centre-forward ratted after Rodgers’ rearguard with infectious determination. At no point were Celtic allowed any comfort in possession and in their urgency to shift the ball, so often they simply gave it up.

The Bhoys were a step slower than their hosts all afternoon and the decisive moment in the 37th-minute summed up the affair as a whole. Ryan Kent, Liverpool’s on-loan winger, carried more quality than anyone other player in possession and another of his penetrative runs off the touchline had Mikael Lustig backing off into the box, looking for cover. When it never came, Kent left Lustig for dead on the byline before surveying a plethora of options. He picked the right one, laying the ball off rather than crashing it across goal, with Jack taking the delicate care over his finish that you would expect of a player still looking for his first goal. Brown was in position to block but this time, the Celtic skipper was too slow in shifting his feet, with the ball taking a nick off his heel to deceive his own keeper.  Jack’s get the goal but in the eyes of joyous home fans, Brown will get the credit.

Does that goal and this win indicate a power shift in Glasgow? Absolutely not. But it suggests that Rangers are capable of achieving the levels required to facilitate one. Gerrard will look to recruit in January, with a lock-picker in midfield and some attacking cover perhaps his priority to supplement the 15 signings he made during his first summer at Ibrox. With some smart business in addition to discovering the formula for consistency, Gerrard might just another title race to run.