Home F365 Says F365 Says: Give Greenwood more chances to back up the hype 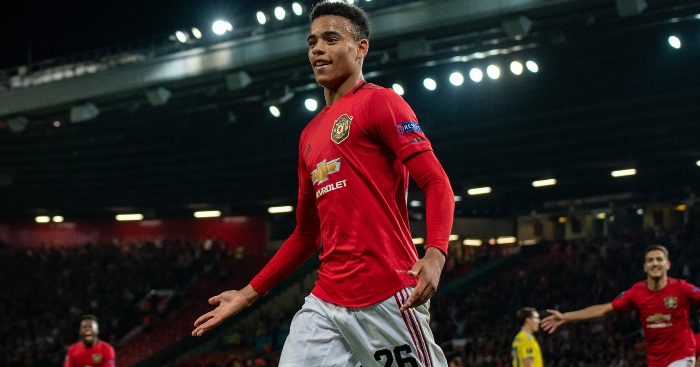 Ok, Ole. The ban is lifted…

We've got a new rule for you Ole. You are not allowed to describe Mason Greenwood as United's "most natural finisher" again until he actually scores a goal…https://t.co/YfE0uFUZy4

Mason Greenwood picked an opportune time to prove the Manchester United boss right in his assertion that the 17-year-old is the club’s most natural finisher. Even more so than Marcus Rashford and Anthony Martial: “Mason’s more of a natural finisher than them two,” added Solskjaer before the visit of Astana.

It’s lucky for United that Greenwood possesses that quality but no one else in United’s ranks had it during their Europa League opener. The Red Devils peppered the Kazakhs with 20 shots but only Greenwood’s 73rd-minute strike outwitted Eric in the Astana goal.

This was Greenwood’s night. Everyone at Old Trafford bar 200 or so hardy souls from Kazakhstan came to see the 17-year-old on his first senior start as well as cameo roles for Tatith Chong and Angel Gomes.

Chong on the left and Gomes behind Rashford toiled while Astana defended deep and narrow, with Solskjaer reverting to experience as time whittled away. Jesse Lingard and Juan Mata replaced the young pair for the final quarter of the game – but Greenwood remained on the pitch, reinforcing his status as top of the crop.

The England Under-21 forward rewarded Solskjaer for his faith with a goal that highlighted one of his greatest assets. Few can tell which foot Greenwood prefers – certainly not those among the gutsy Astana defence – and after faking to shoot with the left, the United prospect shifted it on to his right before rolling the ball through Eric’s legs.

It was a finish that showcased the composure, imagination and ruthlessness that has drawn comparisons with Robin van Persie. Normally such talk would be suppressed from within at Old Trafford, but Solskjaer’s bullishness over Greenwood’s class is shared throughout the club. The talk is of not of potential, rather the closest thing to a dead-cert seen in those parts since Ryan Giggs.

Solskjaer’s willingness to talk up Greenwood’s emergence should serve as a warning to Martial and Rashford, the last player to explode through the ranks. United’s No.9 and No.10 both see themselves as the club’s best centre-forward, but neither have yet demonstrated the one-eyed, ruthlessness in front of goal.

Rashford’s inconsistency helped give Greenwood the platform to be the match-winner. Leading the line in Martial’s continued absence, the England striker had a quarter of United’s 20 attempts but in the first half especially, his final touch lacked the necessary quality. Rashford looks so close to becoming a complete forward – but he seems no closer to taking that final step.

Rashford may have to make do with a wide role if upon his return Martial demonstrates the appetite for goals that no one is yet certain he possesses. Solskjaer seems to have Greenwood earmarked for a similar job while he eases the teenager into regular first-team duty, just as Rashford was. But 175 first-team appearances after he burst on the scene, also in the Europa League, has Rashford’s versatility cost him?

The dream scenario for United fans is a team with Rashford and Greenwood both scoring goals. Solskjaer appears to believe he can make it a reality, bit that will only happen if Greenwood is given the regular opportunities to build on the foundation he laid tonight.