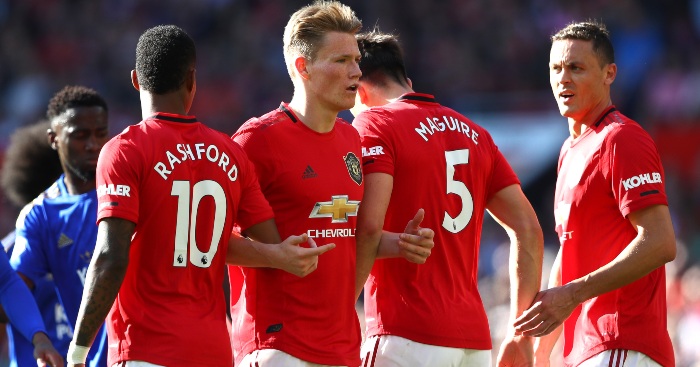 A scruffy, single-goal Old Trafford victory over Leicester earned with an early penalty is not likely to go down as the most memorable moment of Manchester United’s season. In years gone by, it may have been seen as an underwhelming outcome, but the parameters around United have shifted. This was a significant result. Now Ole Gunnar Solskjaer needs to ensure it becomes a turning point.

United’s second victory of the season came against the side widely tipped to take their place in the top six should they slip further as many believe they might. Leicester turned up at Old Trafford, perhaps not as favourites, but heavily fancied to inflict further misery on the Red Devils following a defeat to Crystal Palace and leads let slip to Wolves and Southampton. For Solskjaer, this was perhaps the worst possible assignment at the most inconvenient time.

The United boss would probably feel compelled to dispute the first part of that statement but he would surely endorse the second. The Red Devils have drawn seven of their last 10 matches after international breaks and even on those occasions, Solskjaer nor Jose Mourinho are not likely to have been so depleted in resources as the hosts were today. United’s squad already looks thin in some patches and threadbare in others, so the visit of a full-strength, buoyant Leicester side in the absence of Paul Pogba, Luke Shaw and Anthony Martial is not a prospect that Solskjaer will have relished.

But Solskjaer saw a side to his team today that many doubted they had. It was not a thrilling display by any measure – “Let’s not kid ourselves that it was a great performance,” admitted the manager – nor a victory that they can claim puts Leicester firmly in their place. However, the resilience and grit United showed to eke out the victory may offer more reassurance than a swashbuckling exhibition that we know they are capable of on the rare occasion they fancy it.

It was thought that this would be a match won in midfield and United’s featured a relative rookie who some confused with a competition winner not too long ago and a veteran who many believe is no longer up to the job. They were tasked with stopping one of the Premier League’s most dynamic and creative midfields, featuring a couple of players – Youri Tielemans and James Maddison – who would have been regarded as significant upgrades if United had signed either in the summer.

But Scott McTominay maintained his recent habit of proving his doubters wrong by winning that midfield battle and consequently the game for United. The young Scot didn’t get a great deal of help from a rusty-looking Nemanja Matic but McTominay took it upon himself not only to deprive Tielemans, Maddison and Hamza Choudhury of the time and space to penetrate United’s defence, he also set the tone with his own passing from deep.

A battling display from @McTominay10 earns him our Man of the Match award! 👏 pic.twitter.com/bo0p39ijth

In a team that is said to lack leaders, McTominay is emerging as one. Even some on the inside at Old Trafford saw Mourinho’s faith in the academy graduate as misplaced but the former manager deserves credit for seeing in the midfielder what many missed. We know the Old Trafford bar is at its lowest setting when simple effort and industry stands out in the way McTominay’s often does, but the 22-year-old’s use of the ball is more impressive with each passing week.

The purchase of Harry Maguire has also gone some way to filling the leadership void in the United dressing room. The England centre-back has taken to Old Trafford life like a square-headed duck to water and today he shackled his old mate Jamie Vardy. A second clean sheet in 20 matches – which Victor Lindelof also played a major role in earning – may be the most pleasing element of the victory for Solskjaer.

Though he may take most pleasure from the source of the only goal. So much has been made of United’s spot-kick shenanigans this season, with two missed attempts costing points and their laissez-faire approach to delegating responsibility provoking plenty of criticism. The Red Devils have been awarded 40 per cent of the penalties handed out in the Premier League this term and another wasted opportunity coming so early on would have set a dark tone on a sunny afternoon at Old Trafford.

But Marcus Rashford seized his chance to score his third goal of the season and quiten – for now – the criticism with a calm, perfectly-taken spot-kick which he won himself by harassing Caglar Soyuncu into a mistake.

Up to that point, Soyuncu’s form this season has made many question whether Leicester miss Maguire at all but that decisive moment summed the Foxes up. They came to Old Trafford intent on making statement but upon being given the floor, Rodgers’ men appeared strangely subdued.

Solskjaer will point to United’s industry and organisation as the cause of that but for Leicester, their first defeat of the season represents a missed opportunity. Instead it was United who made their point. Solskjaer has to see to it that they don’t contradict themselves again in the coming weeks.