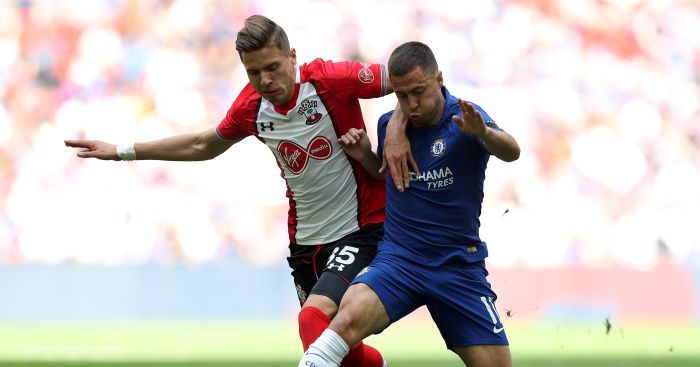 Is there any better manager at guiding their team to an ungainly 2-0 defeat than Mark Hughes? Is there anyone quite like Hughesy at setting up a team to sit back against a far better attack than their defence, only to finally tell them to attack when they have inevitably gone behind?

There is no shame in Southampton losing to Chelsea. Antonio Conte manages a better team of better players than Hughes. But there are also ways of going about these things, giving it a go even. Southampton’s special brand of passivity has been haunting them all season.

Chelsea did not commit a single foul in the first half, the perfect indication of the intensity that was required in order to gain the upper hand. They were rampant in the opening 20 minutes, before a slight lull before the break. But playing in third gear shouldn’t be sufficient to fly past your opponent in the slow lane.

Within four minutes of the second-half beginning, Olivier Giroud had danced his way through the penalty area like a burglar tip-toeing down a corridor and Chelsea had their lead. Bar a five-minute period of Southampton pressure, abruptly ended by a second Chelsea goal, this was a semi-final handed to their opponents.

If a team cannot be trusted to be expansive, it must at least be durable and resilient.Southampton are neither. Looking through the teamsheet was to peruse a list of the stagnated and ungainly. If Dusan Tadic and Nathan Redmond represent the first camp, Shane Long is the poster boy of the second. His goalscoring record is wretched, but his first touch went sent through on Willy Caballero was worse.

If the idea is that a team in trouble can use the cup competitions to take their mind off league form, Southampton didn’t get the memo. This is still the same manager of the same team that has taken three points from their last eight Premier League matches. When the going got tough, Southampton got…even more lethargic.

Hughes’ side still have a fair shot at survival, absurdly. Beat Bournemouth at home next Saturday and the away fixture at Swansea City ten days later could become a winner takes all – perhaps loser squanders all would be more accurate. On this evidence, there will only be one winner. The only away league game Southampton have won since September was at Alan Pardew’s West Brom.

Chelsea are a club supposedly also flirting with relative crisis, but unlike Southampton they contain a number of gems. Eden Hazard typically comes in for the strongest criticism when Chelsea under-perform, but that is only because we know how high the Belgian’s beautifully painted ceiling is. When he plays as brilliantly as he did at Wembley on Sunday, it’s worth Hazard having his own ball. He is the type of player you would pay to watch kicking a tennis ball against a wall.

Southampton were no match for Hazard – they were barely in the same postcode. Three players were booked for fouling him, but referee Martin Atkinson may as well have written their names down as prizewinners for getting close enough to make contact. Others swiped and nudged at memories of where Hazard had been a second previously, made to look foolish a moment before making themselves look foolish for good measure. Tackling Hazard is like stabbing a ghost.

There were other positives for Conte too. Giroud took his goal superbly and justified the manager’s faith, and Alvaro Morata then played the super sub role perfectly. No player has assisted more goals for the same player than Cesar Azpilicieta for Morata in the Premier League this season; the trick was repeated. If only Morata could kick the ball as accurately as he can head it.

That second goal killed the game as a contest, but it had been in intensive care for most of the match. Chelsea have a FA Cup final on May 19, in which Conte will hope to add some gloss to his Stamford Bridge departure. That promises to be a fonder farewell than Southampton’s exit from the Premier League. This is a club that has been coerced into hibernation by two wrongly-appointed managers.