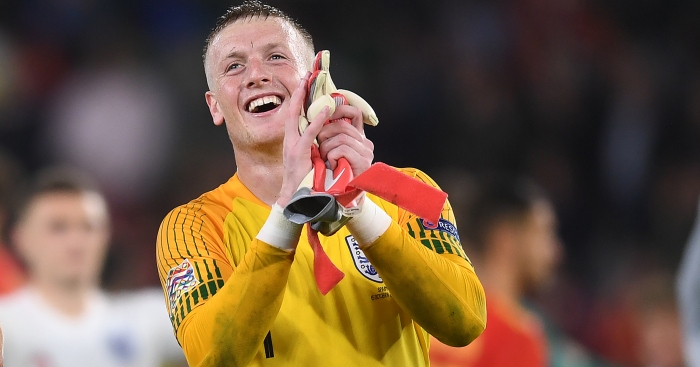 As the England players reflect upon a job very well done in 2018, few of the individuals in Gareth Southgate’s squad are entitled to feel more self-satisfaction than Jordan Pickford.

The Everton keeper had only just made his senior international debut this time last year and six months ago, the title of England’s No.1 was still very much up for grabs. Jack Butland urged Southgate to make his decision and put the contenders out of their misery in March, but the Stoke stopper did not hear the answer he was looking for.

The two main candidates for the starting spot have enjoyed and endured very contrasting fortunes during 2018. Butland appeared to be winning the chase for Southgate’s gloves but the summer brought relegation with Stoke; a lack of suitable offers to keep him in the Premier League; and the disappointment of being made to watch England’s success from the bench rather than behind Harry Maguire, John Stones and Kyle Walker.

Since it became clear that Pickford was to get the nod, the 24-year-old has gone from strength to strength. After emerging from the middle of the pack in a four-horse race, Pickford streaked clear with consistent and sometimes brilliant form at club and international levels to become Southgate’s England No.1. And No. 2.

Still, despite doing all he can to silence his doubters, Pickford hasn’t convinced everyone just yet. Gary Neville is coming around ‘slowly’ but even now, the former England defender says of Pickford: “He’s not my idea of what a goalkeeper would be.”

That is part of the problem for today’s scrutinised stoppers: it seems everyone wants something different from a keeper.

In Neville’s time – especially throughout the early part of his career when his expectations were formed while playing in front of Peter Schmeichel – goalkeeping was a simple task, albeit a thankless one. Keep the ball out of the net and your job is done.

Now, the workload has been doubled with the added brief that the last line of defence should act as the first line of attack. The shift in priorities seemed to lurch towards what a keeper can do with his feet rather than his hands, but after Manchester City spent Pep Guardiola’s first season with the ghost of Claudio Bravo in their goal, some balance appears to have been restored.

Southgate expects his goalkeeper to do the lot and if Pickford’s excellent distribution qualities didn’t swing the decision in his favour, it was certainly a large factor. But the England boss has always spoken first of Pickford’s ability to make saves, crucially-timed ones, before then reflecting on his talent in possession.

Another fantastic save by Pickford on his @England debut denies Germans! pic.twitter.com/cNmSj1XHoA

“You know with goalkeepers there are various levels,” said Southgate after Pickford kept a clean sheet against world champions Germany on his debut, which featured two brilliant stops. “They either save the ones they should save and not much else or they go to the next level where they make match-winning saves.

“He’s certainly made really important saves. And of course with his feet he gives the team a different dimension as well.”

The England boss echoed that sentiment after Butland’s plea for clarity, which came before Pickford’s second cap against Holland in March. “Pickford is a very agile goalkeeper, quick around his goals, he is capable of making big saves, his distribution is excellent – a really outstanding distributor of the ball with his feet which is how we want to play.”

Throughout the auditions, Pickford emerged as comfortably the most rounded of England’s goalkeepers. But more excitingly for the Three Lions, the Everton keeper doesn’t just tick the most boxes for a modern stopper, he excels in the most important criteria.

Even when the stakes are highest, Pickford is willing and able to play keep-ball and move possession around the back line, with the England keeper averaging 34 passes per game at the World Cup compared to the tournament average of 28, with a 77% accuracy rate, compared to the average of 68%.

The variety and range of Pickford’s distribution is equally as impressive as the accuracy. If England’s opponents use a high press that cannot be played through, Pickford, like Ederson at City, has the range to go over it, all the way to the opposition box. Even if the pass is not inch-perfect, it rarely gives up good possession to the opposition because defenders are usually on the back foot while retreating, having not long since pushed up to stay compact. In this respect, Croatia boss Zlatko Dalac labelled him “probably the best goalkeeper in the world with long passes” while his side volley should only really be shown after the watershed.

When it comes to the more traditional aspects of goalkeeping, Pickford has  delivered for England on numerous occasions in the last year. Southgate spoke about keepers achieving “the next level” by making match-winning saves and his keeper has certainly made decisive contributions at crucial times.

Just last week against United States, Pickford denied Christian Pulisic a goal for the visitors to cling to just a minute before England scored twice in quick succession to break their resistance. He made huge saves in the World Cup knockout stages to deny Colombia and Sweden when all the scrutiny focused on the former Sunderland goalkeeper’s size.

Standing at six-foot-one, Pickford lacks the stature of the likes of Thibaut Courtois, who was quick to point that out during the tournament. But Pickford’s speed and explosive power compensates for that lack of natural height. You might argue that literally looking up towards most of his contemporaries has made him a better goalkeeper because he has not been able to rely on his frame, grafting harder on the other physical variables, as well as his positioning around the box and timing into his set.

If ever Pickford was to be exposed because of his height, it would have happened long before Courtois attempted to highlight it. The Sunderland academy graduate has come through the school of hard knocks, playing in all the top five tiers of English football before gaining England honours. Prior to making his Premier League debut as a 21-year-old, Pickford already had well over 100 first-team games under his belt.

From the references of all the coaches he played under at Darlington, Alfreton Town, Burton, Carlisle, Bradford and Preston, the quality that stands out is Pickford’s mental strength. If that natural resilience and drive was missing, it would have been obvious in non-league, long before he got to the Premier League. But Pickford passed every test with flying colours on his way to the top – and most likely his ascent has some way still to go.

Reports over the weekend suggested Manchester United have identified Pickford as their preferred candidate to replace David de Gea. Everton would have a lot to say before that prospect ever became a reality but despite not being Neville’s ‘idea of what a goalkeeper would be’, Pickford does appear destined for a stage like Old Trafford.

Another Everton keeper, their greatest No.1 ever, summed it up in the summer. Neville Southall said: “Jordan has to ask himself only one question now. How good does he want to be? If he wants to be the best in the world, then he must go for it because he’s got the tools to do it. He just needs to keep working hard, have some luck, stay clear of injuries and have the mindset of a top‑drawer goalkeeper. If people leave him alone, he’ll be England’s No 1 for the next 10 years.”

The security of England’s goal appears to be in the safest of hands. Let’s get the rave on.