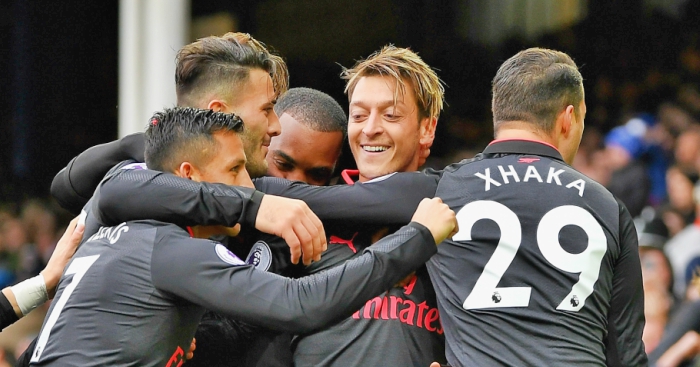 The accepted wisdom is that the ‘noise’ Mesut Ozil was imploring both he and his followers to ‘ignore’ on Saturday was speculation regarding a move to Manchester United. ‘Furious’ was the word used by one tabloid to describe the German’s feelings over reports that he had told his Arsenal teammates he wanted to leave for Old Trafford.

In the midst of protracted contract negotiations with Arsenal, it felt out of place. A player who has had to constantly ride a wave of public criticism since he arrived in England four years ago was suddenly being targeted by stories leaked internally. Whether this was the work of the infernal Arsenal PR machine or simply a British newspaper placing cat amongst pigeons to sell copies, it was a situation designed to damage and target only one individual.

If this was a campaign to turn supporters against Ozil, it was one that former Arsenal players were only too keen to support. Paul Merson questioned the German’s work rate in September, while Emmanuel Petit accused him of having a “defeatist attitude” and a “nonchalance that transmits to his teammates”.

It was Martin Keown who reserved the most scathing critique. “I think in some departments he’s already left,” said the former defender earlier this month. “Psychologically, mentally, he’s already left the football club. I think [Wenger] doesn’t want that sort of player around the youngsters in the group. I think he’s downed tools, he wants to go and it’s going to get messy.”

‘Ignore the noise’ was the message on Saturday, but Ozil decided to drown it out with as loud a rebuttal as possible by Sunday. A man-of-the-match performance was a response as emphatic as it was necessary.

Everton were willing sacrificial lambs, and the Toffees slip into the relegation zone after a 5-2 defeat, but Arsenal managed to disprove Troy Deeney’s scientific theory at Goodison Park. The hosts withstood an early onslaught to take the lead after 12 minutes through Wayne Rooney, and it felt as though the Gunners would collapse to a fourth away defeat in their last five Premier League games. Their lack of cojones would surely come to haunt them again.

They stuttered and threatened to fall flat on their faces, but regained their footing by half-time. Constant pressure on Jordan Pickford’s goal eventually paid off when Nacho Monreal equalised, and Ozil, Alexis Sanchez and Alexandre Lacazette combined to devastating effect in the second half to secure a much-needed victory. That their best attacking performance of the season came with all three in the starting line-up is no coincidence.

But it was Ozil who was the star, scoring one goal and creating eight chances. He provided six key passes in the first half – more than any other player has managed in an entire match this season. He was supplying the bullets; his teammates were misfiring.

The German also ran further, completed more sprints, reached a higher top speed and a higher average speed than Sanchez. Presumably he was being carried around Merseyside in search of the tools he had downed months ago.

Ozil is not the perfect player. His flaws are plain to see, and Arsenal’s performance against Chelsea in his absence last month added credence to the opinion that, in certain games, he should not start. But while praising a wonderful individual performance against this Everton side is akin to congratulating a fireman for successfully blowing out candles on a birthday cake, it is necessary to even out the ridiculous ire he has been subjected to.

Of the two players whose Arsenal contracts have become a bigger story than the club itself, Ozil is a far easier target than Sanchez. On Sunday, the German silenced the noise instead of simply ignoring it.