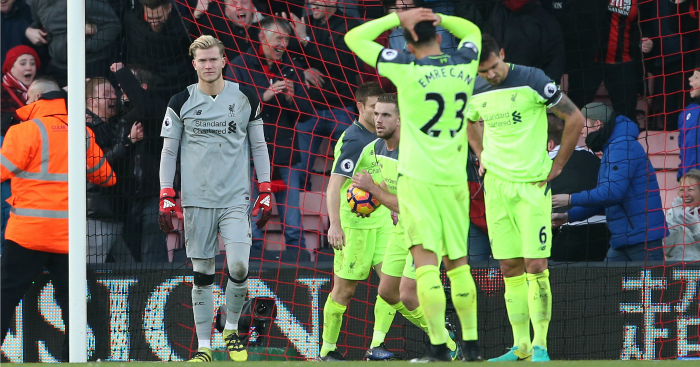 “3-1 and you messed it up,” said the Sky Sports commentator, quoting the Bournemouth support as the final whistle blew. The reality was a little more spicy, but even that will not match the agricultural language used by Jurgen Klopp towards his players after the game. Having lost from 2-0 up at Southampton in March, Liverpool conceded three times in the last 15 minutes on the south coast again. From a position of comfort to one of humiliation.

Success breeds complacency, and complacency breeds failure. Liverpool pummelled Bournemouth before the break, but let them back into the game through their own defensive incompetence. The home team had a single shot in the first half and, by then, Liverpool were already two goals clear and heading back into second place. Their subsequent capitulation will have Klopp tearing out his hair and throwing his glasses at the wall in anger.

Let’s not underestimate the strength of resolve displayed by Eddie Howe’s Bournemouth. The introduction of the brilliant Ryan Fraser was game-changing, but so too was the strength of spirit. Bournemouth’s players diagnosed Liverpool’s potential for collapse at 2-1 and exploited it to the full even after conceding a third. I’m in danger of being handed a restraining order by Steve Cook’s solicitor, but no player epitomises the desire in Howe’s squad to drag his team on despite setback. Cook’s 19 clearances was 11 more than any teammate, but he’s also scored six times since the start of last season and assisted the winner.

Despite Bournemouth’s excellence, we must linger for longer on Liverpool’s ineptitude. Joel Matip’s absence left a hole that Lucas Leiva could not fill, and Dejan Lovren continues to have more off days than a central defender for a title-winning club should. From the moment that James Milner had given away his first penalty for seven years (after loose play by Lovren), Liverpool entered a period of farce temporarily abated by Emre Can’s goal. The more men Liverpool put behind the ball, the more likely they are to cause each other’s downfall.

However, it’s behind his defence that must cause Klopp the most concern. After three clean sheets in succession relieved some of the Loris Karius-related nerves, 45 minutes against Bournemouth was plenty long enough to bring them rushing back, a wave of nausea to ruin Klopp’s jovial spirit. Karius flapped at two crosses, let one shot go through his gloves, did insufficient to stop Fraser’s drive and saved his worst mistake for stoppage time. Bournemouth had eight shots on target, and scored with four of them. One of those that didn’t go in was fumbled at the feet of Nathan Ake to turn a disappointing draw into calamitous defeat.

Karius made no secret of his desire to take Simon Mignolet’s No. 1 spot when joining the club from Mainz, and Klopp has made even less secret of his determination to back his goalkeeper through thin and thinner. In truth, Klopp has no choice. Changing your goalkeeper is a bigger statement than dropping a right-back or central midfielder. There is no such concept of goalkeeper rotation for league games.

It’s not just Liverpool who are suffering from the growing pains of a new goalkeeping order, of course. Pep Guardiola’s decision to trust Claudio Bravo over Joe Hart has not yet been proved correct or otherwise, but Bravo was again weak against Chelsea. Maarten Stekelenburg has struggled at times for Everton, David Marshall may lose his place at Hull and Matz Sels already looks set to leave Newcastle after joining as first choice.

The similarities between Manchester City and Liverpool are clear: both defences need an example of composure to follow, and both have nothing of the sort. A great goalkeeper can win you matches, but an inadequate one can cost you the chance of success. Continue for much longer, and this will cost Liverpool a shot at the title.

This is not intended as a definitive judgement on Karius’ ability. David Preece wrote an excellent piece for the Guardian on why patience is needed while goalkeepers settle, and he’s right. This is the position in which, more than any other, familiarity with surroundings and communication with teammates are key. Still, that doesn’t help Liverpool in the now. While the jury remains out, points are being lost.

Karius is a conspicuous hallmark of old Liverpool, a ‘next year could be our year’ player for a club desperately trying to shake off that tag. Klopp bought a goalkeeper for the future; it turns out the rest of the first team is good enough for now.