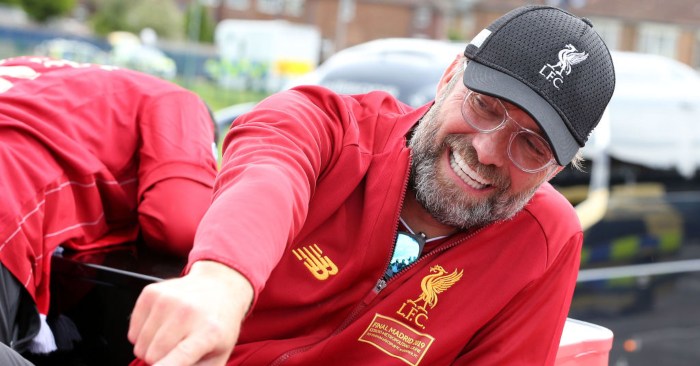 Something, someone, anyone. Those are just three of the responses to Liverpool’s tweet announcing the return of Dejan Lovren and Divock Origi to training, though it could have been a tweet about absolutely anything at all. One increasingly irritating facet to football Twitter is the greeting of any club tweet at all with pleas to SIGN or ANNOUNCE whichever player is currently being linked with a move. At Liverpool, in the absence of any concrete information, they are simply asking for ‘someone’ or ‘anyone’. It’s like Tottenham 2018 all over again; radio silence is making fans very, very nervous indeed.

Except there has been no radio silence, but a very, very clear indication from inside Liverpool that actually, there will be no first-team signings this summer. Reserve left-back? No need because James Milner and Joe Gomez can both ‘do a job’. Back-up forward option? Absolutely no need because Rhian Brewster is an Under-17 world champion. Experienced cover? Definitely no need when you can sign Sepp van den Berg (17) and Harvey Elliott (16).

And then Jurgen Klopp spelled it out. “If Ox can stay fit – new player for us,” said the German. Fair. “Rhian the same; he is a really big talent. So, new player.” Okay, though it does not feel like an exact replacement for Daniel Sturridge. “Like Joe Gomez is pretty much a new player.” Fair-ish, though he did actually play more football than Lovren last season. “Adam Lallana, new player.” Oh Jurgen, you really are testing this theory now.

When adopted by almost any other manager, the ‘like a new signing’ trope provokes outright mutiny rather than the mere anxiety currently prevalent among Liverpool fans. Klopp has so much credit in the bank that he could probably declare that he is re-signing Andy Carroll and many would shrug and say ‘Jurgen knows’. Having won the Champions League and finished within a point of possibly the greatest of all Premier League teams, Klopp basically has carte blanche; he cannot and will not be queried by most Liverpool fans. Or at least not until things go drastically wrong. Like David Bowie devotees sitting though Hours and Quentin Tarantino fans trying to find joy in Death Proof, most Liverpool supporters will forgive Klopp almost anything right now, including the far-fetched claim that the 31-year-old Lallana is a ‘new player’.

And yet the pleas continue; a tweet including pictures from pre-season training is greeted with escalating anxiety, including the baffling ‘sign a winger ffs We’re so far below the rest it’s embarrassing’. Not in football terms, obviously, but in terms of signings. And in July, it is all about signings. Just keep someone, anyone through the door.

This is quite the test set by Klopp to Liverpool fans, to trust him and the club’s transfer committee when they decide – if indeed the club briefings are not a smokescreen – that this squad needs no new senior blood, that returning injured players and second-season footballers like Naby Keita and Fabinho will provide the necessary boost to avoid stagnation, that an over-reliance on three forward players for goals is a gift to be celebrated rather than a problem to be solved. We ourselves have said that Liverpool need very little and that prior to any transfers, they were our favourites for the title, but we always thought they would do something. Doing nothing – not out of necessity but through choice – is a new groove entirely.

This is a risk that has been earned by the brilliant management – both in terms of coaching but also transfer business – of the last three years, but it is nevertheless a risk. The only thing worse than making poor signings is making no signings at all, and it will be the first, second and last port of call if Liverpool go backwards next season. And after a Champions League victory and near-perfection in the Premier League, realistically that is their likeliest direction.

Never mind spending £45m on an uncapped right-back, announcing absolutely nothing could be the bravest act of any Premier League club this summer.