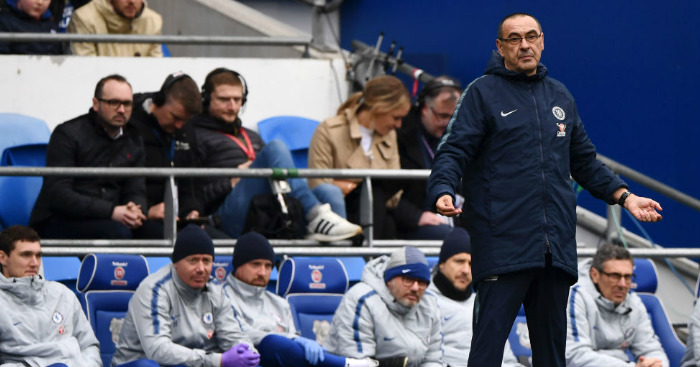 It’s better to be lucky than not, but wow, Chelsea are really pushing that to the extreme at the moment.

Having gone behind in the first minute of the second half to a fine Victor Camarasa volley, Maurizio Sarri looked like a man on the brink. Fans can be a silly and fickle bunch at the best of times, but the cries of “we want Sarri out” that rang out from the away end at the Cardiff City Stadium were, in this case, pretty understandable.

That’s not to do down Cardiff, who stuck to the gameplan that gave them the best chance of getting three vital points. With Burnley and Southampton both winning yesterday, they really needed the win; draws do precious little for them at this stage of the season and with a five-point gap from safety. Chalking this off as a game they had expected to lose anyway was never an option, and contrary to, say, Fulham yesterday, their players did as well as Neil Warnock could possibly have asked from them.

But the sad truth is that we have come to expect exactly this kind of listlessness from Sarri’s Chelsea. Truly excellent performances have been the exception rather than the rule this season, and just as it was beginning to look like they had learned their lesson, they come back from the international break and serve up this dross.

Leaving out two of your best players – scratch that, your two best players – is not a crime, but it is a luxury, and Chelsea came perilously close to showing why they have not earned anything approaching even such a minor show of decadence.

It’s not like Chelsea have been unfailingly brilliant with N’Golo Kante and Eden Hazard on the pitch, but without them here, they were useless. They will not get the benefit of such officiating blunders as the one that allowed Cesar Azpilicueta’s equaliser to stand every week.

As much of an arse as Neil Warnock can be on the touchlines at times, you could understand his sheer inconsolable consternation on this occasion. Offside calls do not get more clear-cut than that one.

And of course, without a first goal you can’t get a second. Ruben Loftus-Cheek’s stooping header in injury time gave Chelsea victory, but given the context of the rest of this season this did not feel like an occasion that would have left Chelsea fans shrugging their shoulders and saying “well, three points is three points”.

But they are vital nonetheless, buying Sarri seven more league games – plus whatever remains of their Europa League campaign – to prove he is capable of getting through to his players, making the required changes, and putting things right. They are still just a point behind Tottenham in third. But they can’t keep leaving things up to good fortune like this.