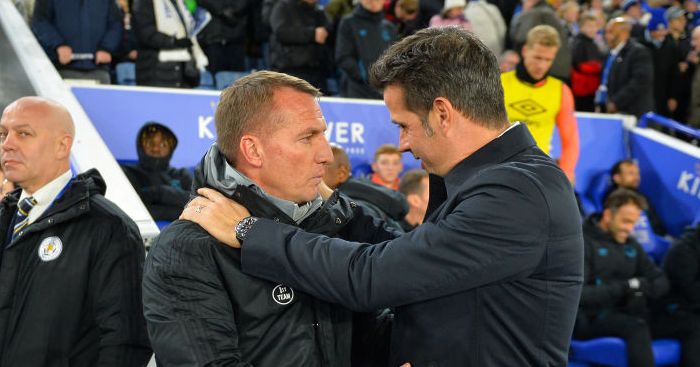 It is a common misconception that Leicester won the Premier League title by chance in 2016. It was the consequence of the perfect storm, of course: the normal frontrunners all tripped over their shoelaces and they ruthlessly capitalised. But it was not entirely unplanned.

“I am asking for three years, and we’ll be there,” said the late Vichai Srivaddhanaprabha in May 2014. With Leicester having just won the Championship with 102 points, it felt like a jarring plea for patience. Who asks for more time to complete not only mission impossible, but mission uncontemplated?

His aim, as head of a consortium that bought a club fresh out of League One in 2010, was to reach the Premier League’s top five. “We won’t take the huge leap immediately,” he added, with a blissful unawareness. “Do we have a chance to beat them? Yes, we have, but I think we need to establish our foothold in the league first and then we think about our next step.”

Everton, at that stage, had just enjoyed their greatest Premier League season ever in terms of points. They had finished above Manchester United and Tottenham, closer to champions Manchester City than eight-placed Southampton. They came fifth: the first of Leicester’s unscalable mountains.

Their paths have certainly diverged in the five years since. While Leicester reached an unthinkable peak – and are planting as many rods as possible to make lightning strike twice – Everton have meandered and muddled in search of their own promised land. The Toffees were in perennial pole position to challenge the elite; the Foxes have planned their rear-view mirror overtake impeccably.

That was the story of their 94-minute meeting at the King Power Stadium on Sunday – and those stoppage-time minutes do bear including. A disciplined, organised Everton took, deserved and defended their lead. Marco Silva, the bell for last orders having rung in his ears for weeks, chose to share his latest sip at the last-chance saloon with a three-man defence.

If this was to be an unlikely encore, Richarlison was a fitting final clap. He started and finished a sweeping move that incorporated Dominic Calvert-Lewin’s hold-up play and decoy run, Alex Iwobi’s dribbling and Djibril Sidibe’s cross, before the Brazilian headed home to repay his manager’s unwavering faith in him.

And for exactly 45 minutes, that was enough. Both teams channelled their former managers: Leicester as slow, predictable and plodding as they ever were under Claude Puel, countered at ease by an Everton side Sam Allardyce would have been proud of.

Therein lies the problem; Everton cannot maintain performances for more than half a match, and Leicester cannot be expected to underperform for anywhere near as long. The visitors led the race but had run out of gas by the time the hosts pressed on the accelerator.

Silva orchestrated the opening stages with his tactical approach, but Brendan Rodgers has developed a particular sense for finding intriguing answers to new questions. How could Everton be broken down? By introducing a player with no Premier League goals or assists since November 24.

It was a novel approach, not least because this was Kelechi Iheanacho’s first Premier League appearance of any kind since the cameo that included his title-clinching miss against Manchester City in May. Liverpool supporters must not have expected him to burn them for a second time so soon.

His assist for Jamie Vardy’s equaliser was sublime, coming six minutes after his introduction. His winner, ably laid on by VAR, was wonderful. His impact was astonishing.

But the key was always that “foothold” that Srivaddhanaprabha referenced in 2014. Leicester’s was Nigel Pearson, who elevated them to Claudio Ranieri. When they needed the same effect, Puel came in to steady the situation and Rodgers inherited the best elements of his work and was employed to eliminate the poorer parts. Everton’s only dalliance with stability over status was their Allardyce panic. They need someone to help them walk again before they run.

And so the paths these two teams follow only continues to split. Leicester have established themselves as Liverpool’s main rivals for a second title in four years. They have more than twice as many points as Everton, who spiral further towards the relegation zone. Neither know where this journey will end, but only one has cause to fear the unknown. It is now clear that Silva will not be – and arguably has not been – guiding them.