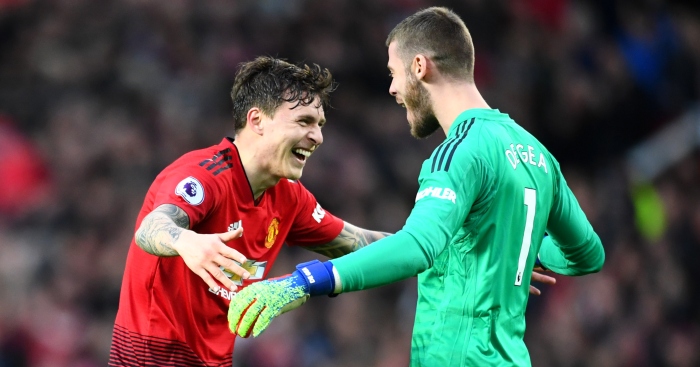 It’s tempting to clear throats and find opening notes to yet another Ole Gunnar Solskjaer redemption song when watching the confident, implacable Victor Lindelof at the heart of the Manchester United defence, but the truth is that the Swede was halfway down the path towards being an excellent Premier League defender before Solskjaer had an encouraging word in his ear and turned that walk into a stride and then into a sprint. His emergence as United’s finest centre-half owes something to coaching and confidence, but this is largely about the adaptation of a young defender to Premier League football. It’s a familiar tale that takes time to tell properly, and yet we rarely allow it to breathe, never really learning to judge on age as well as transfer fee. Perhaps we need an algorithm.

When a club pays £30m for a footballer, we are conditioned to think that footballer should already be excellent, should be the finished product, should look like a £30m footballer. Our brains have not yet adapted to the idea that £30m could possibly be spent on potential, that £30m might be an investment in the future rather than the present. Occasionally we are reminded by a young footballer’s excellent second season, but then we forget and deride the next footballers as flops before they have had their 24th birthday.

What a flop Lindelof has become btw. The biggest flop of the season so far. £31m to be 4th choice CB behind both Jones and Smalling.

Paul Merson said that if aliens came “down from the moon” they would think Huddersfield Town’s Christopher Schindler was a better defender than Lindelof – then 23 – during the first few months of his United career, and as recently as August, the rather more sensible Jamie Carragher said: “I can’t really criticise Lindelof because it gets to the stage that he’s so far out of his depth that you start to feel sorry for him.” And you could hardly blame him; at that point Lindelof had dropped behind Ander Herrera in the United centre-half pecking order.

Things did not immediately improve – in late September, the local newspaper was describing him as ‘all over the place again and only starting matches by default’. But by the end of December, they were naming him United’s best centre-half of the half-season. It might have seemed a tad ‘tallest dwarf’ as United had recorded only two clean sheets in 19 Premier League games, but it perfectly illustrates how the Swede had somehow become the most important component of United’s back line. Since then, he has only got better, coaxed and cajoled by a manager who understands how it feels to arrive as a young man at a club of United’s stature, even if he did not come with the same price tag attached.

That’s now away wins against Tottenham, Arsenal and Chelsea in the space of two months with Victor Lindelof at the back. He’s cemented that position brilliantly. Another convincing and dominant display at the back from the Ice Man!

“It is not easy coming to England, and Man United is a different level with different demands on your shoulders,” says Solskjaer. “Sometimes it takes time. Victor has had a tough time to start with, and now he has really come good.”

But while Solskjaer arrived at United ostensibly as back-up and became a pleasant surprise, Lindelof arrived as one of the top flight’s most expensive defenders and was expected to immediately embrace a different culture and lifestyle while simultaneously adapting to a higher level of football. And when you are a defensive-minded player, that it is at least doubly hard. A young winger can lose the ball ten times and we call him ‘brave’; a young defender can lose the ball once and we call him ‘naive’.

Examples of young centre-halves seamlessly stepping up to Premier League football are scarce. Manchester City could afford to give Aymeric Laporte six precious months to adapt, and he now joins Lindelof and just two others (Nathan Ake and Issa Diop) in being sub-25 and playing over 2000 Premier League minutes this season. These are the rarities. Managers quite understandably favour experience in a position where one misstep can mean defeat.

“For a foreign player to come here from a league that’s not as challenging as this one, in Portugal, I think it’s difficult,” said Rio Ferdinand this week when discussing a player he now sees as similar to himself in terms of ‘calmness’. And that’s clearly where you can see the influence of Solskjaer, who has taken the shackles off Lindelof’s feet so he can dance. “I cannot talk about what the tactics were, but I told him: ‘Victor one of your strengths is to carry the ball out from the back, pass the ball properly,’ and he has been allowed to do that.”

But it is perhaps in the United’s manager’s next words that we come closest to finding the reason for his vast improvement this season: “Victor is a fantastic boy. He is going to have a baby soon. He is going to be a man and he is maturing.” Sometimes the answer really is that simple – he is getting older, wiser and closer to the £30m defender we demanded to see almost two years ago. Now we just need to remember that the next time a big club spends big money on a ‘big flop’.