Home All The News F365 Says: Liverpool and Klopp need a substitute teacher 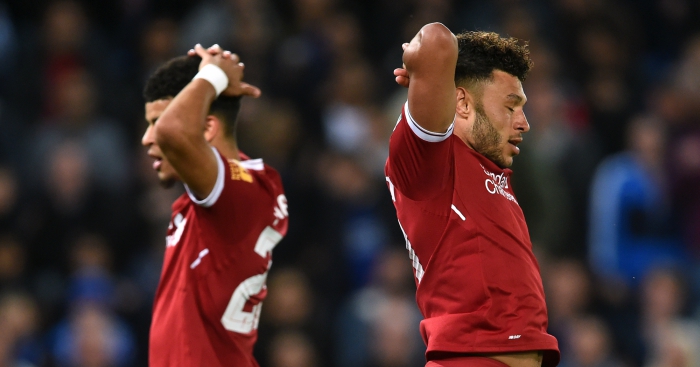 Each of us, at one point or another, have found ourselves watching a film ridden with maddening flaws and avoidable mistakes. How did Andy Dufresne stick the poster back up perfectly from the other side? Why did Rose not shuffle over just a little bit to allow room for Jack, before letting go despite telling him she never would? Why is Adam Sandler still paid to make and star in movies?

Three months into this season, and Jurgen Klopp must feel like he is watching the exact same film with the exact same maddening flaws each week. Liverpool had most of the ball, most of the opportunities and most of the shots against Newcastle, but emerged from St James’ Park barely clinging to a 1-1 draw.

If the majesty involved in Philippe Coutinho’s opener – a long-range strike from the left-hand side – felt familiar, so did Newcastle’s equaliser. Jonjo Shelvey sliced through the gaping hole in the central defence to play in Joselu, who only scored as the recovering Joel Matip kicked the ball against his shin. In a season typified by defensive deficiencies, this was a new kind of incompetence from the visitors.

As ever, Liverpool had the chances to take all three points. Mohamed Salah, Daniel Sturridge, Dejan Lovren and Sadio Mane all spurned opportunities as the club again relied on one moment of brilliance to rescue them. They have now had 232 shots in 12 games across all competitions – more than any other side in Europe’s top five leagues. And yet in the Premier League alone, Manchester City, Manchester United and Chelsea have all scored more.

The difference between Klopp and your average viewer on Sunday is that the German had the chance to enact change. He was sitting in the editing booth: he was the one man able to correct each of the exasperating errors in this latest Liverpool sequel.

Yet it was not until the 74th minute, when Newcastle had reached such a point of comfort and tranquility that deckchairs and sunglasses were being readied, that Klopp made his first substitute. The visitors had not had a single shot since the 54th minute; a change was needed much earlier.

If Roberto Firmino and Dominic Solanke were handed scant opportunity to really stamp their authority on the game, spare a thought for Alex Oxlade-Chamberlain. The summer signing was afforded six minutes; his entire Premier and Champions League career for Liverpool comprises of 75 minutes across five substitute appearances.

It appears to be Klopp’s Achilles’ heel. In seven Premier League games this season, only once has he made a substitution before 61 minutes, and only three times before the 74th. The only instance of a player rising from the bench to the pitch before the hour mark was against Manchester City – at half-time when two goals and one man down.

A manager must manage, and in that job description he must be able to positively affect a game through either a change in tactics or players. There are but a few reasons to bring on a substitute: to try and rescue a result, to help change the system, to replace an injured player or to waste time while defending a win. To expect players to instantly perform under immense pressure with 15 minutes of a match remaining is to ask them to fight a perennial uphill battle. That Sturridge is the only Liverpool player to score a goal as a substitute in all competitions this season – the fourth in a 4-0 win over Arsenal in August – suggests it is also a losing one.

In seven league games, Liverpool substitutes have been afforded 306 minutes. The only clubs to hand fewer minutes to their substitutes are Manchester United (300), Burnley (283) and Tottenham (229), sides who can afford to be reactive in defending a result instead of proactive in chasing one. Klopp has so much misplaced faith in Plan A that he often forgets he has a Plan B – for bench – at his disposal before it’s too late.