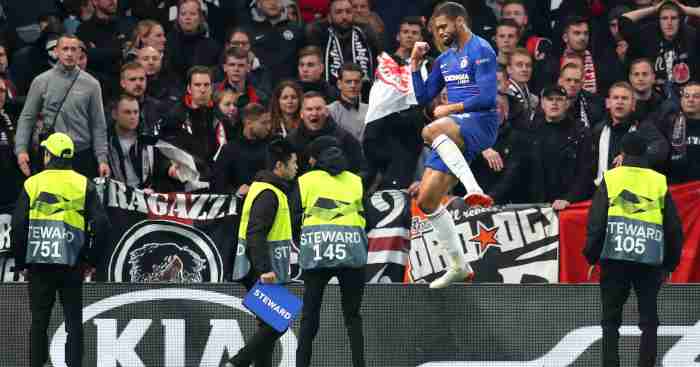 If ever Maurizio Sarri and Ruben Loftus-Cheek might be expected to be on the same page, it should probably be now. But even this week, after the Chelsea academy graduate has expressed his gratitude to the manager for six starts in the last eight games with a couple of goals and three assists, the pair have spent the last few days contradicting each other.

Ahead of the Europa League semi-final second leg, Loftus-Cheek’s fitness was the first point of contention. The midfielder has been open about the lower back problems which have hampered him since school but, having found ways to manage the issue, Loftus-Cheek insisted that it was not likely to be a long-term concern.

“I don’t think it’s something I’ll have to suffer for the rest of my career,” he said. “I’m feeling really good now, the best I’ve felt. I’ve not had a twinge in my back for weeks now. It’s looking really good.@

Personal agendas cloud the second issue of debate. Sarri reacted to the failure of Chelsea’s transfer ban appeal by claiming, not unreasonably, that to get any closer to the top two next season, “we’d need something from the market”.

In contrast, Loftus-Cheek’s cup was half full: “That would be a good thing for us young players, to have an opportunity to play more, if we do get a ban.”

You could hardly blame Loftus-Cheek if he greeted FIFA’s rejection of Chelsea’s appeal this week with a similar, low-key fist pump to that which followed his expertly-taken opener against Eintracht Frankfurt. His 10th goal of the season demonstrated the quality of finish and timing of run that few of his rivals for a midfield shirt seem to possess. But even that one rare moment of quality for Chelsea was not enough to earn the 23-year-old 90 minutes, let alone the 120 plus penalties it took for to set up another all-English European final.

Ruben Loftus-Cheek is on 🔥 right now!

He grabs his 10th of the season and Chelsea lead Frankfurt…

Eden Hazard in the build-up 😍 pic.twitter.com/OvatvJfm2P

His substitution, nine minutes before the first final whistle, was received as you might expect at Stamford Bridge these days. Few home supporters saw the logic of removing one of their few creative threats in the face of increased pressure from Frankfurt. Not that Sarri would have noticed. The manager was too busy pacing and ranting on the touchline. Not for the first time this season, it seemed few of his players were listening.

Sarri certainly had a point when his demands to press higher up the pitch shortly after half-time fell on deaf ears. Instead, the visitors were allowed to land the ball on Luka Jovic’s chest, and with David Luiz befuddled by an exchange between the Frankurt hit-man and Mijat Gacinovic, around which the Chelsea defender dropped when he needed to press then pressed when he needed to drop, Jovic capitalised with the kind of ruthlessness Sarri dreams about.

Sarri’s frustration is fair when you consider that his players have spent a fair chunk of the season seemingly ignoring what he has to say at the break. Chelsea have conceded twice as many Premier League goals – 30 per cent of their total – in the 15 minutes which follow half-time and the Blues struggled to regain any momentum after yet another sloppy start to a second half.

Loftus-Cheek toiled as hard as any of his team-mates but the England star spent much of the second half being run in the wrong direction by Frankurt’s tireless wing-back Danny Da Costa. Sarri seems to appreciate Matteo Kovacic for his legs – it is hard to think of any other explanation – but Loftus-Cheek demonstrated that he too can do the dirty work.

Going forward, Loftus-Cheek’s productivity compared to the rest of Chelsea’s midfield options must be alarming for Sarri. Tonight’s scorer has been directly involved in a goal every 124 minutes in all competitions. Ross Barkley is the second-most productive with a goal or assist every 239 minutes. Loftus-Cheek’s fellow starters, Kovacic and Jorginho, have contributed to a goal every 1498 minutes and 2105 minutes respectively.

If indeed Chelsea are unable to strengthen this summer, and especially if Eden Hazard still gets the move he craves, then Sarri cannot afford to ignore that creativity.