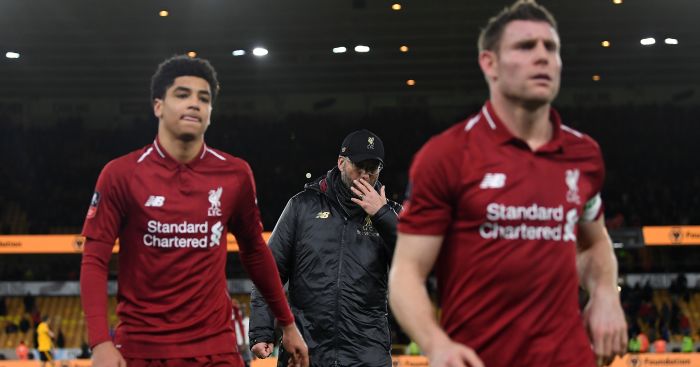 “We will see what we do,” said Jurgen Klopp over the weekend. “But we cannot, we will not sign a centre-half for one game or whatever, that will not happen.”

Those sentiments may have changed on Monday night as the Liverpool boss saw his side pick up another injury at centre-half during their FA Cup third-round loss to Wolves.

In a dreadful first half, Dejan Lovren provided one of the only talking points when he went down feeling his hamstring on four minutes to add insult to Klopp’s injuries. Lovren’s replacement highlighted the lack of depth at the German’s disposal with Ki-Jana Hoever making his debut to become Liverpool’s youngest-ever player in the FA Cup at 16 years and 354 days old.

Amsterdam-born Hoever signed for the Reds from the Ajax academy in September 2018 and is a Dutch under-17 international. He can be absolved of blame for their exit as the senior players in the side lacked the energy and courage to take control.

The Dutchman showed a few nice touches, along with a crucial interception in the first period. Liverpool supporters would have had their hearts in their mouths on a couple of occasions, particularly in the second half when Raul Jimenez took the ball from him in the area after Hoever failed to clean up quickly enough. Luckily for the youngster, the Wolves striker couldn’t steady himself to get a decent shot away. Overall, though, it was a fairly ice cool performance on his debut.

Other senior centre-backs Joe Gomez and Joel Matip are both currently ruled out through injury, having missed the entire festive schedule. The pair are likely to be absent for the Premier League tie against Brighton on January 12 but Klopp is hopeful he could have them fit for Crystal Palace on January 19.

Klopp also had some more bad news ahead of the third-round tie with Virgil van Dijk missing through an injury. Klopp noted that: “Virgil cannot play; he is at home and hopefully it is nothing, but he has played all the games so far, so we had to try to find a solution for that – and we found it, hopefully, with Fabinho.”

The summer signing from Monaco was used alongside Hoever. Fabinho has operated in midfield for most of his career, although he is currently Brazil’s regular right-back. The makeshift centre-half was actually one of Liverpool’s better performers on the night and has the qualities needed to thrive in that position.

That said, the Reds are now down to their bare bones with out-of-position Fabinho and a 16-year-old their only options in a key position, despite Van Dijk’s injury not sounding too serious.

A ruthless finish from Jimenez gave Wolves the lead seven minutes before half-time after James Milner – yes, James Milner – made a mistake. He stepped on the ball on the halfway line to give Jimenez a free run at goal and the Mexican made no mistake to hand Nuno Espirito Santo’s side a deserved lead going into the break.

Liverpool were their own worst enemy at times against Wolves, playing a high line and pushing full debutant Rafael Camacho and Alberto Moreno up the pitch to leave themselves exposed. If the Premier League’s ninth-placed side had found a better final ball then Liverpool would have been in further trouble before the interval.

Perhaps the most startling aspect of the Reds’ performance at Molineux was their lack of attacking intent. Divock Origi and Daniel Sturridge weren’t making enough meaningful runs as the ball kept bouncing back towards their disjointed midfield, while Xherdan Shaqiri and another youngster – Curtis Jones – lacked any creativity.

Origi hit back on 51 minutes out of nothing – the only way the Reds were going to score – when he smashed a ball from outside the box through the legs of Leander Dendoncker and into the net. However, Wolves have a long-range specialist in their ranks too and Ruben Neves hammered in his own stunner just five minutes later; it would prove to be the winner.

The Reds only had nine touches in Wolves’ box all match, while they mustered one measly shot on target. Sturridge looked annoyed at being substituted when he and Jones were replaced by Roberto Firmino and Mohamed Salah. If that’s as good as the England international can offer nowadays then his days at the title challengers seem numbered.

Clearly, the Reds will solve those attacking issues by bringing back Sadio Mane, Salah and Firmino for their next match against Brighton in the Premier League, while they are unlikely to play the rigid 4-4-2 formation used here. The major concern for Klopp will be his dwindling options in the centre of defence that could even force him to rush players back from injury. The sensible option could be to dip into the January market. Steven Caulker must be available.