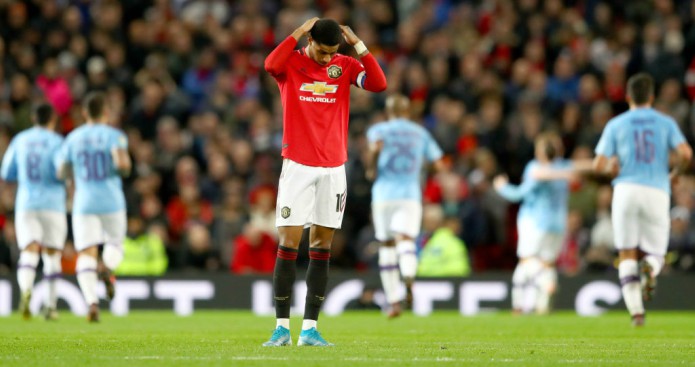 ‘The club’s stance regarding Solskjaer continues to be one of patience and claiming a Carabao Cup win in his first full campaign would make his position for next season close to a cast-iron certainty.’

That excerpt from The Guardian raised eyebrows before the semi-final first leg because of the reality of those reduced expectations; Alex McLeish has won a League Cup in the last decade, and victory in the same competition could not keep even Liverpool legend Kenny Dalglish in a job. And now this was seemingly enough for Manchester United, still apparently “one of the biggest clubs in the world” – in their own heads.

By half-time, the questions about reduced expectations were replaced by ‘what now?’, as well as ‘what the f*** was that?’ and ‘could this get any worse?’. If winning the Carabao Cup was enough to guarantee employment, what of being humiliated in the semi-final at home by your closest neighbours? Is that forgotten in pursuit of the FA Cup, the Europa League and a top-four place? Is it just a case of one chance gone, three more left in the season’s pot? Or is this the bottomless, magic porridge pot of the Grimm fairy-tale?

Certainly, watching them utterly befuddled by the movement of Manchester City, no feat of imagination could conjure a scenario where United will win a trophy this season. “You always want a trophy and we are so close now,” said Ole Gunnar Solskjaer before the game, but the truth is that they are a million miles away. This looked like City toying with a Championship side. A mid-table Championship side. They were defensively naive, tactically confused and entirely devoid of the deftness of touch and thrust that brought them Premier League victory over City last month.

But it was that Premier League victory that perhaps precipitated their downfall here. Like the kid who aces his mocks and does not do a scrap of revision, United seemed to think they could just turn up, earn a point from writing their name on the top of the paper and the answers would simply flow. Just as they did before. But City sneakily changed the questions – bringing in Ilkay Gundogan to staunch the counter-attacks that were largely left on the launch pad, and fielding a strikerless formation that saw Bernardo Silva and Kevin de Bruyne operate as a front pairing with a difference, both dropping deep and pushing wide to create either space or overloads. City – like all great sides – had evolved. United – like all average sides – could not cope.

Whether it was Fred showing the sensational Silva onto his stronger foot, Phil Jones doing not much of anything at all as he shaped to shoot for 1-0, Victor Lindelof twice failing in basic defensive duties for 2-0 or Jones being left twisted and prone for 3-0, United were torn apart in an astonishingly poor opening 45 minutes. That they got closer in the second half – and scored a goal to ease the scoreline and the humiliation – owed rather a lot to City’s own loss of focus and residual defensive vulnerability.

There will be inevitable talk of United keeping the tie alive with that Marcus Rashford strike but the real story here is that a rich, trophy-laden club had targeted the most minor of major trophies as justification for their employment of an underachieving manager, and that chance has all but gone. Even the lowest bar is way above their heads.