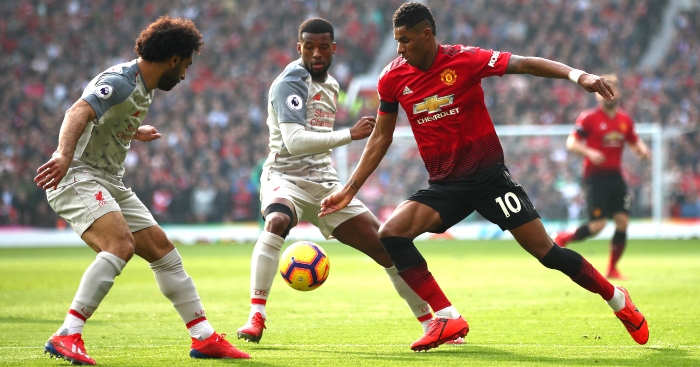 England set an example for everyone in the way they handled despicable racist abuse while putting a wretched Bulgaria side to the sword in Sofia. Among those taking notes must have been Ole Gunnar Solskjaer.

Amid the racism that interspersed the Euro 2020 qualifier, the Manchester United boss will have watched Marcus Rashford run amok. The England striker, recalled to Gareth Southgate’s starting XI, arrested his recent slump with a performance full of all the qualities that United have so woefully lacked for much of the season so far.

The tone of Rashford’s evening could have been set by his first touch – a mis-control so typical of his recent performances which led to Harry Maguire’s long pass drifting out of play. That made the 21-year-old’s second contribution even more remarkable. Taking the ball from Ross Barkley on the left flank, Rashford drove at two defenders, leaving one choking on dust and the other on his backside. Once in the penalty area, the easy option was to pick out any of the three runners hurtling towards the six-yard box. But Rashford ignored them all, instead unleashing two months of frustration in one shot which rocketed above the Bulgaria keeper’s head and into the far corner.

Had the agenda not been set by some backward locals, then chief among the talking points on Tuesday morning would have been Rashford’s stunning goal and the reinvigorating effect that had on his performance. Playing to the left of Harry Kane, when he wasn’t running inside and beyond the England skipper, he was hogging the touchline looking for the big switch which was prominent in Southgate’s game-plan.

The goal and his role appeared to remove the huge weight Rashford has been dragging around while toiling up front for United this season. The attacker has been thrust into the centre-forward position – a position he has openly coveted – because of a lack of alternatives and despite Solskjaer spending much of the early part of his tenure making Rashford’s case to play down the middle, the fact he started the season with Anthony Martial leading his line suggests the manager has had a re-think.

Recent evidence certainly backs up the theory that Rashford is not best suited to playing at the apex of the attack. United’s struggles are not a consequence of Rashford’s form – the opposite is more true – but the fact Maguire touched the ball in the Newcastle box more often than him (or any other United player) last week highlights how poorly United are performing in attack and that Rashford is not best utilised spending long periods facing his own goal.

Next up for the 12th-placed team out-fought and out-thought by Newcastle come Liverpool with their perfect record. Somehow, Solskjaer has to find a way to hurt the European champions while ducking the punches of Jurgen Klopp’s ruthless front three.

Fortunately for Solskjaer, Southgate has given the United boss a blueprint.

Solskjaer may be waiting on an update over Martial, who is taking his sweet time to recover from a hamstring injury, but it almost doesn’t matter. Whether the Frenchman is available should have no bearing on moving Rashford from the middle away from the clutches of Virgil van Dijk and Joel Matip. We wanted to see how Erling Haaland would fare against one of the world’s best defenders; now let us see if Mason Greenwood can similarly unsettle Van Dijk.

But the central areas are not where United can get at Liverpool. Rashford has done it from the left before, two seasons ago, when Jose Mourinho brought him in for his first league start in two-and-a-half months to play him high and wide against Trent Alexander-Arnold. Rashford scored twice and gave his England team-mate a torrid afternoon at Old Trafford as United ran out 2-1 winners.

On the right United can field one of the few shining lights in United’s dark, dark season. Daniel James has the pace and threat to frighten any full-back, especially one who willingly leaves space behind them like Andy Robertson on his regular forays forward.

Nobody has provided more assists in the Premier League in 2019 than Robertson or Alexander-Arnold. Despite Klopp’s front three, the theory goes that stopping their full-backs will take you a long way towards stopping Liverpool. Of course, Sadio Mane, Mo Salah and Roberto Firmino can turn a game in any moment with a flash of genius, but none have managed to do so at Old Trafford. Liverpool’s only goalscorers on Klopp’s Premier League visits to United have been James Milner from the penalty spot and Eric Bailly.

By copying England’s shape and Southgate’s deployment of Rashford, United can either push back Liverpool’s marauding full-backs or take advantage of their giddiness in attacking their own. If Robertson and Alexander-Arnold carry on bombing on, Rashford and James can make hay in the open grass behind them.

Moving to a three-man midfield allows Rashford and James to stay higher while also mirroring Liverpool’s shape. If Solskjaer was to stick with a two-man screening unit, Scott McTominay and Fred would endure a 90-minute long game of piggy in the middle. Even on the rare occasions Fred sees the ball, we already know he can’t use it.

With three in the engine room, Paul Pogba, if fit, gets to play what we think is his favourite position – who really knows? – and should Solskjaer retain faith in his other hopelessly lost Brazil midfielder, Andreas Pereira is at least slightly less out of his depth to the side of McTominay rather than in a forward line where he looks excruciatingly uncomfortable. If James Garner’s time is not now, then it must be soon.

Whatever Solskjaer may be planning ahead of a game which has defined United managers in the past, the under-fire boss absolutely has to change something, even if it is only to offer the illusion of intent. Southgate has shown Solskjaer a path that it would be ridiculous to ignore.