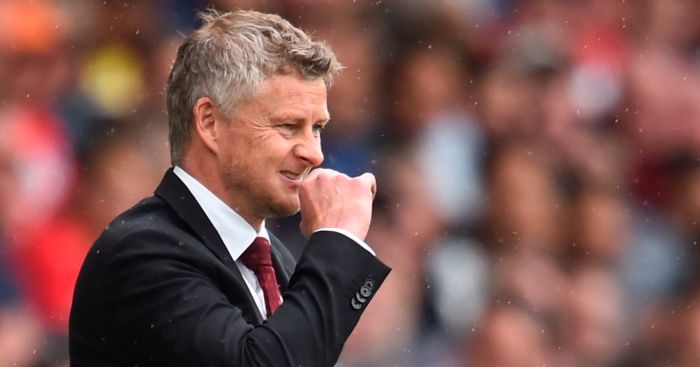 One out of five, Gary. ‘De Gea, Harry Maguire, Paul Pogba, Jesse Lingard, Marcus Rashford’ is a more accurate representation of Manchester United’s current core and one which serves as a slightly more flattering filter over the current picture at Old Trafford. But Neville’s overall point was on the money: “Manchester United, somehow, have got to find a spine.”

More than any other area, that is where this United squad lags behind Manchester City and Liverpool. The former have got their own problems caused by the sinkhole that has appeared in the centre of their defence. Their failure to address Vincent Kompany’s departure has left Pep Guardiola with only three senior centre-backs – one of whom could not be trusted during the run-in last season – which could cost them a third consecutive Premier League title. Especially given how solid Liverpool’s centre appears, even if they too missed an opportunity to strengthen from a position of authority.

City and Liverpool’s reluctance to recruit offered United a small window of opportunity to make up some ground on their two greatest rivals but the scale of the rebuilding task meant that it was only possible for Ed Woodward and whomever else acts as project manager at Old Trafford to get the job half done.

At least the foundations have been secured. Maguire’s arrival presumably didn’t escape Neville’s attention and though the recruitment of a centre-back of his quality was long overdue, it is certainly better late than never. The England defender has already made a huge difference on and off the pitch and with De Gea feeling more secure in his goal and his future, the conditions for him to reproduce the consistency that made him a four-time Player of the Season have never been better.

The only concern Ole Gunnar Solskjaer might hold over his defence now surrounds the alternatives to Maguire and Victor Lindelof. Unlike City, United have a glut of senior centre-backs on their books but they are little more use to the Red Devils as the rookies are to their rivals. Solskjaer had to part with his third-choice centre-back Chris Smalling because he was the only one among a quartet which includes Marcos Rojo, Phil Jones and Eric Bailly who attracted serious interest. Should Lindelof or, heaven forbid, Maguire suffer similar misfortune as Aymeric Laporte, United are in bother.

That is an area Solskjaer should address, but the United boss has even more pressing concerns in front of his back five. The Red Devils ran out time, money and/or ideas when it came to reinforcing their engine room this summer. Retaining Pogba was seen as a victory but it seems only a fleeting one. And United were short regardless of Pogba’s whims.

That was highlighted on Saturday in his absence against Leicester. Solskjaer had little choice but to pair Scott McTominay – not long ago one of the poster boys for United’s regression – with Nemanja Matic, who was making his first start of the season. And boy, did it show.

Matic seems destined for a stand-in role this season before he has his pick of clubs on the continent next summer. McTominay, though, is slowly morphing into the player Jose Mourinho thought he could be. Between him and James Garner, a youngster Solskjaer identified as “the next Michael Carrick”, United look set for half of their midfield base.

The dovetail to that is probably United’s biggest concern. The Pogba problem isn’t going away anytime soon and, as Neville suggested, United might be well advised not to call Mino Raiola to discuss a new contract; or indeed any matter, ever. The Red Devils might have got one more year out of the France star but any club can only keep a player against his will for so long.

The workload gets no lighter the further forward Solskjaer looks. United’s first-choice attacking midfielder at present is Jesse Lingard, the world’s youngest 27-year-old who hasn’t scored or assisted a Premier League goal in 11 of the last 12 active months. He’s busy, of course, but so too would be a puppy if you put it in a red shirt and gave it the freedom of Old Trafford for 90 minutes on a Saturday afternoon. United need more than Lingard seems capable of offering.

Did Jesse Lingard score or assist a PL goal?

Such a creativity void isn’t helping Rashford. Though the England striker says he wants to be a centre-forward, his actions too often still belie his words. Under Solskjaer, Rashford could not have a better opportunity to nail down the spot he was given for the second half of last season but questions persist over his drive to become a goalscorer in the mould of the Premier League’s best. Solskjaer apparently has his doubts since the United boss has given Anthony Martial the chance the French forward also feels he deserves without ever consistently showing why.

Between Rashford and Martial, Solskjaer is hoping one of them establishes themselves as his leading man, even if the manager considers Mason Greenwood to be the club’s most natural finisher. He appears to have been earmarked for gradual integration into the first-team and many of his minutes this season are likely to come in wider positions.

Down those flanks, Solskjaer has a great many options, even if most do not fully convince him. But, as Neville says, the most urgent remedial work must be done through the centre of his side. Identifying the problem is the easy bit; finding feasible solutions is rather less simple.

“If Manchester United get the right three players in amongst that squad, they won’t be far off,” said Neville. “It can be done,” he added, though the delivery of his three preferred targets probably cannot.

Solskjaer and Woodward apparently have their own wish-list in mind, a continuation of their buy British policy of the last window. Within those five names are to be found four central players, though the only sure-fire hit would be Jadon Sancho, a winger. The central quartet all bring with them varying levels of the unknown: no-one can be certain that Sean Longstaff or Nathan Collins would hit the necessary heights in the required time frame.

James Maddison is rather less of a punt. The Leicester playmaker certainly possesses the self-belief required to carry the weight of United’s creative burden while also bringing some versatility to an attack which currently appears all pace, little panache. If Woodward thinks he can can get Maddison next summer, though, for less than what he paid for Maguire, the United chief may have another thing coming.

Kalidou Koulibaly would certainly cost more than Maguire, hence why the England defender is wearing United’s No.5 shirt while the Senegal defender prepares to face Liverpool again on Tuesday. But Neville’s instinct that United remain short of another top-class centre-back is correct. Koulibaly might cost in excess of £100million and he would be 29 at the start of next season – two reasons why Woodward will most likely look elsewhere – but the Napoli defender is best out there who might be available. Is that not the level United should be aiming for? And their greatest defences have always been built on rock-solid partnerships.

The chasm between his defence and attack is Solskjaer’s biggest problem with perhaps the fewest available solutions. And the void is only going to widen when Pogba starts making a play for Real Madrid again next summer. Solskjaer has plenty of worker bees to shield his defence and as Neville surmised, the fee it would take to get Declan Rice out of West Ham would be too high a price for a player who, at present, offers little more than United already possess. Pogba aside, Solskjaer doesn’t have a lock-picker. If the record signing cannot be satisfied to stay, might Bruno Fernandes finally get his move and Sporting Lisbon their £60m-£70m pay-day?

With De Gea’s deal done while Rashford and Martial slug it out to prove themselves worthy of the central striker’s role, Solskjaer has to focus now on building from the inside out. But Neville is right: with three more players to stiffen the core, assuming United can identify them and Woodward deliver, the Red Devils could have City and Liverpool looking over their shoulders rather than just at each other.