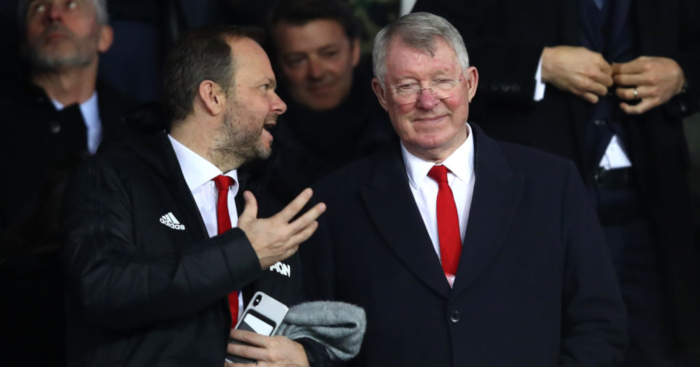 George Best, Ryan Giggs and Cristiano Ronaldo sent hordes for the Pink with a feint of a foot or a drop of the shoulder. But when it comes to throwing dummies, Ed Woodward is the modern king of Old Trafford.

The Manchester United executive vice-chairman is currently in the midst of his 13th transfer window with the Red Devils and – just like too many of the dozen before – the former investment banker is not knee-deep in world-class players throwing themselves at his feet, but up to his elbows in the sh*t, dragging Ole Gunnar Solskjaer down with him. The difference between the pair, though, is that Woodward is immune to the stench and knows perfectly well how to keep his head above the surface.

Solskjaer was appointed as caretaker boss just before the darkest day of winter and though his sunny disposition parted the clouds for a few glorious weeks, here we are on the summer solstice and there seems little light on Old Trafford’s horizon.

There is no Champions League football within view, no title challenge while Liverpool and Manchester City set the standards, and little chance of regaining a top four place while Woodward continues his willful botch job of the rebuild required to bring United back to a level that not so long ago would have been unacceptable even as the minimum.

Woodward, who has chosen to retain the self-appointed role as project manager despite the scale of the job dwarfing his credentials, let it be known that the finest craftsmen would be hired to restore United to former glories. United fans were led to believe – via a string of stories planted to build a buzz around the likes of Jadon Sancho, Declan Rice and Matthijs De Ligt – that no expense would be spared in giving Solskjaer the necessary tools for arguably the toughest job at the top level.

Now work has begun, once more, Woodward’s bluffing is being exposed for exactly what it is. Solskjaer was seemingly promised fixtures and fittings from Harrods but, for the most part, the United boss is having to make do with what he can grab from the middle of Lidl.

That is not to say that a bargain cannot be found. Indeed, the signings of Swansea’s winger, Norwich’s right-back and Newcastle’s rookie midfielder could lead to a more sustained improvement than whatever a quick fix of Galacticos might bring, but United’s recruitment approach smacks far more of budget-slashing by the world’s third-richest team than savvy planning.

Solskjaer wanted £100million-rated Sancho; he got Dan James for £15million. United targeted Rice; now they are chasing after Sean Longstaff for half the price. Having recognised that perhaps De Ligt does not in fact have a cake problem…well, God knows who Solskjaer might be given to fill the gaping void at the heart of his defence.

It is possible that De Ligt was never attainable anyway. But Harry Maguire is. Not that Woodward recognises the opportunity before him. Or, if he does, he has absolutely no intention of seizing it.

The vice-chairman briefed journalists at the end of last summer on the eve of the new season about why none of Jose Mourinho’s defensive targets had been delivered. In that cosy chat at Carrington it emerged that United had asked Leicester about Maguire after the World Cup but were put off by the asking price and the prospect of having to pay the kind of figure that Liverpool forked out for Virgil van Dijk the previous January. A year on – during which Maguire bolstered his credentials and Van Dijk demonstrated the influence a top-class centre-back can have upon a team – the England defender’s value has increased but his price seemingly has not. Leicester do not wish to sell – but they would for a few quid more than Liverpool paid for Van Dijk.

United’s approach: offer the Foxes half that amount. A low-ball bid with no chance of acceptance intended only to offer the illusion of intention.

Crystal Palace had their time wasted in a similar fashion with United’s opening bids for Aaron Wan-Bissaka. It seems Woodward is getting closer to a proposal which verges on satisfactory but, unlike the demand for Maguire, there is little credible interest from elsewhere in Palace’s right-back. Woodward’s tactics put United in unnecessary danger of losing a one-horse race.

That would come as no surprise while Woodward is in the saddle clutching the whip. For all the talk of a need for squad reinforcements, their greatest expertise void is to be found between the bench and the boardroom.

Even Woodward acknowledged that void – or rather, he pretended to – before he axed the third manager of his six years in power at Old Trafford.  Mourinho’s sacking was the removal of the last major hurdle between United and the belated appointment of their first sporting director and word was that Woodward would have the right man in place in time for this summer.

Solskjaer’s success, fleeting though it was, freed up the time that would have been earmarked for “a thorough recruitment process for a new, full-time manager” yet six months on, United appear no nearer nailing down a job specification, let alone a suitable candidate. Woodward has spoken to the likes of Rio Ferdinand and Darren Fletcher about seemingly undefined roles but yet this latest “shambolic” failure reeks of previous ploys of playing for time while retaining the power bestowed upon him by the Glazers.

To the owners, Woodward is seemingly bulletproof. While the Glazers’ trough continues to swell and the vice-chairman’s bluffing shields them from pleas to allow the club the necessary access to its own money, then there will remain no appetite for change. Or, indeed, progress.