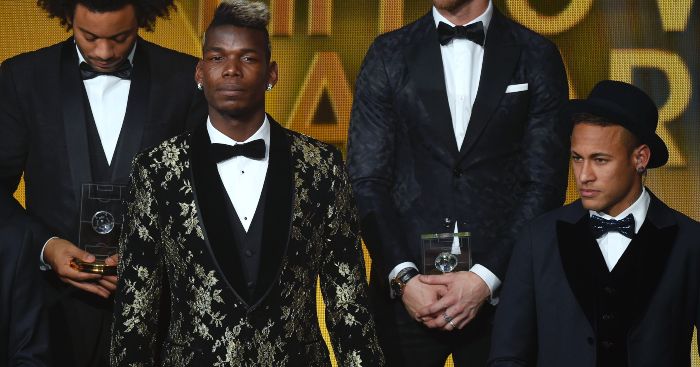 As a leading player among the established elite, Manchester United would likely baulk at the prospect of imitating nouveau-riche Paris-Saint Germain. But despite rising to power from contrasting backgrounds, the two clubs currently have more in common than the Red Devils might be prepared to admit.

United and PSG are in the unfamiliar position of finding themselves on the sh*tty end of the transfer saga stick, bogged down in palavers which threaten to overshadow pivotal summers for both clubs. The hierarchies in Manchester and Paris would rather the world focused on them flexing their own financial muscles as they pillage other clubs but, instead, both boards are preoccupied by attempts by Spanish giants to plunder their prized assets.

Neymar and Paul Pogba are each desperate to leave PSG and United respectively and neither are afraid to say it. Both have spoken of their desire for ‘new challenges’, Neymar seeking another only two years after he arrived in Paris looking for his last one.

There is one crucial difference amid the ever-changing landscape of the transfer window. Pogba reluctantly reported for United duty at the end of his summer holidays; Neymar interpreted PSG’s summons back to Paris as a request rather than a demand. Subsequently, he is officially AWOL.

Pogba certainly looked as though he would rather be anywhere else when he returned to Carrington on Sunday morning before being ushered onto the plane which took the midfielder and his United team-mates as far away from Manchester as they could feasibly travel. His presence in Australia grants United further licence to maintain their ‘nothing to see here’ stance over Pogba’s future. But refusing to acknowledge the problem in public does not resolve a huge problem in the dressing room.

Ed Woodward and his minions within the boardroom seem to view Pogba’s desire to quit as a personal affront. In many ways it is. The France star, like everyone outside the club, has observed the shambles enveloping Old Trafford – though he evidently lacks the self-awareness to recognise his role in its development – and he does not want his reputation to be tarnished by association any further.

United’s attempts to save face by refusing to publicly acknowledge the Pogba problem are having the opposite of the desired effect. It is widely reported that United would be willing to sell their record signing for a hefty profit on the £89million they paid Juventus three years ago but Woodward is too proud to say so. Which is strange because a sale of anything close to £150million would represent savvy business, which is what United value most these days.

Instead, while Pogba’s stated desire for a move hangs over Ole Gunnar Solskjaer’s squad while Mino Raiola blows enough hot air to keep the discontent rising, United are maintaining what they presumably see as a dignified silence.

PSG, on the other hand, confronted their problem head on and, consequently, seized control of an unwanted situation.

Within hours of Neymar’s no-show on Monday, the Parisians had responded with a pitch-perfect statement of their regret and the promise of recrimination for the world’s most expensive player. Almost immediately, sporting director Leonardo doubled down on the club’s stance.

“Only one thing is certain today: he is under contract with us for three years. And since we have not received an offer, there is nothing to discuss.

“We have not received any offers. But we have had, it is true, superficial contact (with Barcelona). They said they want to buy him but that we are not selling. It was [Barca president] Bartomeu who said that. But we have not seen that Barcelona are truly in a position to buy him.

“A move of this magnitude is not just a question of emotions. It is a financial question. Neymar can leave PSG, if there is an offer which suits everyone. But up to now, we do not know if anyone wants to buy him, or at what price. It will not be done in a day, that’s for sure.

“PSG want to count on players who want to be here and build something big. We do not need players who are doing a favour to the club by being here.”

Leonardo could barely have stated any more clearly PSG’s reluctant readiness to part with their most-talented player. But rather than paint the Parisians as surrendering or submissive, PSG have now assumed the high ground.

Immediately, it would lift the Pogba fog (Fogba? No, sorry…) currently stretching the 15,000 miles from Old Trafford to Perth while shifting the spotlight on to Florentino Perez. Real have willfully fluffed Pogba’s ego and the player’s belief that a deal will be done, despite demonstrating little appetite to stump up the necessary funds.

Real’s approach in this instance, unlike the other five big-money transfers they have completed so far this summer, seems to be to wait and play on Pogba’s desperation and United’s exasperation as the deadline approaches. The Red Devils’ silence only serves to encourage Perez to sit tight.

In the meantime, United’s pre-season preparations will mostly be spent on the back foot while PSG run with the initiative.